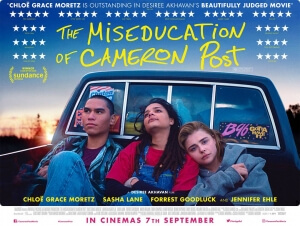 BASICALLY…: After getting caught in a compromising position with another girl, teenager Cameron Post (Moretz) is sent to a Christian gay conversion therapy centre…

If you’ll remember, back in June I reviewed the film when it screened at the Sundance Film Festival in London, and at the beginning I teased how you could expect a second review when it would officially be released in cinemas. I did so because I wanted a little bit of time to pass before seeing it again, in case there were things I picked up on the second time that I didn’t get a chance to talk about when I first reviewed it… but as it turns out, there isn’t a whole lot left to say about this one. My thoughts on it remain the same, including everything I liked about it to the things I wasn’t as keen on, so consider this review as something of a contractual obligation; something I don’t necessarily need to do, but might as well since I promised a second look at it for your reading pleasure.

The story, in case you’re unfamiliar, is of teenager Cameron Post (Chloë Grace Moretz) who is sent to a Christian camp that practises gay conversion therapy after she is caught making love to another girl at prom. There, she struggles to go along with the program, despite the calmly threatening tone of the camp’s director Dr. Lydia Marsh (Jennifer Ehle), but she ends up making a couple of friends there including the one-legged Jane Fonda (Sasha Lane) and Adam (Forrest Goodluck), with whom she bonds over their shared disdain for the camp’s practises and complete disregard for homosexuality as a whole.

I’ll just say right now that if you want a more detailed analysis of this film, you might as well check out the first review by clicking here, because this isn’t really go into specifics about why I thought this movie was nothing more than pretty decent. As I remember stating before, it’s a movie with themes and attitudes that really do piss you off, as this camp and its beliefs about same-sex attraction – even comparing gay people to drug addicts at one point – are just horrendous to comprehend, but not as much as the thought that people back then – this is set in the early 90s – could be so closed-minded about homosexuality that they could just dump their offspring at this evil place and force them to “get better” instead of embracing who they are. I just wanted to punch Ehle’s character in the face every time she shows up, because in my mind anyone who enforces an incorrect belief unto people about themselves that can warp their state of mind for purely religious reasons is one of the many definitions of evil; she and her practises cause many people at this camp to subtly be extremely tragic figures thanks to her incessant brainwashing, including her own brother (John Gallagher Jr.) who you really feel for because he is clearly uncomfortable in his new hetero skin despite his chirpy attitude and insistence that he has never been better.

I found a lot of these other characters a little more interesting than the main person we’re meant to be following, and that’s not Moretz’s fault as here she’s as good as she’s ever been, but her character is written to be more of an observer and audience perspective than a truly defined character in her own right. I don’t really have a problem with her character, nor with how director and co-writer Desiree Akhaven writes her, but to me she just didn’t seem as interesting as some of the other people there with her in the scene.

That’s really all I have to say about this follow-up review, and I do apologise if this wasn’t up to the standards I usually try and set for this website; but I guess that’s what happens when I promise something I can’t really deliver on. It’s a good movie, but it’s not worth writing two times about.

The Miseducation of Cameron Post is… you know what, just read the original review for this film to read my final thoughts, because they’re practically the same as they are now.