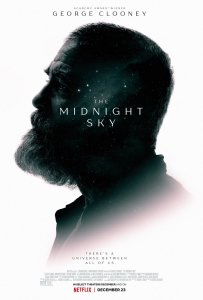 BASICALLY…: In the wake of a mysterious global catastrophe, a lonely scientist (Clooney) sets out to stop a group of astronauts from returning home…

You can’t blame George Clooney from taking some time away from the movies. The actor, filmmaker, philanthropist and all-around charming guy has had a busy few years, taking care of his young children with wife and human rights lawyer Amal Clooney, and raising awareness of social issues such as gun control and homophobia, which for a guy with the film catalogue he possesses from big blockbusters to smaller awards-friendly fare, seems justified enough.

However, for his seventh film as a director – and his first on-screen performance in four years – Clooney returns with gusto and heavy ambition, even going so far as to dropping an intense amount of weight and growing out a scruffy Santa Claus-like beard for his lead part in The Midnight Sky. You can tell, both in his acting and his filmmaking, that Clooney has high hopes with the material, and is clearly giving it all he’s got in both departments – yet the film itself, and specifically its script, can’t quite break the barriers it obviously wants to break.

The film is set in the year 2049, a few weeks after a mysterious global catastrophe has devastated the planet, forcing many people to take refuge underground. One of the last remaining people to remain above the surface is Dr. Augustine Lofthouse (Clooney), a scientist left alone on an Arctic base to monitor the atmosphere, which is increasingly becoming more and more uninhabitable, and keep an eye on anything just outside of Earth’s range. He’s all alone, naturally, until the sudden discovery of a young, mute girl named Iris (Caoilinn Springall) who appears to have been left behind following the base’s mass evacuation. As if that wasn’t enough, Lofthouse discovers that a spacecraft named Aether, carrying a human crew that has spent the last two years in space (and are thus unaware of what’s been happening back home), is slowly approaching. Among the five-person crew is Sully (Felicity Jones), who happens to be pregnant and therefore unintentionally carrying the potential future of her species, and to stop the crew from touching back down and dooming humanity, Lofthouse – with young Iris in tow – must race across the barren Arctic wasteland to communicate with the crew before it’s too late.

In recent interviews, Clooney himself described the film as a cross between The Revenant and Gravity (which Clooney co-starred in), and he’s not wrong; aside from the fact that the film’s writer, Mark L. Smith, also co-wrote the script for Alejandro G. Iñárritu’s freezing-cold epic, there are similar themes at play here from the isolation of its main character to the fierce battle for survival in un-survivable conditions. Meanwhile, Clooney clearly took heavy inspiration from working on Alfonso Cuarón’s sci-fi thriller, for his own scenes involving intense space walks, deadly debris and the calm, collected mannerisms of the crew (Cuarón’s Oscar-winning stunner, for all its glory, did lack a sing-along to Neil Diamond’s “Sweet Caroline”, which Clooney makes up for here in spades). As a filmmaker, Clooney definitely exhibits great passion in bringing his little mish-mash to life, incorporating some strong, colourful cinematography both on land and in space, and while the effects aren’t quite as spectacular as something like Gravity (there are a couple of green-screen shots which are noticeable, to say the least) there’s clearly a lot of effort that’s gone into making them look as real as possible.

On-camera, Clooney also gives a solid performance that carries most of the film, and the connection he shares with his young, steely-eyed co-star Caoilinn Springall provides a couple of well-meaning, heartfelt moments. The rest of his ensemble, from Felicity Jones to David Oyelowo to an always-watchable Kyle Chandler do strong emotional work as well, and make you care about the characters enough to not want anything particularly bad to happen to them (which, given the dangers of both space and the Arctic, is bound to happen at some point).

The film’s biggest problem, though, lies in its script. For all of Clooney’s strong ambitions both in front of and behind the camera, he can’t quite shake some of the contrivances that Mark L. Smith’s writing tends to rely heavily on to move its plot forward, some of which threaten to derail the movie entirely. There’s an extremely obvious twist involving one of the characters, which you can guess as soon as you understand the circumstances of their appearance and the certain behaviour they display (as well as the inclusion of a few choice, if wholly unnecessary, flashback sequences), and it gives the movie an unnecessarily corny tone that’s narratively eye-rolling in a film that is desperately trying to be sincere and genuine. The characters themselves, well-performed though they may be, are largely thin and underdeveloped; the only reason you do care about them is because the performances are strong, because otherwise there aren’t that many dimensions to them other than being walking representations of Earth’s best and brightest.

If the script had been tweaked to remove, or at the very least severely alter, its far cornier aspects and give some of its characters a lot more personality, then perhaps The Midnight Sky would have been the triumphant return to movies that George Clooney needed. Instead, it’s merely okay; a passable opinion for a middle-of-the-road sci-fi epic, but something of a disappointment for a Hollywood giant with ambition and heart to spare.

The Midnight Sky sees George Clooney return as both director and actor for an ambitious, well-intentioned sci-fi drama with good performances and passionate filmmaking, but they’re somewhat wasted on a script that opts for heavy contrivances and thin characterisation which doesn’t flesh out the story or its participants like it really should.

The Midnight Sky is out now in select cinemas across the UK, and will be available on Netflix from Wednesday 23rd December 2020.