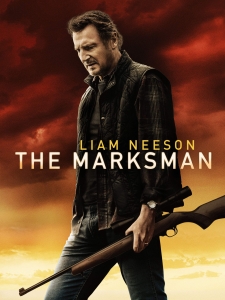 BASICALLY…: A widowed rancher (Neeson) is entrusted to protect a young Mexican boy (Perez) from a deadly cartel…

In an almost self-aware moment during The Marksman, two main characters watch a Clint Eastwood movie on TV in a rundown motel. The clear connection lies in the fact that director, co-writer and producer Robert Lorenz is a frequent collaborator with Eastwood, serving as producer on a number of his films and even directing the star in his own filmmaking debut Trouble with the Curve; naturally, the nod to Eastwood is an offer too good for Lorenz to pass up here.

However, the moment also reeks as self-aware because the film itself is all too eagerly trying to replicate director Eastwood’s grim, gritty style of neo-westerns that he’s become known for in his later years. Lorenz, of course, is not quite as experienced a filmmaker as Eastwood (The Marksman being only his second film as director), and so he only manages to ape the most basic attributes without diverting to more interesting, less predictable areas that his script is able to go.

The Marksman quickly introduces us to Liam Neeson as Jim Hanson, a widowed Arizona rancher and former Marine (and, if one were to swap the “a” for an “e”, also the creator of the Muppets) who spends his days reporting illegal crossings from the Mexican border. One day, he comes across a woman and her young son Miguel (Jacob Perez) who have crossed the border in order to get away from deadly cartel members, who are after them as retribution for stolen money. After the mother is killed by brutal gangster Mauricio (Juan Pablo Raba), Jim decides to honour her dying wish and take Miguel across the country to live with relatives in Chicago; they are, of course, pursued along the way by Mauricio and a small group of thugs who will stop at nothing to take both Jim and young Miguel down before they reach their destination.

It’s more or less a typical neo-western, sometimes playing out like a studio-notes version of No Country For Old Men if the executives demanded more shootouts and less atmosphere instead of the far more nuanced version that we thankfully got. Disappointingly, though, The Marksman sticks closely to numerous conventions shown in not just the Coen brothers’ modern classic but a lot of latter-day Eastwood movies as well, with a script that follows particular guidelines down to the letter, and characters who fit the standard archetypes like a glove. The predictability of the story makes it easy for the viewer to point out whenever certain obstacles are going to be introduced, or where the paths of certain individuals are going to lead; as a result, the tension is muted at best, because you already have a good sense of what is eventually going to happen, long before even characters in the movie have a chance to experience it for themselves.

Beyond its underwhelmingly traditional narrative, The Marksman does suffer from a number of plot threads which are left hanging throughout, and only serve to make the movie much more unnecessarily padded out. There is a subplot involving Neeson’s stepdaughter who is a border patrol agent that is at first set up to be a major supporting player, like she’s going to be the equivalent of Tommy Lee Jones to Neeson’s Harrison Ford in The Fugitive, but very quickly it becomes apparent that the movie has absolutely no idea what to do with her, and ends up side-lining her so hard that she may as well have been cut out of the entire movie. Other strands involving corrupt cops and other factions of this villainous cartel across the country are quickly forgotten about, while Juan Pablo Raba’s stock villain mostly just stands around staring intensely for no apparent reason other than he’s supposed to be the bad guy.

The film works best when it does focus on the growing relationship between Liam Neeson and the young ward he’s been entrusted with. The casting of Neeson is a major coup for this movie, because as ever the actor brings his gruffness and hard-boiled attitude to a character that Clint Eastwood would most certainly have played back in the day (hell, he could still play him now at age 91), and his scenes with young actor Jacob Perez aren’t as cloying or sappy as they could have been. Oddly, though, there are precious few scenes where the two of them are shown legitimately bonding – that TV scene being just one of them – because most of the movie is dedicated to them escaping from the cartel members in ways that just make you want to watch something like No Country For Old Men instead.

Try as Lorenz might, he cannot get The Marksman up to the standards of his frequent collaborator, leaving it a mediocre mess that you’ll quickly forget about, especially when you think about the numerous other neo-westerns that do this very familiar plot more interestingly than this.

The Marksman is a mediocre neo-western that follows the typical conventions as popularised by Clint Eastwood all too closely, leaving little room for much individuality despite a good lead turn by Liam Neeson.

The Marksman is now available on Amazon Prime Video.