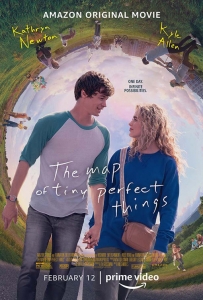 BASICALLY…: Two teens (Newton and Allen), both stuck in a continuous time loop, become closer as they experience the same day over and over…

Before we go on to talk about The Map of Tiny Perfect Things, spare a thought for another noteworthy time-loop movie we should have gotten already.

Last year, time-loop movies in the same vein as Groundhog Day, Edge of Tomorrow and Happy Death Day received a potentially game-changing new teammate in the form of Palm Springs, a comedy which wowed the Sundance Film Festival in January 2020 so much that it set the then-record for the most a film has been sold to a distributor for by exactly 69 cents, received a record-breaking number of views when it debuted on US streamer Hulu over the summer, went on to appear on a number of critics’ end-of-year best lists, and even just earned itself two Golden Globe nominations including Best Picture (Musical or Comedy) and Best Actor (Musical or Comedy) for leading man Andy Samberg.

Unfortunately, most of us Brits (at least, the ones who haven’t seen it on Hulu via a VPN network) still have yet to see it, since it’s not due to debut on Amazon Prime Video until April, as part of an international distribution deal. It’s not that far off now, but after all we’ve heard the last year-and-a-bit about how awesome Palm Springs is, it’s all the more frustrating that we have to wait just a little bit longer before we can finally judge it for ourselves.

At least there’s some good news in that until Palm Springs finally debuts over here, we have The Map of Tiny Perfect Things to tide us over until then, because it’s a time-loop movie that’s got charm, heart, and a couple of very charismatic lead turns who make going through the same thing over and over again far less intolerable.

When the movie starts, 17-year-old Mark (Kyle Allen) is already deep into the mysterious phenomenon that is resetting the clock every 16 hours, and knows practically every little thing that occurs in his tiny town over the course of this one day. His routine, however, is unexpectedly disrupted by the arrival of another teen caught in the “temporal anomaly”: she is Margaret (Kathryn Newton), whose attitude to the whole thing is a bit more inquisitive than Mark’s, but the two of them do eventually bond over their mutual predicament. They soon set out to capture the little moments around them throughout the day that they record onto a map, which inspires them in their own way to look at their time-loop in wildly different ways.

It is a little ironic how a lot of these time-loop movies, no matter how good or entertaining, often tend to repeat certain formulas over and over again; the main person(s) react to being caught in the loop, start to mess around with things and people unaware of said loop, wax philosophical about the true nature of the loop, and eventually break out of it after going through some form of meaningful character arc (often from jerk to not as much of a jerk). The Map of Tiny Perfect Things is partially guilty of this as well, and doesn’t offer any new twists or turns to the actual circumstances surrounding the loop itself. Nonetheless, it makes up for its formulaic outline with a ton of good-natured charm that’s boosted by a witty, pop-culture littered script by Lev Grossman – adapting from his own short story of the same name – and some smooth direction by Ian Samuels, who takes advantage of some of the repeated occurrences throughout this day with a couple of carefully choreographed sequences captured in one take. Both Grossman and Samuels inject liveliness and surprising intelligence into their respective writing and direction, making the characters’ shared plight believable enough to see why they may be either frustrated or nonchalant about their mutual situation.

There is also plenty of credit due to the casting of both Kyle Allen and Kathryn Newton in these lead parts, because the two of them really work well together due to a strong chemistry between them as well as having some precious individual moments that only solidify their capability as leading actors. In the wrong hands, or even written any differently, and these would have been two characters that quickly got on people’s nerves; in an alternative reality, these two millennial teens swapping theories about the fourth dimension and casually dropping references to Greek mythology figures like Sisyphus into conversations could easily have come across as false and pretentious. However, Allen and Newton are great at making you really like their characters, in smaller moments where they are able to just be a pair of genuine people who you actually want to see work things out for themselves and each other (plus, the way it’s written makes it easy to buy the possibility that because they’ve been in this loop for some time that they’ve spent part of it reading every book in their library at least once).

There are a couple of holes when it comes to the mysterious nature of this time-loop itself, as it becomes clearer that it might all be much more reliant on handy conveniences than first thought, and as endearing as the script is, it’s still open to some very corny romantic lines (which, given that it’s come out around Valentine’s Day, I suppose seems appropriate). It’s not the ground-breaking time-loop movie that people have been hyping up Palm Springs to be, but it’s a perfectly harmless and sweet enough movie to appease younger couples and even entertain some of the older crowd as well.

I’m sure that whenever Palm Springs does finally come out in the UK, it will pretty much blow The Map of Tiny Perfect Things out of the water, but it’s not as though the other option is really all that bad in the first place.

The Map of Tiny Perfect Things is a charming and very likeable time-loop movie that benefits from decent writing by Lev Grossman (adapting from his own short story of the same name) and two very impressive lead turns by Kyle Allen and Kathryn Newton, who share some strong chemistry and are also charismatic enough to make you buy some of the more formulaic turns this movie takes.

The Map of Tiny Perfect Things is now available on Amazon Prime Video.