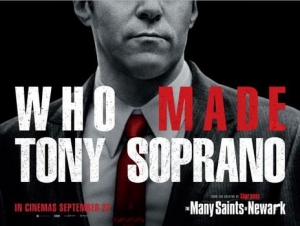 BASICALLY…: In 1967, young Tony Soprano (Gandolfini) becomes drawn into a life of crime by his uncle (Nivola)…

The Sopranos, considered by many to be one of the best TV series of all time, ended on a rather abrupt note in 2007, with an infamous cut-to-black conclusion that has left fans frustrated ever since. The death of lead actor James Gandolfini a few years later would further hammer the nail into a possible series reprisal, meaning that we will never know what came of mobster Tony Soprano after that controversial finale.

But that doesn’t mean we can’t see how he came to be Tony Soprano in the first place. This is where The Many Saints of Newark steps in to fill the gaps, serving as a theatrical prequel to the series that features numerous younger versions of familiar characters, and a dreary tone which matches the grounded, harsh gangster themes of the show. For fans, it’s bound to be a treat; for newcomers (such as, it has to be said, myself), it might be a bit trickier to get absorbed into the far-reaching drama, but it’s entertaining enough to at least make you interested to learn more about it.

We begin in New Jersey during the late 1960s, as mobster Dickie Moltisanti (Alessandro Nivola) – the uncle to a young Anthony Soprano (Michael “son of James” Gandolfini), who idolises Dickie more than any other family member – greets his elderly father Aldo (Ray Liotta) and his new, much younger Italian wife Giuseppina (Michela De Rossi) at the harbour. His attraction to the incredibly beautiful Giuseppina, though, only adds to a list of his worries; he’s embedded into a fierce gangster culture where he’s wrestling for control, at a time when racial tensions are also threatening to boil over, the latter represented by numbers runner Harold (Leslie Odom Jr.) who’s keen to conduct his own business with the mob despite their blatant racism. All the while, Dickie must take it upon himself to serve as some kind of role model for his nephew, who can only watch as those closest to him succumb to the world he will one day become a part of.

Although The Many Saints of Newark has been advertised as a full-on Tony Soprano origin story, with Michael Gandolfini apparently taking centre stage, the character is actually a supporting player here (Gandolfini doesn’t even show up as the character until about halfway through). Instead, it is Alessandro Nivola who takes centre stage as Dickie Moltisanti, serving as the gateway perspective into this very bleak and unforgivably violent world of mobsters, and he absolutely owns every minute of it. It’s honestly a shame that there isn’t more of this performance or character to come in the series’ continuity, because Nivola is so good here that you actually do want to see what else he gets up to, even though he keeps on doing horrible things in typical gangster fashion. He has good chemistry with young Gandolfini, enough for you to buy why young Tony Soprano would look up to this guy as someone to aspire to one day be, and he acts well opposite his many co-stars, from Ray Liotta as his volatile father, to an excellent Michela De Rossi as his desirable new step-mother, to other actors like Jon Bernthal, Vera Farmiga and Corey Stoll playing a number of faces that fans of The Sopranos will instantly recognise. Most of all, though, Nivola is a strong enough actor to carry entire scenes on the strength of his natural charisma alone, especially as it dawns on you that the film is predominantly going to be about him and not Tony Soprano as the (rather misleading) trailers indicate.

The movie is entertaining, and does a good job at keeping things consistently interesting by bringing in political and cultural subtexts of the time (a section of the movie takes place during the New Jersey race riots of 1967), and dealing with new character arcs which may or may not end in some kind of tragedy – this is a gangster movie, after all, so you can count on there being a fair bit of bloodshed. As a fresh newcomer to the world of The Sopranos, however, I did find myself getting a little lost in some of the details, which are clearly there for fan-service moments that might be lost upon anyone who never watched the series in its entirety. There are a lot of characters in this movie, which makes it difficult to pinpoint who plays what role in the overarching plot, while at times there are plotlines and characters that drop out entirely before coming back after a point where you forget they were even a part of the story to begin with. There’s even one bit of double-casting which is a little ridiculous, since it screams of “we couldn’t get the actor we wanted for this part, so to save some money we got this one person to play two different roles instead”, but it didn’t completely ruin the overall vibe because, again, this actor is still good in both parts.

It is a handsomely crafted movie, with director Alan Taylor – who directed several episodes of The Sopranos – firmly grasping the dour tone of series creator David Chase’s script (co-written with Lawrence Konner, another Sopranos veteran), in arguably a more confident big-screen outing than his previous blockbuster attempts Thor: The Dark World and Terminator Genisys. Some of the cinematography is gorgeously bleak, with simple shots of a building on fire or a sun-blanketed beach all giving off uncomfortable visual vibes, and of course the overall late 60s/early 70s aesthetic is respectfully adhered to without skimping on some of the grimmer historical details of the time. However, like the show (or, at least, the parts of it that I’ve seen), there is an airiness to the editing which gives it an unnecessarily sluggish pace that makes you want things to move forward sooner rather than later. That can work in an ongoing television series which allows for extended character moments and intricate dialogue scenes, but in a self-contained movie there is a larger urgency that needs to be seen to, otherwise the captive audience risks losing interest, especially those who aren’t as familiar with the original show.

While Sopranos fans will likely get more out of The Many Saints of Newark than complete novices, there is enough of an entertainment factor to get even newcomers adjusted to its intricate and highly complex web of crime.

The Many Saints of Newark is an entertaining gangster prequel which might appeal more to fans of The Sopranos than anyone, but even complete newcomers can appreciate the strong performances, intricate writing and handsome craftwork on display here.

The Many Saints of Newark is now showing in cinemas nationwide – click here to find a screening near you!