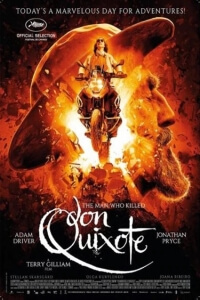 BASICALLY…: An advertising executive (Driver) is mistaken by a deluded old man (Pryce), who is convinced he is the fabled Don Quixote, for his loyal sidekick Sancho Panza and is whisked away with him on a bizarre journey…

This review is of the cut shown at the BFI London Film Festival in October 2018 – there currently isn’t a UK release date listed for this film.

To go into details about the famously troubled production of Terry Gilliam’s The Man Who Killed Don Quixote would take longer than the actual movie, but if you know anything about the severe trials and tribulations that Gilliam went through over almost 30 years of trying, failing and trying again to make this movie, then you will have probably figured out that the fact that it is finally showing to an audience, albeit at a film festival (it is currently still without a UK distributor), and that people like myself can write reviews of it, is perhaps the greatest miracle of them all.

But the real question is, after nearly three decades of development and production hell, is Gilliam’s epic and epically delayed masterpiece actually worth the wait? I’m glad to report that the answer is a resounding “yes”; of all the Terry Gilliam movies out there, The Man Who Killed Don Quixote is perhaps the most Terry Gilliam-est thing I have ever seen in my life, as it is a glorious and often magical slice of madness filled with surreal comedy, insane visuals, and a fine example of sheer filmmaking ambition that is evident in every single shot of this bonkers but beautiful movie.

The film sees Toby (Adam Driver), an arrogant commercials director, return to Spain to direct an advert featuring the fabled Don Quixote and his squire Sancho Panza, after previously travelling there to make a student film about the very same figure. He soon decides to pay a visit to the town he shot in, and finds that things have changed drastically; most notably, the elderly shoemaker Javier (Jonathan Pryce) who Toby hired to portray Quixote in his film now firmly believes he really is Quixote, and what’s more he has mistaken Toby for Sancho Panza, leading him on a strange quest throughout the desert which involves windmills, a group of foreigners who may or may not be terrorists, and a cruel Russian businessman who treats a young model named Angelica (Joana Ribeiro) with utmost humiliation.

This movie, to get it out of the way early on, is insane. However, it’s the kind of insane that only Terry Gilliam could pull off; a certain type of insanity that can feature some of the most bizarre imagery you can imagine, as well as a collection of highly extravagant production values, yet has its heart in the right place at all times. Gilliam’s long labour of love has been a source of many articles and even documentary films – the 2002 film Lost in La Mancha details Gilliam’s first disastrous attempt to make this movie with Johnny Depp and the late Jean Rochefort in the lead roles – and with this final cut, you can feel the absolutely fiery passion put into each and every shot, set, costume and performance, almost like it’s all come bubbling up to the surface after almost three decades of being suppressed. It’s all a part of that trademark Gilliam style of surrealism, which has been a huge part of his artistic identity from his early Monty Python animations to almost every single film he’s directed since then, whether they be Brazil or The Fisher King or Fear and Loathing in Las Vegas and so on; but with The Man Who Killed Don Quixote, he seems to have really gone all out in delivering one hell of a spectacle that looks and feels as if it’s come directly to life from one of his cartoons. It’s quite joyous to see it all play out in glorious live-action, with very little CGI (or at least very unnoticeable uses of it) and wonderfully over-the-top comedic performances – Adam Driver has never appeared to have had more fun on-screen, with the same being said for a joyful Jonathan Pryce – that you honestly don’t mind paying witness to a little bit of madness in the process.

There’s so much to admire about the sheer passion that is evident in every single frame of this movie, that you would almost mistake this for a style over substance flick, but in fact you find yourself really enjoying the story, the characters, and the overall journey this film is leading you on so much that you’re invested in how this is all going to play out in the midst of all this madness. All these actors, from Driver to Pryce to even Olga Kurylenko as the sex-starved wife of Stellan Skarsgård’s character, are really going the distance in making their larger-than-life characters entertaining and fun to watch, many of them succeeding, whilst also giving them some kind of empathy and humanity to make us want to watch a film about these crazy people for longer than we probably should. By the end of it all, you’re so invested in the surreality of their odyssey that you honestly don’t mind all that much about the fact that there are one or two leaps in logic that only serve to move the story along, because you’re having such a fun time on this absolute rollercoaster of a movie that you don’t really want to step back into the real world from Planet Gilliam even for a second.

Knowing the bad luck that has plagued this movie from Day One, this movie could so easily have been one giant mess that nobody wanted to clear up, and the first lot of promotional material made it out to be exactly that. But as usual, the trailers really don’t do this movie justice; this is a beautifully bonkers and passionate-as-all-hell masterpiece by a filmmaker who has endured one problem after another over nearly thirty years of making this film, yet never fully gave up on bringing this story to the world, and now that he has succeeded, I am so glad it’s been worth the wait.

The Man Who Killed Don Quixote is a magically mad and highly passionate labour of love by Terry Gilliam, whose thirty-year journey to make this film has paid off thanks to his extravagant and over-the-top style but also a story and characters that are fun and entertaining enough to keep you invested in how it’s all going to turn out in the end.