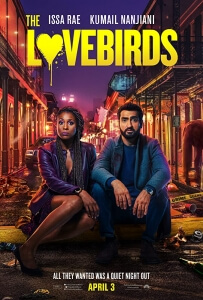 BASICALLY…: A couple (Nanjiani and Rae) find themselves caught in the middle of a murder mystery…

Remenber that movie The Break-Up? Y’know, the one where Jennifer Aniston and Vince Vaughn played a couple who decide to call it quits, only for neither of them to want to move out of their rather nice apartment? And much of the movie was spent on these two bickering endlessly with each other, like that one couple at your friends’ party whose relationship is way past its sell-by date but they’re still together for what can only be described as self-destructive reasons?

You know what that movie could have done with? A mild murder-mystery sub-plot that literally comes crashing into our movie currently in progress, and a couple of leads who don’t make you feel like you’re trapped in the middle of a 90-minute screaming match (honestly, the former would probably make it a lot less shouty). Luckily, there’s The Lovebirds to show us what that could look like in practise, and it forms part of an amusing if not laugh-out-loud viewing experience.

Kumail Nanjiani – here reuniting with The Big Sick director Michael Showalter – and Issa Rae play Jibran and Leilani respectively, who we are introduced to just as they are getting to know each other, forming an easy chemistry and a seemingly inseparable bond. Cut to four years later, and the couple are on the verge of breaking up, until they suddenly become accessories to the gruesome murder of a cyclist by a deranged killer (Paul Sparks). Fleeing from the scene of the crime, they decide to conduct their own investigation and clear their names, while also dealing with the fact that they have seriously drifted apart as a couple.

Right away, you can spot that the best aspect of this movie is the strong chemistry between Kumail Nanjiani and Issa Rae; both have previously shown themselves to be fully capable comedic, dramatic and romantic leads, from Nanjiani in The Big Sick to Rae in The Photograph from earlier this year, and together there is a genuine spark that’s hard to miss, even in scenes where they’re furiously arguing with each other. Though the script doesn’t have a lot of jokes that land (and that’s not the biggest problem with this script, as you’ll later find out), the ones that do are made even better by their deliveries because they are talented enough comedians to make a less-than-worthy line feel chuckle-some. Throughout the movie, you are given hints of why these people got together in the first place, from the way that they act with each other and playfully mock some of their ticks and tropes, and their chemistry is strong enough that you do kind of want these people to remain together, even though it’s constantly looking like they’re pulling the plug on their time together.

As for the rest of the movie, it’s a lot flimsier and not as well thought-out as the central pairing. This is the kind of plot which could easily be solved within seconds, but the characters consistently make one stupid mistake after another just so that a movie can happen; right from the beginning of their adventure, these two people constantly make things a lot worse for themselves by fumbling and rambling on and on about things which should be easy to explain to another person who’s just wandered into the middle of things, and in doing so they look and act even more guilty than they actually are. To even call it a murder-mystery doesn’t feel right, because not only is the mystery incredibly easy to solve and not interesting enough to care about, but the murder itself feels arbitrary to a lot of the other stuff that is going on, serving more as a jumping-off point for Nanjiani and Rae to swap clearly-improvised monologues with each other. As good as these two actors are together, they do ramble a lot in this movie which can start to get irritating and makes the rather short running time somehow feel a lot longer.

It’s also a very safe film, from the utterances of strong language to the nature of the violence itself, even right down to a significant scene later on in the movie where the imagery and cinematography is clearly invoking similar visuals and set-ups as Eyes Wide Shut, which at no point feels as provocative or titillating as the Stanley Kubrick film (though to compare a middle-of-the-road comedy like this to a Stanley Kubrick film feels unfair anyway). It doesn’t do much with its premise other than setting up scenes where our two leads can ramble and make things much worse for themselves, and by the time it does reach an eventual climax it feels like it was conjured at the very last minute with the least amount of imagination possible, because it does a lot of thriller climax clichés with a straight face instead of mocking or satirising them in any way shape or form.

With the people involved both in front of and behind the camera, you’d have hoped that there would be more to this film other than the natural likeability of the two lead actors; unfortunately, while it’s not a terrible film by any means – and after The Wrong Missy, it might as well be Airplane! compared to that laugh-free trash – it’s not one that is worth remembering either. Oddly enough, Netflix feels like the right home for it, because if this has been released to cinemas as originally planned, then it probably wouldn’t have had much legs on the theatrical circuit; at least you don’t have to leave the house for it, and can pleasantly forget about it at home as well.

The Lovebirds is an amusing but forgettable comedy that makes the most out of its central pairing of Kumail Nanjiani and Issa Rae, who do have strong enough chemistry to support the film, but a flimsy script made up of endless improvised rambling and overly-safe predicaments don’t do the two of them much justice.