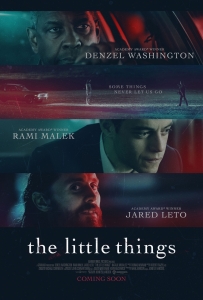 BASICALLY…: A deputy sheriff (Washington) teams with a detective (Malek) to capture an elusive serial killer…

John Lee Hancock’s script for The Little Things has been circulating Hollywood since 1993, during which the likes of Steven Spielberg, Clint Eastwood and Warren Beatty all passed on directing before the writer himself finally decided to helm it almost thirty years later. Knowing that simple fact about the film makes an unholy amount of sense, because this is most certainly the kind of dark crime thriller you would have seen during the 90s, when movies like Se7en and Basic Instinct were making waves both with audiences and at the box office.

However, were The Little Things actually made during that time, chances are it probably wouldn’t have had much lasting power as those other films, because despite a stellar trio of Oscar-winning actors at its centre, it’s largely a standard script with few real surprises and waves of familiarity.

Appropriately, the movie itself is set in the 90s; in California, to be precise, where Kern County sheriff Joe Deacon (Denzel Washington) – “Deke” to his associates – is tasked with heading to the Los Angeles Police Department to pick up some evidence attaining to a local murder case. Once there, he butts heads with the brash new lead detective Jimmy Baxter (Rami Malek), who’s investigating a string of murders that are similar to ones that Deke himself once plunged himself into as an LA detective back in the day. The pair, each with their own reasons for catching the killer, team up to find and bring the culprit to justice, eventually circling around eccentric repairman Albert Sparma (Jared Leto) whose activities and close proximity to the crime scenes make him an all-too-easy suspect.

The movie is no different than your standard police procedural drama, complete with the baggage of mismatched partners solving a case together, one of whom we learn has a haunted past, and a creepy sociopathic villain who, whether he’s the killer or not, has some serious psychological issues that should make him a threat to society. Granted, these stock parts are filled by actors who are rather good at playing said roles – Washington, Malek and Leto all do good work here, particularly Leto who seems to be having too much fun as the would-be killer – but they are stock nonetheless, in a script that often shows its near thirty-year stint in development hell with some outdated dialogue that has since become cliché in these types of movies (take two shots whenever the villain says to one of the leads, “we’re not so different, you and I”).

Hancock’s direction, in addition to his writing, is serviceable, but it lacks ambition and courage compared to films like Se7en. That movie took such a dark turn on many an occasion with its gory violence and unpleasant imagery that it was often hard to stomach, whereas here it’s a lot more streamlined, and everything looks cleaner and more refined, with even the grisly crime scenes lacking the truly warped nature that it needs to properly stand out. John Schwartzman’s strong cinematography manages to pick up some of the slack, while a moody score by Thomas Newman is always welcome, but as something clearly intended to be a throwback to 90s crime thrillers, something is definitely missing in this script to give it the spark that it needs to justify its overall existence.

One thing that does seem to be missing is much of an entire act, as this is the kind of film which will suddenly reach a climactic point without a whole lot of build-up or anticipation. Rather, it just kind of gets to that moment in the story before it even has a chance to explain itself, leaving what follows to feel somewhat like an anti-climax after spending so much time piecing together some of these puzzle pieces. Hancock obviously intended this to be a slow-burn crime thriller, one that’s more focused on characters rather than the case at large, but because few of the main characters have much depth or originality to them, they aren’t as gripping as the film perhaps thinks they are, and so when the film eventually does suddenly start to wrap things up, it comes when we still don’t know enough about them to truly get invested in what they’re thinking or doing. It also leaves the film on a note that has you asking what its overall point was, other than to put these fine actors in a scene together where they’re all trying to one-up each other in the acting department; what it was perhaps intending to say is lost in the overall mediocrity, because there isn’t much else to these familiar characters and narratives for it to stand out as anything else.

This is the kind of movie that you can easily play with your phone during, something to play in the background while you’re more focused on completing the next level of Candy Crush (and before you scream at me about movie-watching etiquette, this is being released on VOD here in the UK and not in cinemas, so whatever you do while watching things in your own homes is perfectly fine, so long as it doesn’t disturb anyone else you’re watching it with). Those who enjoy procedural dramas will probably respond to The Little Things the most, because it caters exactly to the kind of crowd that’s beginning to get impatient about the next season of Line of Duty, but those expecting hardcore and disturbing thrills as found in movies like Se7en will leave feeling a little underwhelmed, unless they’re just in it for the three leads who are, again, perfectly solid in their stock parts.

While it’s pretty cool that Hancock finally got to make his movie after almost thirty years, the end result is something that definitely feels like a 90s thriller, but with many of the decade’s tonal attributes that show its age more than anything (and I say that as someone who is also approaching their 30th birthday within the next couple of years).

The Little Things features three solid turns from Oscar-winning actors Denzel Washington, Rami Malek and Jared Leto, but they are stuck in stock parts within a standard and mostly forgettable script by director John Lee Hancock which, having been around since the early 90s, certainly shows its age with a number of tropes and clichés of a typical crime thriller of that age which feel well-worn by this point.

The Little Things is out now to rent on digital platforms, including Amazon Prime Video.