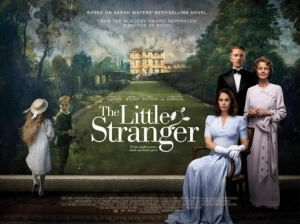 BASICALLY…: A doctor (Gleeson) returns to a stately home from his youth to tend to a patient, only to find that the family living there is haunted by an unknown presence…

Lenny Abrahamson has gone from strength to strength the past few years; though his first two films Adam & Paul and Garage sadly didn’t catch on as much as his later work, the Irish director eventually made waves with his third feature film What Richard Did, gained further praise for his comedy-drama Frank, and finally earned an Oscar nomination for directing Room, in which he also directed Brie Larson to a Best Actress Oscar.

The film he has selected as his follow-up to the award-winning Emma Donoghue adaptation may be seen by some as a rather safe venture, but even then there is still a lot to admire about The Little Stranger outside of the fact that a talented director like Abrahamson is behind it.

A period drama with hints of gothic horror to it, Abrahamson and writer Lucinda Coxon adapt Sarah Waters’ book which focuses on Dr. Faraday (Domhnall Gleeson), a lowly country doctor in 1947 who is called to Hundreds Hall, an 18th century mansion he last attended as a child, to tend to the estate’s maid Betty (Liv Hill) who appears to be ill. He arrives to find the once-magnificent house on the verge of ruin, with the house’s occupants – the Ayres family, comprised of matriarch Angela (Charlotte Rampling), her daughter Caroline (Ruth Wilson), and her son Roderick (Will Poulter) who has been left badly scarred from fighting in the Second World War – virtually left to run the place themselves with no other allies. Faraday soon begins to build a relationship with the family, particularly Caroline who he becomes enamoured with, but as he struggles to fit in with people whose class more than outranks his own, he also finds that the house appears to have an unwanted presence that seems to be haunting them.

The interesting thing about this movie is that, even though there is certainly the element of gothic horror here and there, it’s barely about the ghost at all; in fact, that part of the film, despite what the trailers seem to try and sell you on, doesn’t even come into play until way past the halfway mark. It is more a film about class and someone trying to climb the ladder that by all accounts they shouldn’t be climbing, with the acts of snobbery and feelings of being out of place being scarier than the actual supernatural presence. Gleeson’s character is one that comes from a working-class background, but since his childhood trip to Hundreds Hall has become fascinated with the lifestyle of the upper middle class, and quite selfishly sees the situation that this family is in to try and get in with their crowd and obtain the lifestyle he had only imagined as a boy. What makes the dynamic more interesting than your average peasant-meets-princess narrative is that, ironically, the people who are considerably more well-off than Faraday is are currently living as though they are virtually destitute; the estate they live on is overrun with weeds and overgrown grass, and the hallways and rooms inside are dark, full of dust, and in some cases starting to fall apart like slow-cooked lamb off the bone – yet, they still maintain a certain sensibility that shows their roots in a higher class, from wearing nice dresses to speaking in a posh manner, and can’t help but subconsciously act snobbish towards Faraday and his lower-class values. So, when lower-class Faraday woos higher-class Caroline, it’s a match that by all accounts shouldn’t work, because they both judge each other by their class and vulnerability before what they’re like as actual people, and you’re not so surprised by the direction it eventually takes because it’s a miracle that these two people who really shouldn’t end up together are actually doing so to begin with.

The film is an interesting and often tragic tale of someone like Faraday flying too close to the sun, reaching for something far beyond his grasp and in doing so making things far more difficult for everyone; in fact, as different as both films may be, you could even pair this film nicely with Abrahamson’s Frank, which is also about a character played by Domhnall Gleeson who enters into a situation at first wanting to help, but ends up making everything a lot worse than it already was, only this one has a ghost instead of Michael Fassbender wearing a papier-mâché head. While The Little Stranger probably isn’t quite as profound or emotional as some of his previous films, Abrahamson has still managed to craft a fascinating and well-made movie that serves as a bit relief after recently experimenting with themes such as abduction, rape and mental illness. The cinematography by Ole Bratt Birkeland is exquisite, bringing out the sense of dread and discomfort in these several dark rooms and their unlively atmosphere, and the acting is top notch by everyone, including Gleeson who plays this difficult character perfectly, as does Ruth Wilson who harbours such an alluring charisma under her frumpy appearance that’s hard to ignore. Will Poulter, though not on screen for as long, is also a stand-out in every scene he’s in, and I’m so glad he’s getting more work like this to show how good an actor he really can be because he’s been deserving of that for quite some time now, which leads me to believe that his big breakthrough role as a seriously great actor is on its way shortly.

As for the supernatural element of the film, don’t believe the trailers because the movie itself features very little of the ghostly activities that they seem to hint at. When they do show up, they are earned because it’s taken time to develop these characters and make the situation interesting enough, but I have the feeling that most audiences will be disappointed when they go into this expecting it to be the next big horror movie, when really the scariest thing about it is the rotten snobbery of the upper class towards the working class. If you go into it expecting that this is just going to be another solid Lenny Abrahamson movie, then chances are you’ll be far more satisfied with it.

The Little Stranger is a light but fascinating costume drama that sees director Lenny Abrahamson and his excellent cast dive into interesting themes of class and obtaining an unreachable social status, though some may potentially be let down by the intentionally minimal supernatural element, which the trailers seem to be blatantly mis-selling to a horror audience.