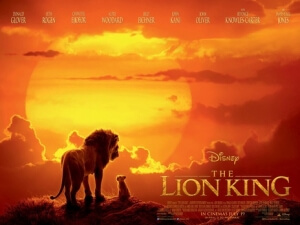 BASICALLY…: Young lion Simba (McCrary/Glover) must take his rightful place as King of Pride Rock, which has been assumed by his treacherous uncle Scar (Ejiofor)…

The Lion King circa 2019 is completely and utterly pointless, and there is no sidestepping around that fact. The original animated movie is a masterpiece, and is – and always was going to be – far superior in pretty much every capacity; from the storytelling to the emotions to the music, every single thing that the original did is significantly better than this new version, which only offers the exact same movie but done in the style of a David Attenborough nature documentary, and not nearly as effective.

You can say almost the same thing about any of the recent Disney remakes, and you would not be wrong in also saying that each and every one of them only exists to make more money for the studio, not for any kind of creative or artistic merit. It’s a method of imaginative bankruptcy that has angered many people on the Internet, and rightfully so; by simply doing their old animated classics again but with real people (or, in the case of The Lion King, photorealistic CGI that makes the animals and the backdrops look real), the studio has sacrificed any risks in putting out new and original material, instead relying heavily on brand recognition to get audiences in the cinema to see them, regardless of their overall quality. Is it a little depressing? Sure. Should we, the audience, be demanding better things instead of just blindly accepting this rehashed material? Absolutely. But the matter of the fact is, whatever I or anyone else says about this movie, you’ve already decided whether or not you’re going to go and see it; these Disney remakes are the very definition of “critic-proof”, as they make tons and tons of money despite reviews saying pretty much the exact same thing about them every single time, so just be honest and admit you’re reading this review as a mere courtesy, because you’ve already made up your mind about going to see it, regardless of its quality.

With that in mind, you might as well know a few things about this movie before going in, whether they’re good or bad, because then you’ll at least have an idea of what to expect. For instance, this is pretty much a scene-for-scene, almost shot-for-shot remake of the original; the plot, the characters, the songs, and even the same dialogue (with a few occasional additions) are entirely unaltered here, with the key difference being that instead of the colourful 2D animation we now have a fully-realised and CG-constructed replica of the African plains, and the animals are rendered as photorealistic creations to resemble the real thing. On the one hand, it does look stunning – from the sunlight blanketed over the Savannah to the smallest of details in the dried-up mud and most miniscule of insects, this is technical wizardry that is utterly breathtaking to the eyes – but on the other hand, because it is designed to look so real, the animals can’t really express as much emotion as their animated counterparts, so whenever big emotional moments happen such as THAT devastating loss, or when characters suddenly burst into song, it’s done without anywhere near as much flare, style or ambition as the original. Most of all, though, the lack of feelings from these realistic-looking lions, meerkats, warthogs et al make it feel all the more lifeless, because the photorealism ends up restricting the characters’ ability to properly express their emotions as much as the animated movie let them, and so you’re left with these hard-hitting lines of dialogue and powerful scenes being delivered as though the characters themselves could not care less about what is happening right in front of them (the voice acting, by several strong actors like Donald Glover, Chiwetel Ejiofor and James Earl Jones, doesn’t help as it ranges from mildly engaged to simply reading lines off a script in a recording booth).

However, even though this movie is by every definition an unnecessary cash-grab that does nothing new with the material, its one saving grace – other than its stunning, if restricting, photorealistic CGI – is simply that it’s The Lion King. I’ll openly admit that I got chills during the opening “Circle of Life” sequence, not because it’s done any better than the original, but because it’s the frickin’ “Circle of Life” scene, a near-perfect blend of stunning visuals, fist-pumping music and, of course, that instantly-iconic shot of the sun coming up as the opening lyrics shout at us in  Zulu. That particular sequence is done shot-by-shot and frame-by-frame the exact same, and while the original undoubtedly trumps it in overall style and pacing, it did at the very least remind me why I loved the original so much; it was beautiful, funny, intense, stylish, and respected its audience as much as it did the African traditions in which it took heavy inspiration from. Nothing in this new version garnered anywhere near as strong an emotional reaction out of me, which you could argue is its biggest failing outside of being just another easy cash-grab for the studio, but if its true covert purpose was to get people to realise the sheer majesty of the original animated classic, then it’s succeeded; I haven’t seen the film in years, but now I really want to again, not just to see how in every way it does everything this movie does better and with tons of more heart and enthusiasm, but to re-experience a true storytelling masterpiece from a studio that has struggled over the last few years to reach those same heights with their own non-Pixar/Marvel/Lucasfilm projects.

I’m certain that Disney will eventually outgrow their current trend of remaking their old classics as hollow, empty cash-grabs, and get back to delivering quality that’s on part with the undisputed originals; after all, isn’t that what the Circle of Life is all about?

The Lion King boasts stunning photorealistic CGI in Disney’s latest live-action remake, but the emotion and the enthusiasm that made the original such a beloved masterpiece is nowhere to be found in what is essentially a mere cash-grab for the studio – however, it does succeed in making you want to watch the original, and far superior, animated classic again.

Check out The Lion King showtimes in London
on Walloh.