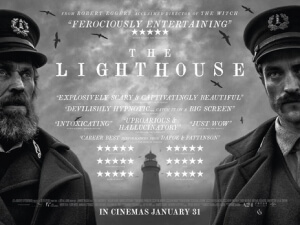 BASICALLY…: Two lighthouse keepers find their sanity start to slip away during an extended shift on an isolated island…

“Never become a lighthouse keeper”, a female audience member said directly to me as we both left the screening of Robert Eggers’ The Lighthouse at the same time. An amusing observation, but also one that is directly in line with what I figured people would think about this movie after seeing it; after all, this is not the kind of movie designed for mainstream audiences in the same way that something like A Beautiful Day In The Neighborhood is, so of course the average moviegoer would find this rather perplexing to sit through.

On the other hand, the fact that they were able to come up with such a witty response immediately upon seeing it implies that they were perhaps not too blind-sided by it to still retain a sense of humour about it. The film itself is worth seeing for numerous reasons – many of which I go through in my first review back in October – but if you are going into it a little nervous about its sheer unconventionality then you should feel relieved to know that it’s not quite as out-there as you might think it is (although, let there be no doubt, there are definitely some truly strange sights to behold here) and you can still appreciate it for the different kind of film that it successfully sets out to be.

Before then, a quick rundown of what my initial thoughts on the actual movie were, and still are after a second viewing. It’s a very simple plot, with 19th century lighthouse keepers Ephraim Winslow (Robert Pattinson) and Thomas Wake (Willem Dafoe) slowly starting to go mad during their stint on an isolated island, all of it unfolding as this incredibly intense Harold Pinter play crossed with the deep themes of isolation seen in something like The Shining – there is even an axe chase at some point in this movie too – and the thick nautical speak that Dafoe’s character constantly sputters through his gross teeth and beard, kind of like if someone cast a real-life version of the Sea Captain from The Simpsons. Director and co-writer Robert Eggers has played with some of these elements before in his previous debut feature The Witch, but The Lighthouse represents Eggers flexing these crafts on a wholly different level, and certainly more stylistically than even his last film turned out to be. It is shot in gorgeous – and pleasingly Oscar-nominated – black-and-white cinematography with a boxed-in 1.19:1 “Movietone” aspect ratio, which really drives home the bleak claustrophobia that is subtly engulfing our two lead characters, as they succumb to not just their growing insanity but also the reckless amount of alcohol they consume as the days seem to grow longer by the moment. Both Pattinson and Dafoe are exceptional as they slowly but surely deconstruct their seemingly simple personalities as the madness continuously seeps in, and they are complimented by a filmmaker who is an enormously talented visual storyteller who gets under your skin with some of the completely insane turns that he makes throughout an already intense experience.

So, in short, I still hold The Lighthouse in high regard, but the real question is if this movie is actually having the same effect on audiences, who aren’t really used to seeing films of this sort in their packed multiplexes. From what we already know about this movie’s performance, it seems that word has spread enough for this movie to do reasonably well; to date, it has grossed $14 million worldwide against its $4 million budget, so the film has already made a decent profit for distributor A24, and audience ratings on websites such as Rotten Tomatoes are fairly positive as well, so it seems that those who are seeing it are responding well enough to something that in other circumstances may have been considered too high-brow for general moviegoers. That is a major positive when it comes to a film like The Lighthouse, because it shows that such strong word of mouth can give this kind of movie a sturdy pair of sea legs, especially something that we just don’t see enough of in this day and age where bold visionary filmmakers like Eggers can churn out something so stylish and unlike much of what is actually playing alongside it in cinemas that it immediately stands out. People are increasingly leaning towards risk-takers like Eggers over safer, studio-backed fare like Star Wars: The Rise of Skywalker, which just goes to show that there is an appetite for something different and not manufactured on a conveyor belt, even though the manufactured stuff is what gets far more attention because the people behind them deem it to be so, and so a film like The Lighthouse getting so much attention from not just critics and awards bodies but also audiences who end up responding well to something they otherwise probably would never have is a very telling situation that should send a clear message to Hollywood that people want more movies like this, and not just big-budget studio fare.

The fact that it is a very good film receiving all of this attention is just the icing on the cake, so be sure to find a screening of this that’s as close to you as possible, and support its inherently different approach to filmmaking, from its direction to the acting to the dazzling cinematography and beyond. You’re not just paying to see one of the most fascinating movies of its kind to come out in recent years, but you are also actively encouraging many other filmmakers following in Eggers’ footsteps to go out and potentially make something as bold and brave as this film is, which can never be a bad thing, especially when the film in question has as many qualities as this one does.

The Lighthouse is a bold and brave slice of alternative cinema that deserves support for not just its stunning filmmaking as well as excellent lead performances from both Robert Pattinson and Willem Dafoe and some truly stunning black-and-white cinematography, but also for being unlike the majority of things you’d normally get in mainstream cinemas, which suits well for anyone looking for something different to the usual safe studio fare that they are usually given week after week.

Want to decide what the movie’s like for yourself?
Check out The Lighthouse showtimes in London
via