The Life Ahead (Review)

The Life Ahead (Review) 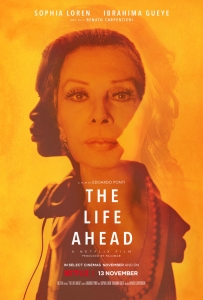 An icon of Italian cinema, not to mention one of Hollywood’s shining stars of the Golden Age of Cinema, Sophia Loren’s profile has been a lot less active over the last few decades, with the Oscar-winning actress making an active decision to take on fewer roles when she started a family in the 1970s. Aside from the odd appearance in films like Rob Marshall’s musical Nine and even small voice roles in international versions of – of all things – Cars 2, Loren has largely shied away from the spotlight, with only her legacy and retribution as one of Classic Hollywood’s most lucrative movie stars doing the work for her.

For the first time in over ten years, though, Loren finally returns to the screen for a film that greatly hinges on her star power, which even for someone now in their mid-to-late 80s seems incredibly easy to slip back into. Honestly, though, if it weren’t for her, then The Life Ahead may well have been another awards-baiting movie that would have slipped under most people’s radars; it’s not that it’s bad or even that mediocre, but by relying too much on a safe and predictable formula it’s not exactly going to be remembered as a particularly great movie either.

Loren plays an elderly woman named Madame Rosa, who we first meet in a marketplace where she is unexpectedly robbed by a young boy named Momo (Ibrahima Gueye); brought to Italy from Senegal as an infant, orphaned Momo is a bitter and street-savvy pre-teen who also works as a drug dealer for a local gangster (Massimiliano Rossi). Their paths cross once more when Rosa, a former prostitute who now operates a small day-care for children of fellow sex workers, is asked to take Momo in for a short period, which neither of them at first are completely okay with, but naturally as time goes by the two of them become closer, even when her deteriorating mental health and her traumatic memories of the Holocaust threaten to get in the way.

While the lion’s share of the focus will undoubtedly be on Loren’s comeback performance – and rest assured, the actress does some great work here – it’s really young Ibrahima Gueye’s film, with the young actor dominating nearly every scene he’s in and firmly holding his own against acting legends like Loren. Remarkably, this is his first major acting role, and Gueye is capable and strong-willed enough of a performer to allow the audience to feel his character’s emotional pain, and because he is virtually the main character of the film (contrary to what the promotional material may suggest, Loren is more of a co-lead at the most) he has the strongest arc, going from a tormented and rebellious young child to someone who’s much more compassionate and in realisation of true parental figures that his gangster boss cannot provide. Both he and Loren share a powerful dynamic together, slowly warming to each other without exactly sacrificing some of their hostile and sharp personalities, and the two actors generously manage to get the best out of each other in scenes where there isn’t even a lot of dialogue between them.

It is a testament to not just Loren’s star power but also young Gueye’s strong performance that the film itself feels tolerable even though the script is, unfortunately, not always as fresh or as vigorous as their turns. Directed and co-written by Loren’s son Edoardo Ponti – who also directed his mother in the 2002 film Between Strangers, and in 2014 for his short film Human Voice – the film, which was based on Romain Gray’s 1975 novel The Life Before Us, adopts a familiar template of two unlikely souls bonding with one another, and even goes so far as to do the irritating trope of opening quite a way into the story before then cutting back to six months earlier where the film properly begins. The addition of that cliché alone gives the audience not that good of a reason to get too involved, because it’s heavily telegraphed what’s eventually going to happen and you’re left to just sit there and wait for the movie to catch up with itself. It’s a story that also hits a lot of the same beats you would normally expect out of a film like this, from untrustworthy father figures to third-act “all is lost” moments, and it’s not that this film does those tropes badly, but the fact that you recognise them as soon as you see them speaks more about the overuse of the cliché itself, and it’s hard to think of anything else when you see them come into play here as well.

While it is a light and fairly unprovocative movie, which perhaps relies too much on formula for most of its drama, The Life Ahead can best be described as an actor’s movie through and through, one where the performances are not only the best part of it, but they are strong enough to easily carry the audience through its more familiar story beats. It’ll be interesting to see if Loren can indeed break through into this year’s already-competitive acting award nominations, and if she does then it will be largely due to the fact that she is Sophia Loren, and much like Meryl Streep every single performance she gives usually enters the conversation at some point; however, while Loren’s potential consideration will certainly be deserved for the stellar work she does here, young Ibrahima Gueye shouldn’t be left out in some areas either, for it is the strength and pure tenacity of both their performances that give The Life Ahead the boost that it needs.

The Life Ahead is a light but heartfelt drama that rests entirely on the strength of its two lead actors, including Sophia Loren who returns to the screen for a strong-willed turn that only the legendary star could deliver, and young Ibrahima Gueye who remarkably holds his own even against his more prolific co-star, which are enough to carry the film through its more predictable and formulaic script.

The Life Ahead is now available on Netflix.