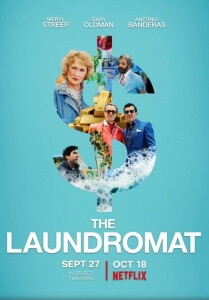 BASICALLY…: A widow (Streep) investigates a case of insurance fraud, leading her to a pair of lawyers (Oldman and Banderas) who are exploiting the global financial system…

In 2015, the “Panama papers” scandal became a major news story. It saw the financial information of several wealthy figures – from former world leaders to media personalities – leaked to the press, exposing their offshore piggybanks and even evidence of illegal activity, including tax evasion and fraud. The reaction was severe; law firms were shut down, people were arrested, politicians resigned from office, and those who weren’t even shown to be doing anything wrong – after all, offshore entities are technically legal – were scrutinised in the media for being rich to begin with.

An interesting movie about the scandal, its fallout, or even the events leading up to the leak can certainly be made. Director Steven Soderbergh, with his new Netflix film The Laundromat, is certainly trying to make that movie – but for all of his ambition, not to mention the rather incredible cast he’s gathered for it, the film is a strange failure that often feels like a missed opportunity.

Our “narrators”, if you’d like, are businessmen Jürgen Mossack (Gary Oldman, sporting a silly German accent) and Ramón Fonseca (Antonio Banderas), founders of the law firm Mossack Fonseca which was central in the Panama papers scandal. They often pop in to the movie in order to address the audience about their shady dealings and how it made them and several other people rich, like a low-energy mix of The Big Short and The Wolf of Wall Street. In between these segments is the story of Ellen Martin (Meryl Streep), who whilst on holiday is caught in a boating accident that kills 21 people, including her husband (James Cromwell). When the boating company’s insurance policy turns out to be fraudulent, Ellen turns amateur detective and discovers that the company’s address in Panama is just a post office. That sounds like it would be the main plot of the film, and for a while it seems like it indeed will be; but then, all of a sudden, we start seeing a few other stories of wealthy people from around the world, including a Nigerian businessman (Nonso Anozie) trying to bribe his spoiled teen daughter with $20 million worth of shares to keep his affair with her best friend a secret, and a shady deal in China that ends tragically for a British businessman (Matthias Schoenaerts), all of which tie in to the main scandal in some way, but nonetheless bring what should be the main plot to a complete stop.

If you haven’t figured out what the film’s biggest problem is, it is that it’s wildly unfocused. Soderbergh can’t seem to find one plot to stick with, or even one approach; sometimes it’s a meta satire of the 1%, sometimes it’s a straightforward dramatization about the events leading up to the leak, and sometimes it’s an anthology movie. Not once does it ever settle for one of these, and instead – much like the greedy rich clients it is showing throughout the film – he simply has to have it all. It leaves the film in quite a mess, with many of its high-calibre actors – among them Oscar-winners like Meryl Streep and Gary Oldman, great character actors like David Schwimmer, Robert Patrick and Jeffrey Wright (in an awful grey wig), and even those who show up for only one scene like Sharon Stone as a Las Vegas realtor – being scandalously wasted in parts that really could have been played by anybody, and don’t give them much to work with other than the self-satisfied words from Scott Z. Burns’ script.

Burns, a regular collaborator with Soderbergh, also can’t find a way to express his overall messages about greed and corruption without being so blunt about them. Heavy-handed to the extreme, the script is about as subtle as a shotgun blast to the face; constant visual metaphors will pop up (usually in the aggressively smug Oldman-Banderas segments) to show the audience how this whole thing was able to happen – a stylistic choice done far better in The Big Short, when it was just Margot Robbie in a bubble bath explaining what a subprime loan is – and the lifestyles of the wealthy are shown to be so cartoonishly over-the-top that it doesn’t even feel real. The film even ends with Meryl Streep herself addressing the issues like she’s giving a speech where she’s announcing her Presidential candidacy. It’s less like an Oscar-winning director like Soderbergh made this, but a final-year film student delivering their artsy dissertation that’s designed to win points for its “quirkiness” (read: self-indulgent mood piece that places them at the centre of attention instead of the real issue at hand).

The film doesn’t work as a movie because it’s too all over the place to try and piece together, and it doesn’t work as a rallying cry against the corrupt system because it’s way too preachy and caught up in its own pretentions to feel genuine about what it’s trying to promote. This is disappointingly messy material from talented filmmakers who should have known better than to make a film about the Panama papers scandal that doesn’t even stir enough emotion to make you care.

The Laundromat is a disappointingly underwhelming dive into the Panama papers scandal of 2015, lacking proper focus as it suddenly jumps from one plot to another, and being so caught up in its own self-indulgent teachings that it forgets to stir up any real emotions towards its controversial subject matter. Unlike the Panama papers themselves, it probably would have been better for this film to have stayed a secret.

Want to decide what the movie’s like for yourself?
Check out The Laundromat showtimes in London
via