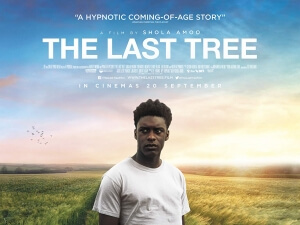 BASICALLY…: After moving from Lincolnshire to London, British-born Nigerian teenager Femi (Adewunmi) struggles to find his path in life…

For his sophomore feature, following his crowdsourced debut A Moving Image, writer-director Shola Amoo has tapped into a very personal story about identity and heritage. Taking inspiration from his own experiences, the semi-autobiographical drama The Last Tree is a captivating, quietly powerful exploration of a troubled youth in a strange new world which, as it can be for all of us, no matter what colour or creed, can easily swallow us up and spit us out if we’re not careful or mindful about our surroundings.

We first meet our main character, the British-Nigerian adolescent Femi, as a young boy (Tai Golding) living in the vast countryside of Lincolnshire. He is cared for by his foster parent Mary (Denise Black), and lives a simple yet happy existence. Things change, however, when Femi’s birth mother (Gbemisola Ikumelo) comes to claim her child, and whisks young Femi away to her dingy London flat where she immediately subjects him to her much harsher line of parenting. Later, as a teenager, Femi (now played by Sam Adewunmi) is starting to hang out with the wrong crowd, including school friends who like to pick on others including a blue-haired schoolmate (Ruthxjiah Bellenea), as well as a local gangster (Demmy Ladipo) who starts using Femi for some of his jobs. His relationship with his mother is strained, he’s not doing too well at school – so much so that his teacher (Nicholas Pinnock) begins to intervene both professionally and personally – and, like many of us at that tender young age, he is completely and hopelessly lost.

The youthful struggle to find our place in the world is a universal strife, but Amoo’s film highlights how much harder it can be for a young person with rich African roots growing up in a somewhat hostile environment. To what extent the writer-director took from his own life and put into this semi-autobiographical story, I’m not entirely sure, but the experience we’re seeing unfold feels all too real and easily identifiable with almost any audience member. There are scenes that show the gritty nature of these areas in and around London council estates, from the out-of-control classrooms at school to the streets where thugs can come out of nowhere to beat someone up, to the troublesome home life of our main character, who’s living with a mother who won’t hesitate to hit her child with a stick for misbehaving or not complying with her strict home-keeping instructions. Amoo shows us a perspective of London life that isn’t afraid to get too real, but he also doesn’t take us too far down the rabbit hole where things start to become more unpleasant and not quite as empathetic. All the time, he has us by the side of this young character as he’s experiencing one thing after another throughout his boyhood, with the efforts of tightknit cinematography, which hones in on the boxed nature of his surroundings, and carefully chosen soundtrack choices that implant a sense of hope into the dire environment (listen out for a couple of songs by The Cure during one or two poignant moments in the film).

Structurally, it’s easy to compare it to a film like Moonlight, which also explored the life of a young black boy from childhood to adolescence and beyond, and like The Last Tree it separated its time gaps through a couple of brief artistic interludes. Sadly, this movie is unlikely to reach the same level of awareness that the eventual Best Picture Oscar-winner enjoyed, but it is no less culturally important that a film like The Last Tree exists, because it offers a unique, honest and emotionally resonant look at what it means to grow up as a child of two different continents. Although he is raised primarily in Britain, Femi’s heritage is unmistakably Nigerian, with his mother inhabiting a fiercely traditional nature that extends to her rather harsh parenting tactics, but as the movie goes along and we learn more about some of the sacrifices she made so that she and her son could enjoy a prosperous new life in a different part of the world, and suddenly a character who could have easily stayed the archetypal abusive and emotionally strained mother role the whole way through suddenly feels a lot more humanised and well-rounded. An epilogue set entirely in Nigeria unpacks these themes of cultural appreciation even further, as Femi finally learns about his family history including the identity of his absent father, and partakes in some of the local religious traditions to develop a better understanding of his roots than he ever had before.

The rough, gritty nature of certain scenes most likely won’t resonate with everyone, and some characters end up getting lost in the mix – Nicholas Pinnock’s teacher comes and goes whenever the plot really needs him to be there – but the storytelling is rich and meaningful, the acting by young lead Sam Adewunmi is top-notch and easily carries the more dramatic scenes, and Amoo’s direction softly guides us on the same journey as his main character is going on, taking us through the darker corridors but towards an optimistic light at the end. It’s an impressive piece of work that I do hope finds an audience upon its release (27th September to be precise, making this a rather advance review for you lucky people), and even if it doesn’t then the people who do end up being brave enough to check it out will be treated to an eye-opening gem that feels like a sweet discovery amongst the more prolific films playing alongside it.

The Last Tree tackles heavy themes of youthful and cultural identity in a moving, carefully constructed manner, with writer-director Shola Amoo taking the audience through a meaningful semi-autobiographical tale that isn’t afraid to get gritty or hint at optimism in a hopeless situation.

Check out The Last Tree showtimes in London
via