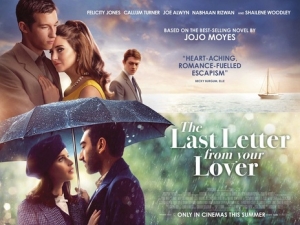 BASICALLY…: A journalist (Jones) uncovers a series of love letters from 1965, and becomes determined to find out the mystery behind them…

The last time one of Jojo Moyes’ books got adapted for the big screen, Sam Claflin decided to end his own life because being a quadriplegic simply wasn’t worth all that pesky living. Luckily, The Last Letter From Your Lover – based on Moyes’ 2008 novel – isn’t nearly as ableist, but it’s also unlikely to inspire as much heated conversation between conflicted viewers, because while it is certainly pleasant and easily watchable, it’s also pretty forgettable.

That’s an ironic use of the word “forgettable”, by the way, since memory loss actually does function as a major plot point in this movie; partially set in 1965, we begin the film as Jennifer (Shailene Woodley), a young socialite married to wealthy Larry (Joe Alwyn), is recovering from an accident which has left her with a case of amnesia. Smash cut to present day, when journalist Ellie (Felicity Jones) comes across a series of love letters during her research for another article, addressed to “J” from someone named “Boot”. Ellie digs deeper into the letters, which also sees us transported back to the mid-60s when we see, prior to her memory-wiping accident, Jennifer – obviously the “J” in this relationship – meeting and beginning to spend time with handsome reporter Anthony O’Hare (Callum Turner), who we quickly learn to be “Boot” after a character from the Evelyn Waugh novel Scoop. Inevitably, Jennifer and Anthony begin a passionate affair which, through the power of unfortunate circumstance, is brought to an abrupt end; this prompts Ellie, and her new friend Rory (Nabhaan Rizwan) to piece together the doomed historical romance and maybe, just maybe, reunite the star-crossed lovers after decades apart.

Obviously catering to the same crowd that adored The Notebook and plenty other Nicholas Sparks adaptations, The Last Letter From Your Lover is pure fluff from beginning to end. The mystery that our present-day leads are trying to solve isn’t really that hard to figure out, nor is there ever any indication that things are not going to go exactly how you’d think they would go; you know who’s going to end up with who, how they’re going to be torn apart, what lessons are learned, and everything leading up to the eventual big kiss in the rain. It’s the cinematic equivalent of reading a cheap trashy romance novel that you’ve picked up for half-price at the airport; you know exactly what you’re getting yourself into as soon as you start watching it, and it makes no false pretences about what it is or what it was brought into existence to do.

It’s entirely predictable, light-hearted to a fault, and even downright cheesy at times… and yet, I can’t say that The Last Letter From Your Lover is a total write-off. While it is almost destined to be a forgotten needle amongst the giant haystack of fluffy romantic dramas, there is something about it that keeps you hooked despite knowing all of the places it’s going to go. For one, it’s a rather well-acted film; there are some strong performances from the likes of Shailene Woodley and Felicity Jones, and both have decent chemistry with their designated romantic interests Callum Turner and Nabhaan Rizwan respectively (though in scenes where Woodley and Joe Alwyn are together as unhappy wife and husband, it can be distracting by how much they both look like teenagers playing dress-up). It’s also a nicely shot film, with cinematographer George Steel managing to capture some gorgeously lit views of the 60s Soho nightlife scene and the stunning sunsets of the French Riviera. The combination of engaged, committed performances and some handsome, and occasionally irresistible, cinematography does keep things engaging, even if they’re just something to admire as the rest of the otherwise unsurprising movie plays out.

Audiences should have no problem lapping up the drama and the romance, since it is all so accessible that even children can watch it without getting too confused (seriously, take out all of the random f-bombs and you have yourself a PG certificate movie). Critically speaking, though, it is nothing revolutionary nor shall it stick around that much in the mind, since it does so much stuff you’d expect to see in one of these movies that it’s almost inspiring how safely it plays things. No matter what, though, you’re unlikely to have a completely bad time at The Last Letter From Your Lover; as corny as it is, there is some level of charm to it, whether it’s the good performances or strong cinematography, or just the simple fact that it just is another romantic drama for the masses, albeit one that knows firmly what it is and does things to a pleasing, if unmemorable, effect. It’s not a movie I would actively want to watch again, but at least that one initial viewing was okay enough.

The Last Letter From Your Lover is a romantic drama that is unlikely to stick around in the memory, due to its wildly predictable and safe reliance on formula, but the fact that it knows firmly what it is – along with some decent performances and good cinematography – gives it a slight boost of charm.

The Last Letter From Your Lover will be released in UK cinemas on Friday 6th August 2021 (date subject to change – check the official Film Distributors’ Association schedule for any further updates).