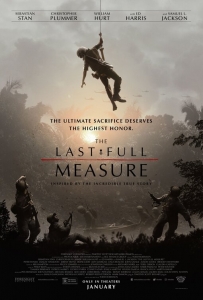 BASICALLY…: A government official (Stan) becomes determined to award a Vietnam war hero (Irvine) a posthumous Medal of Honour thirty-four years on from his heroic efforts…

William Hart Pitsenbarger was a member of the US Airforce’s pararescue team in Vietnam who went on over 300 rescue missions to aid wounded soldiers on the battlefield. Although he was killed during an enemy ambush in 1966, his heroic efforts were not forgotten by the men whose lives he saved that day, and thirty-odd years later he was awarded a posthumous Medal of Honour after years of lobbying.

All of that would seem like it would make a rather fascinating biopic, but a lot of what you have just read honestly tells you far more about Pitsenbarger as a person than the movie The Last Full Measure does, which is odd seeing how he is the central figure in all of it. Though the movie is clearly equipped with the best of intentions, and has plenty of strong acting to keep itself steady, it feels like a slight disservice to have the person who should be at the forefront of the entire thing be largely side-lined for a footnote in an otherwise incredible legacy.

Much of the film is instead spent on the efforts made by (fictional) Pentagon staffer Scott Huffman (Sebastian Stan) to posthumously award Pitsenbarger the Medal of Honour, which involves him interviewing several of the other soldiers there that day – all played by the likes of Samuel L. Jackson, Ed Harris, William Hurt and the late Peter Fonda, in his final film role – and gathering their accounts of Pitsenbarger’s bravery. We do also get to see flashbacks to the event in question, where Pitsenbarger (Jeremy Irvine) makes the fatal decision to assist his fellow soldiers in the mission that would claim his life, but they are always from the perspective of the person telling the story, and not of the hero himself.

It’s strange, because the movie goes on and on about what Pitsenbarger did to save numerous lives that day, but it never actually shows Pitsenbarger for who he is as an actual person; he is strictly a background character in a movie that’s all about his heroics, with zero backstory, an undefined personality, and barely any mention of the 300 other rescue missions that he bravely participated in. If you’re going to spend an entire movie honouring the legacy of this guy, then at least let him be an actual character so that we can properly understand why he deserves such a high-ranking medal, like a scene where he’s talking with friends or getting to know his fellow soldiers or something human like that. Instead, all of the drama and development comes from how other people feel about his sacrifice, or how people who never even met the guy fight hard to get him the long overdue recognition. For a movie that’s supposed to be about a real-life war hero that not many people know about, it’s a little insulting to have them be exclusively confined to the side-lines so hard that you know just as little about him as you did going into it; at least in Unbroken, which also didn’t do a very good job at setting up its lead real-life hero, he was a character who actually served as the true focal point of that film, instead of being shoved aside to focus on other people talking about his legacy.

Though the execution is somewhat misguided, you do believe that a lot of the people involved in this film did go into it with good intentions. When you have great actors like Samuel L. Jackson, Peter Fonda and Christopher Plummer – the latter as Pitsenbarger’s aging father – on your team, you’re going to get some pretty strong performances out of them, and they make the most of their screen time with some dedicated and even emotional turns that make you feel their pain and turmoil as they wrestle with their guilt and post-traumatic stress. It’s also a well-made movie, with director Todd Robinson clearly giving the script a sense of life along with cinematographer Byron Werner who captures some hauntingly beautiful shots at times. You can feel the passion behind the making of this film, which is definitely something to admire about it.

Sadly, its overall focus is in the wrong place. The fictional Scott Huffman character isn’t an interesting individual that we’re being asked to follow, and while Sebastian Stan does fine with the material he can’t really bring the character to life for this sort of story. It makes you want to know even more about Pitsenbarger, because not only does his character have a lot more of a rich history that’s worth exploring, but Jeremy Irvine – in the short amount of time he’s on screen – appears to have a bit more charisma and screen presence than Stan does, leaving you all the more eager to follow this guy on his own escapades instead. However, because we’re stuck with a de facto lead who’s not as interesting, it makes much of the movie feel a little more dull, only picking up the more we learn about the hero we should be focusing on instead. It doesn’t help that the film likes to get overly sentimental at times, leaning heavily on syrupy lines of dialogue and blasting the dramatic score up to eleven in certain scenes, with an ending scene that will most likely leave you cringing more than genuinely moved.

For all its noble ambitions, The Last Full Measure doesn’t do a whole lot of justice to a fallen war hero who the world probably needs to learn a lot more about, even if it’s from a far more detailed Wikipedia article.

The Last Full Measure cannot be faulted for its noble intentions of trying to honour fallen Vietnam war hero William Hart Pitsenbarger, but it fails to explore the actual hero himself or his incredible feats of bravery, instead focusing on a less interesting footnote in his legacy that leaves us without any further clue of who this guy really was.