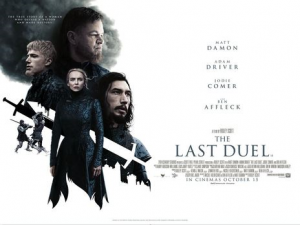 BASICALLY…: In medieval France, a knight (Damon) plans to duel against his squire (Driver) after he is accused of an unspeakable act against the knight’s wife (Comer)…

It isn’t always a guaranteed win whenever director Ridley Scott decides to make a historical epic. For every Gladiator, there is a Kingdom of Heaven or Robin Hood or Exodus: Gods and Kings; they can have big budgets and stellar casts, not to mention the presence of filmmaking power like Ridley Scott, but if the script simply doesn’t give the audience a reason to care, then there is no point to getting invested in all the swordplay.

Perhaps that is why, for his new film The Last Duel, Scott has sought some serious screenwriting talent to spice things up a little bit. Not only does it boast Nicole Holofcener, of Friends with Money and Enough Said as well as her recent Oscar-nominated script for Can You Ever Forgive Me?, as one of its writers, but also the movie’s stars Matt Damon and Ben Affleck, in their first co-writing venture since their Oscar-winning script for Good Will Hunting. All three of these writers certainly have more personality than most of Scott’s past historical movies combined, and they certainly shine through in a smart, thought-provoking and even intense script for a rather strong movie that’s perhaps the director’s best historical epic in a long while.

Set in 14th century France, The Last Duel tells the true story of a knight, Jean de Carrouges (Damon), who requests a decisive duel against his former squire Jacques Le Gris (Adam Driver), who has been accused by Jean’s wife Marguerite (Jodie Comer) of rape. At first, it may seem like straightforward medieval fare, but the film then makes an interesting turn by structuring itself as three chapters, each one showing a character’s perspective and thus their “truth” of the events. The first focuses on de Carrouges, who weds Marguerite to settle some outstanding debts, but whose knightly duties call for him to be away during the time that his wife is raped. The second follows Le Gris, who manages to work his way up the ranks and into the favour of Count Pierre d’Alençon (Affleck), and finds himself smitten with Marguerite upon meeting her, becoming convinced that she too is infatuated with him. Finally, we see things from Marguerite’s eyes, and it turns out that neither men in her life are exactly the righteous figures they envision themselves as being, and are part of a much deeper problem of rooted misogyny that she nor other women in her society can completely escape from.

The structure alone immediately makes The Last Duel a heavily intriguing film to watch, because you are effectively seeing events that unfold through very different perspectives, but each one says something about not just the character we’re focusing on in each chapter, but the world that they believe to be accurate. In their respective chapters, both de Carrouges and Le Gris fancy themselves as noble, honourable and even fanciful men who abide by societal norms down to the letter, with Le Gris in particular envisioning himself as something of a ladies’ man whose sexual conquests are legendary amongst civilians, even though the majority of such conquests are made so because of the vast power and wealth that Affleck’s Count Pierre wields. All of the romanticism is shredded as soon as Marguerite takes centre stage, who finds de Carrouges to be nothing more than a boastful braggart more concerned with his pride than anything else, and looks upon the predatory Le Gris as a deluded womaniser who ends up sexually assaulting her in the hard-to-watch rape scene. That scene hits even more disturbing notes because we also see it from Le Gris’ perspective, wherein Marguerite seems slightly more submissive and even accepting of his advances because, in his mind, she too is attracted to him; a simple yet effective contrast which speaks volumes about male entitlement and the complete lack of disregard for the female in the situation (even the cold-hearted de Carrouges, upon finding out about his wife’s rape, then basically proceeds to do the same thing).

It is a very smart script that neatly adds complexity to the scenario, and gives its central characters more dimensions as we get to see the world through their eyes. There is further richness in the dialogue, which allows them to offer different takes on certain moments; a reunion between both de Carrouges and Le Gris after a bitter falling out contains speech that is repeated in their respective chapters, but repurposed to make certain people look better than the other, until Marguerite’s much more honest telling again summarises the situation using that same dialogue. You can certainly tell the parts that both Affleck and Damon wrote – particularly the chummy, sometimes rather funny exchanges of men – and which sections Holofcener probably were in charge of, but there is a consistent voice to this film which doesn’t entirely feel like creative whiplash.

Being a Ridley Scott film, The Last Duel is certainly well-made with some effectively bleak cinematography and Game of Thrones-level gore, and the performances are strong across the board; stand-outs include Ben Affleck who is having a lot of fun as the blonde-haired fop of a count, and Jodie Comer who between this and Free Guy really is flexing her impressive versatility that makes her one of today’s most exciting performers. Both Damon and Driver excel here too, flip-flopping accents be damned – Driver has a better grasp on it than Damon does, whose native Boston voice does slip in every now and then, as does Affleck’s – and altogether the lead actors seem very comfortable with the material, which in and of itself feels content with the direction and thoughtful themes it chooses to represent. It’s a very watchable film even at its long two-and-a-half hour running time, which you only really start to feel as it makes preparations for the last duel of, well, The Last Duel.

It’s worth checking out if you’re in the mood for a smart and intriguing historical epic that ranks among the stronger that Ridley Scott has yet made.

The Last Duel takes smart and interesting liberties with its storytelling, provided by screenwriters Ben Affleck, Matt Damon and Nicole Holofcener who inject smart commentary on internal historical misogyny in one of director Ridley Scott’s stronger historical epics of late.

The Last Duel is now showing in cinemas nationwide – click here to find a screening near you!