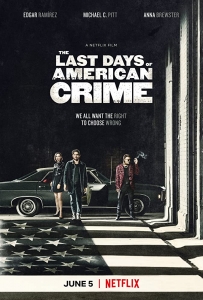 BASICALLY…: A crew of criminals attempt to pull of a major heist before a revolutionary crime-eliminating measure comes into effect…

As the world plunges into civil unrest over police brutality and fascist ideologies, the last thing we need right now is a film that glorifies both of those things, often in an unpleasant and dastardly ugly fashion that gives off the wrong vibes at this moment in history. Yet, in typical fashion, such a movie not only exists, but has been released at the worst possible time.

I can imagine those who have recently become caught up in numerous protests and violent clashes with the police over the last couple of weeks will be instantly turned off by The Last Days of American Crime, which mostly serves as tasteless exploitation for a trigger-happy right-wing audience determined to show “them liberals” how their warped version of America should be run. However, the movie holds nobody on either side in high regard, because it is an insultingly dumb assault on the senses that numbs just about anyone who watches it.

It is set in a dystopia where American crime has gotten so out of control that the government is about to introduce a high-frequency signal across the country, effectively preventing anyone from committing any illegal activities. Days before the signal goes live, bank robber Bricke (Édgar Ramírez) is approached by Kevin Cash (Michael Pitt), the son of a feared mobster, and his fiancé Shelby (Anna Brewster) who want his help in stealing a billion dollars just before the powers that be switch on the crime-preventing signal.

What should be a simple, straightforward heist movie is made far more complicated and less easy to watch by a two-and-a-half running time, which director Olivier Megaton (best known for the two underwhelming sequels to Taken) and writer Karl Gajdusek (who was previously a showrunner on the first season of Stranger Things) stretch out to highly unnecessary lengths. Scenes that should be trimmed way down are instead shown to us in their awkward whole, taking their sweet time getting to the point and boring us senselessly along the way with inept action and sex sequences so haphazardly edited together with a godawful soundtrack that you’re left breathless (and not in a good way) by the end of them. You could cut at least an hour of this film out and nothing would be amiss, like a pointless sub-plot with Sharlto Copley as a cop who we’re following around for no real reason, or the needless attempts to try and make some kind of commentary on the state of American politics and civil unrest (footage is shown to us of protestors clashing violently with police, something is understandably a sensitive topic for a lot of people right now).

Not that the film would have been good had it been significantly trimmed, because you’re still left with a story that never explores its intriguing premise as deeply as it should, and characters who are so bland and uninteresting you’re begging to be exposed to that numbing signal just so you can’t feel the pain of these extremely wooden performances. Of the main actors, only Michael Pitt leaves the closest thing resembling an impression, for his strange turn that feels like a combination of Jared Leto’s Joker from Suicide Squad and Tommy Wiseau; everyone else is just too blah to care about, or so deeply unpleasant that you wonder who would conjure up people like this from their imagination. There are a couple of over-the-top performances from some actors playing henchmen, which provided the only entertainment I got from this otherwise dreary movie to sit through. It’s also one of those plots that thinks it is saying a lot more about our current society than it actually is, even drenching itself in obvious symbolism from a destroyed American flag flying in the background of a quiet scene; however, the blatant commentary isn’t used to any constructive means because it is far too busy appearing to be contemplative about it rather than having fun with it. One of the reasons that the Purge films did so well was because they took a similarly ridiculous dystopian concept and ran with it, delivering B-movie thrills that made up for its obvious satire; the same cannot be said for The Last Days of American Crime, which takes itself way too seriously and spends more time with thin characters we don’t care about instead of exploring the concept it sets up (so basically, like the first Purge movie).

It’s bad enough that the movie lacks any sort of entertainment value, from poor direction to disinterested performances, but it’s the timing of its release that feels the most irksome. Obviously nobody could have predicted the waves and waves of worldwide protests supporting the Black Lives Matter movement (then again, this is 2020, a year where nothing is predictable), but for Netflix to go ahead and release this ultra-violent and police-sympathising action-thriller on their platform anyway, instead of maybe postponing it until the air has cleared somewhat, feels like a sore oversight on their part. It unintentionally makes the film feel even more tone-deaf, promoting violence and the odd bit of police brutality – you’ll wince as a cop grabs an assailant in a chokehold – during a point in time when thousands of people are peacefully protesting those things among others. For that reason, I suspect this film won’t do so well, but it’s not like that was the only thing that made this movie a complete and utter waste of space.

The Last Days of American Crime is a numbingly dull action-thriller which fails to explore its intriguing concept by focusing instead on a dumb plot filled with bland characters and wooden performances, although the timing of its release during the ongoing Black Lives Matter protests unintentionally makes this ultra-violent and police-sympathising movie feel just a little more misguided.