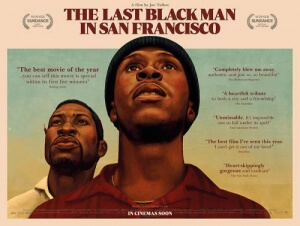 BASICALLY…: A young man (Fails) searches for a place to call home in a changing city that seems to have left him behind…

Joe Talbot’s directorial debut is a bit of an odd beast; mixing together the social anger of Spike Lee, the soothing visual poetry of Barry Jenkins, and the eccentric style of Wes Anderson, The Last Black Man in San Francisco might be a little too peculiar for the tastes of some people. However, it is also a movie with a lot of soul, wistfully humming a melody of friendship, cultural identity, and how, as Bob Dylan once put it, the times are a-changin’ – but with a striking focus on the people who are threatened with being left behind.

Talbot also co-wrote the screenplay with his childhood friend Jimmie Fails, who also plays our lead figure in the movie. Jimmie – also his name in the movie – and his best friend Mont (Jonathan Majors) are friends living in the titular city, which is rapidly undergoing construction to keep with the ever-changing world, one which doesn’t seem to have much room left for Jimmie, Mont, and many of the other black residents. Jimmie, however, has his mind focused more on acquiring a large house in the city, one which he declares was built by his grandfather in the 1940s, and when the current residents are forced to move out, the two friends use the opportunity to finally – albeit unofficially – claim the house their own. So begins a gentle, subtle, and even quirky mini-odyssey for both Jimmie and Mont, who both must come to terms with the fact that the world they constantly have optimism about might not be as easy as it seems on paper.

It’s an interesting movie to let digest as you watch it, because there’s a lot going on underneath the surface of this story that a solitary viewing might not even be enough to fully grasp the weight of it all. It’s both an ode to a city full of culture and spirit, and also a middle-finger to the cynical, greedy and predominantly white hipsters who are effectively sucking out its energy and replacing it with something hollow and fake. However, if Talbot is indeed sending angry vibes about the gentrification process, then he’s being very calm about it; the movie never gets too real about some of the harsh realities these characters have to face, but it doesn’t overlook them either. It’s just enough to leave you thinking about the overarching themes without whacking you over the back of your head with them, and without distracting from the central bond that the two lead characters share with each other. Seeing both Fails and Majors act together as people who have been in each other’s company for so long that they clearly are comfortable being in their own space with one another is genuinely sweet, and by pushing their dramatic arc over anything else the film retains a sense of focus which helps it to stay on track all the way up to its conclusion.

Watching the movie play out with the smooth pace that it has, as well as the somewhat eccentric style within its framing, lighting, staging etc, is at times like listening to a gentle record, containing tunes that whistle sweet nothings about the city’s culture, stunning architecture (or at least, what’s left of it that’s authentic), and the real desire within people to make a nest and build a legacy that’ll mean something long after they’re gone. However, the film balances the carefree attitude with passionate cries that at the very least make us aware of how everything isn’t quite as rosy, with violence, poverty and greed still very much dominating the worlds and lives that the two lead characters cannot seem to entirely escape from. It’s a movie that’s desperately wanting to be heard, but ensures that those who end up listening are gently guided through the storytelling before getting to the more major themes it seeks to tackle, which might not be for everyone but for those who stick with it will be pleasantly glad that they did.

In short, it’s a good movie. I know you’d prefer I get more into the themes and technical aspects, but honestly I can’t think of much else to say about it other than it’s good, for the reasons I (hopefully) got across in the past couple of paragraphs. Certainly give it a try if it’s showing near you, but that’s about all I have to say about The Last Black Man in San Francisco; apologies if it makes this review seem a little anti-climactic, but there’s really nothing more I can say that wouldn’t just be me repeating myself.

The Last Black Man in San Francisco is a gentle story of gentrification and cultural identity that’s smoothly told by debut director Joe Talbot, with an eccentric style as well as an underlying anger that doesn’t get in the way of its gorgeous visual poetry.

Want to decide what the movie’s like for yourself?
Check out The Last Black Man in San Francisco showtimes in London
via