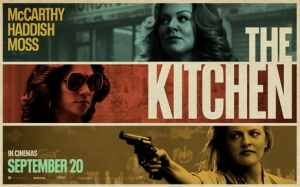 BASICALLY…: Three mob wives (McCarthy, Haddish and Moss) step up to take over their husbands’ business when they are sent to prison…

Though it’s not really a comedy, the latest Melissa McCarthy vehicle The Kitchen is absolutely hilarious, in the sense that somebody thought that a movie this wastefully bad could be released in cinemas to potentially find an audience.

The directorial debut of Oscar-nominated screenwriter Andrea Berloff has all the hallmarks of a first-time director who’s wildly out of their comfort zone, from inconsistent pacing to an insufferably over-simplified characters and dialogue, but the biggest crime she commits is wasting both a solid cast and an even more solid premise on a movie that takes advantage of neither. With the amount of talent involved in this, The Kitchen seriously could have been great, but instead it’s one of the year’s biggest disappointments, and might even be one of the year’s worst.

Set in Hell’s Kitchen in the late 1970s, Kathy (McCarthy), Ruby (Tiffany Haddish) and Claire (Elisabeth Moss) are mob wives who are neglected by the Irish mob when their husbands are sent to jail. They decide to take matters into their own hands, by continuing their husbands’ racketeering business and dealing with rivals in the traditional gangster way (i.e. kill them).

It’s a premise that’s simple, but intriguing. Yet, the way that Berloff handles it is wildly inconsistent; scenes have virtually no connectivity, characters will suddenly show up with barely any introduction – Domhnall Gleeson’s war veteran, who ends up helping the women as an enforcer, arrives completely out of the blue – and important plot points are brought up but never expanded on. You go through most of the movie knowing next to nothing about these women’s backstories other than what is hastily explained to us through awkward expository dialogue, and what few moments of intrigue there are will immediately be tossed aside for the 1000th scene of our three leads walking together down the New York sidewalk. None of them have any defining personality, but the movie wants you to think that you do because it will constantly blare 70s-era hits on the soundtrack in scenes that aren’t even meant to be accompanied by music; the movie can play as many tracks by The Rolling Stones, Fleetwood Mac and Kansas as it wants, but it won’t ever be enough to mask the movie’s glaring hollowness.

Berloff strands her three female leads, who are collectively very talented and deserve much better material than this, with dialogue that is entirely made up of lines cynically designed to promote female empowerment. Of course, there is nothing inherently wrong with the message, but when it’s the only thing that characters will ever talk about instead of having actual conversations with each other, it feels extremely disingenuous after a short while. By the time they drop an empowering one-liner or stand up to a (mostly male) authority figure in their lives for the hundredth time, the message has been drilled in to our heads so much that it’s left an irreparable hole in the middle of it, and it becomes painfully obvious that neither Berloff nor the characters she has created have anything to contribute towards female empowerment other than just mentioning it all the time. This script clearly needed a few more polishes before going in front of a camera, or at the very least a co-writer (Berloff is the only credited writer, said to the surprise of no-one) who could steer this inane dialogue towards something with meaning, instead of empty political statements.

This movie is technically part of the DC Universe, as it’s based on the DC Vertigo comic-book miniseries of the same name (though there’s no actual connection to films like Man of Steel, Wonder Woman or Aquaman), and as such I’ve heard some reviewers say that this also makes The Kitchen one of the worst comic-book movies ever made. While I wouldn’t exactly go that far –the likes of Catwoman, Batman and Robin and Suicide Squad still exist (all DC, coincidentally) – this is definitely among the weakest of its kind in recent years, based on how much it squanders its potential for something that’s a bigger mess than anything you’d find in an actual kitchen. There’s no development for this story or these characters, entire plot threads will swiftly be cast aside for yet another weightless “girl power” one-liner, and most of the actors look entirely confused as to what they are actually doing. Again, you don’t just have cast members like Melissa McCarthy, Tiffany Haddish and Elisabeth Moss on your side, but others like Domhnall Gleeson, Margo Martindale, Brian d’Arcy James, Bill Camp, James Badge Dale and even Common working from your script, yet they are all entirely let down by material that gives them nothing to work with, and it shows in largely aimless performances that you can tell were directed by someone with very little experience behind the camera.

Despite all the ingredients being right in front of it, from a stellar cast to an intriguing plot to a sweet 70s soundtrack, The Kitchen still manages to fumble the mixture, overcooking it until it’s burnt to an unrecognisable state, and leaving everything in a complete tip for other people to sadly clean up afterwards.

The Kitchen is one of the year’s biggest disappointments, squandering all of its potential with a messy, inept collection of weightless statements about female empowerment instead of actually being a functioning movie, leaving the talented cast stranded with little material to work with, and taking the intriguing premise absolutely nowhere. It is also, on a technical and substantial level, one of the year’s worst movies.

Want to decide what the movie’s like for yourself?
Check out The Kitchen showtimes in London
via