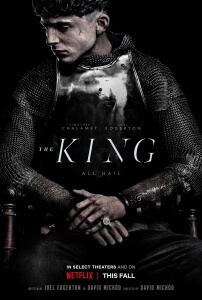 BASICALLY…: Young prince Hal (Chalamet) is crowned King Henry V after his father (Mendelsohn) dies, and must find a way through the wars and chaos he has inherited…

They’ve been adapted a number of times for film and television, yet Shakespeare’s Henriad series of plays – among them Henry IV Parts 1 and 2, and Henry V – are still pretty vague next to the Bard’s many other works. Despite it often being considered his greatest historical epic by scholars and critics alike, the Henriad series hasn’t resonated with audiences as much as the likes of Hamlet and Romeo and Juliet have, possibly because out of all his plays they are the ones that feel most like a history lesson instead of true entertainment (though not without their moments of genuine theatricality).

In adapting both Henry IV plays and Henry V, director David Michôd tries to steer as far away from the traditional Shakespearian dialogue as he can to make his film The King a proper historical epic meant for the big screen (or at least, the biggest screen in your home that can play Netflix), but while it’s certainly ambitious and well-made it is not exactly a thrilling experience.

Set in the early 15th century, King Henry IV (Ben Mendelsohn) is not long for this world, a fact that his eldest son Hal (Timothée Chalamet) could not care less about. Hal is disgusted by his father’s reckless nature that has resulted in several wars, and would rather spend his days drinking and clowning about with his companion, Sir John Falstaff (Joel Edgerton). However, when circumstances change after Henry IV eventually passes, Hal is suddenly crowned King Henry V and is thrust into a position where he must right the wrongs his father left – but that is a difficult task in and of itself, especially when Louis the Dauphin (Robert Pattinson) repeatedly insults and threatens his life, causing England to declare war with France.

Though not a straight adaptation of Shakespeare’s plays, The King still has traces of the Bard’s voice in dialogue written by both David Michôd and Joel Edgerton which at times feels theatrical and even epic. However, it is largely focused on being a historical epic in its own right, something that feels like it was made to fill the void left by Game of Thrones, and at times the cinematography, acting styles and especially the big battle sequences look like something straight out of the hit TV show. It is stunning to look at, in that bleak and conniving kind of way, but it doesn’t always convince on a more thematic and emotional level; many of the characters aren’t entirely well-defined, quickly disregarded despite the efforts of a cast that is largely underutilised, and the plot plods in between the big battles, eventually concluding on a somewhat anti-climactic note when there’s so much more story to tell. It never feels truly epic, despite the décor and vast landscapes suggesting otherwise; instead, it can be tedious and a little dull.

Michôd is certainly trying to give his movie as grand a look as it possibly can, and he does get some strong performances out of most of his cast; Edgerton is a standout as Falstaff, while Robert Pattinson also stands out for the wrong reasons, with an over-the-top performance that has him sporting a ridiculously foppish hairstyle and even more ridiculous French accent that’s far more silly than it is intimidating. As for Chalamet, he does fine; despite the occasional slip in his English accent, he does have moments of genuine ferocity and calm calculation which makes me so glad he’s becoming popular for turns in films like this and Call Me By Your Name instead of trashy YA tripe. However, the character of Henry V himself isn’t all that interesting; he’s mainly one-note with the same dour expression throughout most of it, which isn’t really the fault of the actor himself but rather the nature of the writing and direction, which doesn’t help to make him a much more compelling lead than he ought to be.

The film takes itself way too seriously, which in a way is kind of the point because it is depicting history (albeit a somewhat dramatized version of history) in such a matter-of-fact way, but it certainly could have used a slight liveliness to help make it at least entertaining to look at. Instead, it’s a largely dry version of the story, with characters speaking and acting in such a po-faced manner that you think the entire cast took a whole bottle of Ritalin before each take; perhaps that’s why Pattinson seems so over-the-top by comparison, because he’s the only actor in the entire movie to have some semblance of fun in acting so crazy, ironically channelling Michael Sheen’s now-legendary hammy performance in the Twilight movies. Even though it’s a ridiculous performance that’s wildly out of place and unintentionally funny, at least he realises that someone needs to inject some crazy life into this otherwise dour and self-serious stab at history.

Though it’s not especially great, it isn’t a complete failure, either; in fact, it’s a little too dull to recommend in either circumstance. Fans of Chalamet will probably get their fix of the actor trying his best despite the flat material he’s been given, but for anyone wanting the definitive big-screen version of Shakespeare’s Henriad plays, they’d be better off heading once more unto the breach to find it.

The King is a largely flat and dull retelling of Shakespeare’s Henriad series of plays, despite strong visuals and a cast that is certainly trying to inject life into their otherwise uninteresting characters, but are let down by a script that doesn’t give them a whole lot to work with, nor does it ever feel as truly epic as it perhaps desires to be.

Want to decide what the movie’s like for yourself?
Check out The King showtimes in London
via