The King of Staten Island (Review)

The King of Staten Island (Review) 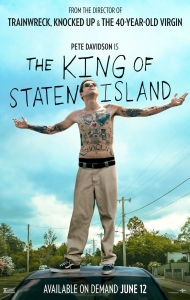 BASICALLY…: Young slacker Scott (Davidson) is forced to finally grow up when his mother (Tomei) starts dating a fireman (Burr)…

You know at least two things about a Judd Apatow comedy before watching it: one, it’s probably going to be just over two hours long; and two, there’s going to be a lot of surprisingly mature topics being handled at the same time as it’s making you laugh. Whether it’s pondering the very meaning of existence in Funny People, handling commitment issues in Trainwreck and The 40-Year-Old Virgin, or just examining married life when you hit the big 4-0 in This Is 40, Apatow has a way of making people laugh while also giving them a little something extra for the brain to mull over.

He hits the mark once more with The King of Staten Island, a starring and co-writing vehicle for Saturday Night Live breakout Pete Davidson that excels as a launching pad for the young comedian, and as a reflective meditation on the art of growing up when you’re already grown up.

For Scott Carlin (Davidson), his life is one giant case of arrested development: at 24, he’s still living with his mother Margie (Marisa Tomei) and spends his days getting high with friends, practising his tattoo artwork, and occasionally hooking up with his best friend Kelsey (Bel Powley). A much-needed jolt of perspective finally strikes when Margie starts dating loudmouth firefighter Ray (Bill Burr), something that Scott – whose father was also a firefighter that died on the job when Scott was seven – is not too keen on, but it leads him to finally start figuring out what it is he wants to do with his life.

Davidson, as a writer in addition to playing the lead, takes heavy inspiration from his own life, including the fact that his own father was also a firefighter who perished on duty during 9/11, something that he clearly isn’t afraid to tackle comedically having also referenced it during some of his SNL skits. However, The King of Staten Island paints the sometimes controversial comedian in a different light, in particular how he – or rather his on-screen avatar Scott – tends to deal with this pretty traumatic event from his childhood; he mostly lays around smoking weed, having sex, and having pipe dreams about opening a restaurant that’s also a tattoo parlour, most of which are scoffed at by the numerous people in his life trying to tell him to get his life together, but he really doesn’t care because, in his mind, it’s all a coping mechanism and it’s worked well for him so far. But even though he is a pure-grade loser with zero direction in his life, Scott still comes off as a sympathetic character because you actually do identify with his coming-of-age story, and also because Davidson gives a very strong performance that’s both funny and charming in equal measures, making you want to root for him even when he’s doing very dumb things like attempting to give a nine-year-old his first tattoo.

It’s a richly layered script, filled with poignant themes and very human characters, and paced just well enough so that you get a feel for every single one of them (even though it does start to lose a little bit of steam towards the end). Instead of making the new potential step-father figure a cartoonish bully or something, the film really spends a lot of time with him to show you he’s really not all that bad, especially around people he clearly wants to form a relationship with; Bill Burr is so good in this role that you feel his frustration as Scott keeps stonewalling him with every chance he gets, and he has great chemistry with Marisa Tomei – also outstanding in this film – that you get why they would want to end up together. What’s really commendable about this film is its ability to study the situation and the people involved with it, and having us laugh along with some of the developments on both sides. As an example, there is a spot of criminal activity later on in the movie and it’s hilariously played out because it’s constantly subverting your expectations in addition to being pretty dark (figuratively and literally) and suspenseful at the same time. It works because not only are the performances well-tuned and perfectly timed, but the writing is strong enough for you to recognise the foolish nature of it all while also not being afraid to address the serious consequences of it all.

It comes back to Apatow’s assured direction which, like a lot of his other movies, gets the point across just enough without feeling like it’s too over-indulgent. He’s a strong comedic director, but he should also be recognised for handling drama well too; he lets the right scenes play out for however long they need, and gives his characters enough space to breathe and actually act like human beings instead of what they are designated as on the page. Over the years, we’ve seen him handle sex comedies, romantic-comedies, contemplative comedy-dramas, and This Is 40, but this feels like the first time we’ve seen Apatow really let his mature side take over and deliver a character study that’s just as dramatic and emotional as the next one.

It’s too early to say if it’s his best film to date, but it is definitely up there among the ones of his I’ve liked the most, because not only is it funny and well-acted, but it feels like a very personal movie that anyone in similar circumstances can relate to and identify with. I found it to be a very moving film because of that, and I recommend it to anyone also caught up in their own case of arrested development.

The King of Staten Island is perhaps Judd Apatow’s most mature film to date, tackling some hard-hitting themes and topics from a script co-written by star Pete Davidson, who in turn delivers a funny and charming performance that’ll have you rooting for a total loser.

Want to decide what the movie’s like for yourself?
Check out The King of Staten Island
via