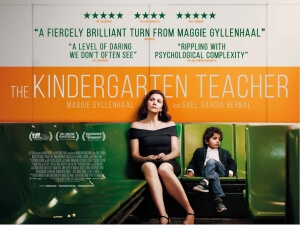 BASICALLY…: A lonely kindergarten teacher (Gyllenhaal) takes a shining to one of her young students (Sevak) who proves to be exceptionally bright…

For a number of years now, Maggie Gyllenhaal has largely kept a somewhat low profile in movies, alternating between standout performances in indie fare like Secretary, Sherrybaby and Frank, and larger profile flicks such as The Dark Knight, Crazy Heart and even Nanny McPhee Returns – she seems to be using her talents sparingly, perhaps so that when she really knocks one out of the park, like she does in The Kindergarten Teacher, it will come as a much greater surprise that reminds us even more of her understated versatility.

A passion project for Gyllenhaal, who not only stars but also produces the film with Sara Colangelo both writing and directing, the film is an American remake of the 2014 Israeli film of the same name, but this is one reimagining that doesn’t soften any blows nor does it sugar-coat any of the powerful, and highly questionable, actions of its characters that I assume the original also did to harrowing effect. Either way, you are not ready for the quietly harrowing performance that lies within this articulate and fascinating little movie.

In the film, Gyllenhaal plays Lisa Spinelli, a Staten Island kindergarten teacher who feels noticeably dissatisfied with her life; her relationship with her husband (Michael Chernus) is loving but uneventful, she expresses disappointment that her kids are more interested in joining the Marines or playing on their phones than engaging in more creative activities, and she doesn’t inspire many people at her poetry classes, taught by Gael García Bernal’s Simon. One day, she notices that one of her young students – a shy and disconnected boy named Jimmy (Parker Sevak) – is reciting his own poetry seemingly off the top of his head, and when Lisa jots it down and passes it off as her own work in the class, everyone is captivated by its breathtaking lyricism; but none more so than Lisa herself, who decides that Jimmy is a prodigy that needs to have his talents nurtured, and so begins to give a lot more attention to him than is required for a teacher. Soon, though, Lisa begins to walk a fine line between fascination and obsession, and if you’re getting a couple of uneasy vibes just from reading this plot description then I assure you that the feeling is mutual.

When you really break it down, this movie does have a disturbingly predatory vibe to it, and every time that Lisa engages herself with this five-year-old boy, whether in class or outside of it – she gives him her personal phone number at one point, and tells her to call whenever he feels like there’s a poem brewing inside his mind – there are so many red flags going off at once that it’s hard to focus. Seriously, this relationship becomes so creepy that you’re half-expecting the music to suddenly become sinister and menacing, because one quick rewrite could turn this into a thriller or even a psychological horror film; that’s how uncomfortable you are made to feel while you’re watching this adult woman become way too close with this young boy who doesn’t seem to understand much about how the world works. Thankfully, the uncomfortable nature of this story is entirely intentional, otherwise I probably wouldn’t be saying such nice things about it; it’s much more of a story about this woman having a very unusual crisis of conscience, who’s driven to obsession with the gifts of her young student because her own life has produced some extremely lacklustre results and somehow wants to find meaning in her life, even if it’s to nurture the gifts of someone not old enough to even understand them yet. Gyllenhaal’s performance is so good here, because you can absolutely see the disappointment and underlying bitterness in every stretch of this character’s face, and you get the impression that her slow descent into inappropriate behaviour is a direct result of her denial from the universe for a life that’s better than what she had expected for herself. It’s a fascinating character study, led by an excellent performance from a phenomenal actress, but at the same time I completely understand if people are extremely put off by its predatory overtones; I certainly was, and that’s coming from someone who liked the movie.

Though it’s easy to single out the problematic actions that its lead character undertakes throughout the film, The Kindergarten Teacher deserves a lot more than just being labelled as “that Maggie Gyllenhaal movie where she obsesses over a young boy” (I realise how that sounds, but trust me when I say it’s much more than that). It’s a smoothly paced movie, sometimes a little slow but it keeps your attention if only because Gyllenhaal nails every single scene she’s in, and writer-director Sara Colangelo does her best to stray as far away from clichés as she can when it comes to child prodigy movies, including the very amusing notion that, for all of his precocious wisdom and apparent gift for poetry, this young boy really acts like he doesn’t give a rat’s arse about any of it, and much like any other kid just wants to go back to naptime or whatever activity is going on in the classroom.

Sure, your main takeaway from the film may be its rather disturbing vibes from the main character, especially when she ends up doing something pretty extreme in the film’s third act, but it’s not as though that’s all that the film is; it is also a captivating, smart and extremely well-acted character study that dives into some pretty deep themes of loneliness and disappointment that only an actress like Maggie Gyllenhaal could pull off near flawlessly.

The Kindergarten Teacher features an outstanding lead performance by Maggie Gyllenhaal in a film that doesn’t shy away from her character’s disturbingly predatory vibes, but it is smartly written and directed to where you find yourself interested in this character even when she’s doing things that aren’t exactly appropriate.