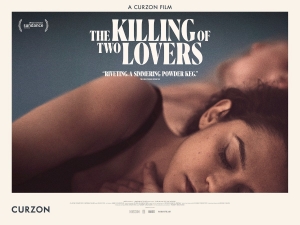 BASICALLY…: A man (Crawford) finds it difficult to cope during a separation from his wife (Moafi)…

The very first scene of writer-director Robert Machoian’s The Killing of Two Lovers heavily implies that the title is about to become very literal. In it, David (Clayne Crawford) is standing over the sleeping bodies of his wife Nikki (Sepideh Moafi) and her male lover, about to point a gun in their direction. Except, the trigger is never pulled; he escapes through the window and runs back to his own house as the title is stamped across the screen, and as horror music plays constantly on the soundtrack.

It’s at this point where the viewer can perhaps deduce that the title might not actually be as straightforward as it seems, and as we get a bit more information about David and his current relationship with Nikki, the clearer it becomes that The Killing of Two Lovers refers to something a bit more metaphorical and thematically complex. It’s all part of a tingly little thriller which always leaves you on edge as to what the overall outcome is going to be, complete with some very well-done filmmaking that further sets a path of discomfort for itself.

As it transpires, David and Nikki are in the midst of a trial separation; the decision was clearly amicable, since the two former high school sweethearts still seem to have a capable relationship, and David is still able to regularly see their kids, moody teen Jess (Avery Pizzuto) and their three younger boys (all played by director Machoian’s actual sons). David has also moved back in with his elderly father during this time, while Nikki and the kids have remained in the family home, all under the pretence that this split is temporary until he and his wife figure things out; however, when he discovers that Nikki has taken advantage of the brief split to hook up with another man by the name of Derek (Chris Coy) – despite that having been agreed between the married couple that this could be done during this time – it starts to unleash a lot of pent-up anger in David, which starts to cloud a lot of his judgement and leads to psychologically questionable acts such as, well, showing up in their bedroom with a gun in hand.

Clearly, though, The Killing of Two Lovers refers far more to the deteriorating relationship between David and Nikki, since they are both drifting further and further apart without either of them fully realising it. David is obviously taking it much harder than Nikki is, but even she seems to be in some kind of denial that there is still a future for her and her husband, despite the two of them blatantly trying to make things work given the circumstances. Airtight close-up shots of their faces highlight a deep melancholia behind their mundane catch-ups, particularly during a disastrous attempt at a date night where they don’t even make it away from the family home, due to her paranoia about leaving teenager Jess alone with her three younger brothers. You can certainly feel the claustrophobia striking out in their scenes together, which is made more painful because you can tell that there was once a spark between these two that has since been extinguished, and in terms of moving the story forward it serves as a painful look at these characters’ desperate attempts to try and stay together despite how it really needs to be.

The uncomfortableness is further amplified by some effective low-key filmmaking by Robert Machoian (who is also credited as editor). Framed entirely within a 4:3 aspect ratio, Machoian and his cinematographer Oscar Ignacio Jiménez opt for wide and atmospheric extended shots of this small backwater Utah town, with characters often making up a small percentage of the actual screen while the wintery backgrounds and moody, overcast skies dominate the vast majority of the frame. The score, too, is comprised of tightly-wound sound effects that are designed to constantly leave you about as on the edge of sanity as David clearly is, to a point where you could legitimately fear something bad is about to happen in virtually every scene. Jiménez’s cinematography also captures some rather stunning shots at any time of day, including one stand-out sequence where we see teen Jess – who is really having a bad reaction to their parents’ separation compared to her younger brothers – have an argument with her mother’s would-be lover Derek on her front doorstep, and it is all shot from the perspective of a nearby car with the dialogue itself realistically muffled from the amount of distance away. This is a very tightly shot and made movie, through which Machoian shows great promise as a visual director as well as one of mood and atmosphere.

The filmmaking is strong, the acting is top-notch, and there are many sequences that just leave you completely shaken by the brutality of certain characters and the emotional complexity of certain situations. The ending, admittedly, does leave some things a bit too vague and unresolved, but perhaps the point of The Killing of Two Lovers is to show how love, even at its most fractured, can be so ambiguous that it’s worth all the craziness (though, perhaps, don’t sneak into your ex’s house with a gun).

The Killing of Two Lovers is a taut low-key thriller about a disintegrating marriage where the uncomfortableness is amplified by a focused script, top-notch performances, and strong visual filmmaking.

The Killing of Two Lovers is now showing in cinemas nationwide, and is also available to rent on Curzon Home Cinema.