The Kid Who Would Be King (Review)

The Kid Who Would Be King (Review) 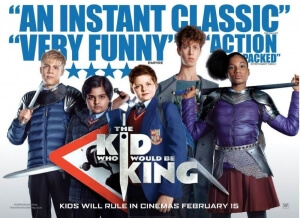 BASICALLY…: Young Alex (Serkis) comes across the mythical sword Excalibur, and learns that he must assemble a new round table of knights to defeat the evil forces of Morgana (Ferguson)…

It’s taken the better part of a decade for Joe Cornish to follow up his first feature, the 2011 cult sci-fi horror comedy Attack The Block, and after years of staying fairly dormant as a filmmaker during this period – outside of a couple of writing credits here and there, he’s mostly been considered for several other projects from Star Trek Beyond to Kong: Skull Island only to turn them down – he’s finally shown us that he’s no one-hit wonder, with a family adventure film that’s fun and entertaining, but at the same time isn’t without a few fundamental flaws that prevent it from being as great as his previous movie.

The Kid Who Would Be King, an original concept by writer-director Cornish, is the story of Alex (Louis Ashbourne Serkis), a young boy who one day discovers the fabled sword of Excalibur wedged within an abandoned construction site, and upon pulling it out of the concrete pillar he finds it in, he learns from ancient wizard Merlin (Patrick Stewart) – who has disguised himself as a lanky sixteen-year-old boy (Angus Imrie) – that he is destined to form a new Round Table in order to prevent the evil sorceress Morgana (Rebecca Ferguson) from returning and enslaving the whole of Britain. With Merlin’s guidance, Alex recruits his best friend Bedders (Dean Chaumoo) as well as bullies Lance (Tom Taylor) and Kaye (Rhianna Doris) on a quest to stop Morgana from taking over, whilst learning what it is to be a true knight along the way.

Cornish has gone for a more family-friendly tone with this film, whereas Attack The Block was far more adult and grimy, and it works fairly well for this, especially considering that this features a slightly younger cast and its themes of medieval magic and sorcery are things that younger children would probably enjoy more than an older audience. Cornish adds a fair amount of playful action to the mix which isn’t too adult for children and isn’t too childish for adults; it’s a strong middle ground that anyone of any age can enjoy, in the same way that anyone can watch The Goonies or Who Framed Roger Rabbit (even though this movie is nowhere near as good as any of those) and get along with them just fine, without ever feeling like it’s completely favouring one demographic over another. The action scenes are entertaining, exciting and even suspenseful, and the movie does a very good job with giving them a sense of scope that you seldom see in most other family adventure movies nowadays. It’s also a movie that treats its audience with respect, and isn’t afraid to touch upon certain heavier themes involving the main character’s absent father, or the dark threat that the villain poses which is at the very least bound to frighten some of the younger audience members.

Luckily, the movie has a keen touch of lightness with comedy that more often than not lands, and a lot of that comes from the film’s MVP Angus Imrie as the younger version of Merlin; his performance is not only hilarious with his line delivery and timing perfectly on point, but it’s also extremely physical with the several amount of spells he ends up casting, which must have taken so much time for the young actor to practise that to see him perform it with such passion and dedication is rather awe-inspiring. Patrick Stewart isn’t on-screen for very long whenever Merlin transforms into his older Arthurian self, but he does well in the few moments he’s actually around; for the most part, though, Imrie is easily the best part of this movie and certainly the funniest. I could honestly just watch a whole movie of young Merlin wandering about modern-day Britain pretending to be a sixteen-year-old kid and casting all these spells, and never once would I get bored of it because this guy is so funny and entertaining.

Imrie is so good here, that it really points out further how a major chink in The Kid Who Would Be King’s armour is said titular kid; Louis Ashbourne Serkis is probably a very decent young man, that I have no doubt – and I’m sure that being the son of Andy Serkis certainly helps as well – and I hate to say it, but he’s not very good in this. Beyond just the simple fact that Alex is a pretty bland lead character with not a lot of interesting things about him, aside from all the stuff that is revealed about his father, young Serkis’s performance is very one-note throughout the majority of it, with most of his lines being delivered with the same monotonous tone that barely ever sees him raise an octave. His performance is so wooden that it honestly ends up being very distracting; you never truly buy that this kid is the one that’s meant to adopt the King Arthur role in this quest because he doesn’t have much of a screen presence, nor does he feel like an actual leader other than just saying stock hero lines every now and then. Again, I feel bad because I’m sure this kid is a perfectly charming young guy in real life, and he comes from a family I admire very much, but I’m sorry, he just did not do anything for me here. The same can also be said about the villain, with Rebecca Ferguson’s Morgana being just as one-note and dull as the hero; she’s basically just the Enchantress from Suicide Squad, only not as entirely useless.

Flaws aside, notably the lead performance as well as the fact that it’s probably a little too long – the whole third act of this movie comes after what naturally felt like the climax, which throws you off for a moment – this is still a perfectly enjoyable family film which shows that Cornish isn’t just a one-off, even though he hasn’t made something that’s better than Attack the Block.

The Kid Who Would Be King is a very enjoyable family adventure from writer-director Joe Cornish, but although the film benefits from fun action and light relief from a scene-stealing Angus Imrie, the film greatly suffers from a wooden lead performance by Louis Ashbourne Serkis, who is also stuck with a particularly uninteresting lead character to play.