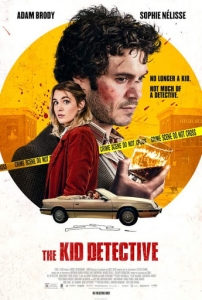 BASICALLY…: Abe (Brody) is a renowned former child detective who receives his first adult case when a teen (Nélisse) asks him to investigate her boyfriend’s murder…

Ever wondered what would happen if classic child detectives like Nancy Drew, the Hardy Boys or Harriet the Spy stopped being, well, children? That’s the core concept of Evan Morgan’s feature directorial debut (he previously co-wrote the screenplay for the underrated school bully revenge thriller The Dirties), but it is nowhere near as cutesy or as charming as you probably think it would be (and I mean that in a good-ish way).

The Kid Detective, Morgan’s dry but amusing dark comedy, follows Abe Applebaum (Adam Brody), an aimless 30-something who was once a celebrated child detective, solving juvenile cases from missing fundraiser money to lost cats, like you would normally find in a Nancy Drew or Hardy Boys novel. In the present, though, he’s kind of a loser; although his detective agency is still up and running, he’s mostly taking child-friendly cases that are incredibly easy to solve, and when he’s not out getting into drunk barfights with past acquaintances (who are still angry about being revealed by Abe as past culprits), he’s lounging around in his apartment, much to the frustration of his parents (Wendy Crawson and Jonathan Whittaker). One day, however, he gets a new client: teenager Caroline (Sophie Nélisse), who wants Abe to investigate her boyfriend’s murder. Intrigued to receive his first murder case, Abe begins compiling information that could also explain a number of things, from mysterious flower origamis being sent to Caroline, to the sudden disappearance of Abe’s former secretary when they were still kids.

It’s a concept that could very easily have been played up more for outrageous laughs, like a raunchy Seth Rogen comedy, but the interesting thing about Morgan’s film is how seriously it appears to take itself. It definitely has comedic elements, much of it delivered in a very dry manner, but by and large it’s a film that clearly desires to be seen as a straightforward film noir, albeit with the colour scheme and cinematography of a child detective movie or television series you’d find on Nickelodeon or the Disney Channel. While it is an amusing angle, there seems to have been some restraint on how far Morgan has decided to take the overall idea, since it lacks the full-on commitment to both its juvenile roots and the adult-centric comedy that makes the concept a bit more fluid and digestible. The writer and director does has some fun while deconstructing some familiar child detective tropes (breaking into a house and hiding in the closet triggers significantly more alarms when you’re an adult, as we humorously learn in one sequence), but it doesn’t seem to fully take hold of all the possibilities he could potentially explore.

That said, when the film does decide to go the extra mile, safe to say it’s unexpected. Without going into too much detail, you wouldn’t expect to go into a film called The Kid Detective, and come out drawing parallels to Chinatown and Room in your head. There is some grim, disturbing stuff that’s uncovered in this film, and it’s extra seedy when you know who’s involved and why; while never shown (thank goodness), the sheer depth of detail they go into whilst describing it is rather unnerving, and almost makes the slow, dry build-up to this reveal worth it. However, part of me still feels that the movie could have used a bit more time to figure out how they could take this concept even further than that massive bombshell; if you want to make a pitch-black child detective movie for adult audiences, then go all out with it, whether that means including even more outrageous stuff than what we get.

What we do get, though, is decent enough, though nothing spectacular. Morgan’s script can be lightly funny when it wants to be, the acting is solid (Adam Brody is very good here, as is Sophie Nélisse), and while its concept perhaps isn’t as explored in depth as it could have been, it makes for an interesting watch that’s worth it alone for the shocking conclusion that’ll leave you really unnerved. I can see it maybe gaining a small audience over time, because there is certainly a crowd for this type of dry, dark comedy, but while there’s things to admire there’s also not much reason to see it rather than out of curiosity.

The Kid Detective is a dry but mildly amusing dark comedy that gets some enjoyment out of its satirical jab at child sleuth movie tropes, but the intriguing concept isn’t perhaps explored as deeply as it probably could have been.

The Kid Detective is out now in cinemas across the UK.