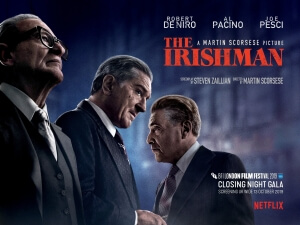 This review is of the cut shown at the BFI London Film Festival in October 2019 – it is currently scheduled to debut on Netflix on November 27th 2019.

A fair warning to those with a short-attention span; Martin Scorsese’s The Irishman is a very long movie. With a running time of three-and-a-half hours – with no intermission – you’ll be in constant danger of having your concentration wander, focusing more on how badly you need to stand up and stretch more than you will the movie itself.

You really shouldn’t be doing that for a couple of very good reasons: one, it’s bad manners to suddenly stand up in the middle of an auditorium (or in your living room surrounded by others) and block the view of others simply because you needed to stretch your limbs; and two, The Irishman is an excellent movie which sees Scorsese return to the genre he helped to define, but in a far more nuanced and meditative manner that demands your full attention and appreciation – even if it means staring at a screen for twice the length of a standard movie.

Based on Charles Brandt’s crime nonfiction book I Heard You Paint Houses – itself a euphemism for killing someone – the film follows the life and times of Frank Sheeran (Robert De Niro, in his ninth collaboration with Scorsese, and their first since Casino more than two decades ago), a mobster hitman nicknamed “The Irishman” due to his Irish Catholic background. We see him as early as the Second World War – still played by De Niro, thanks to some cutting-edge de-aging technology that allows him and several other actors to appear younger without the use of make-up – and all the way through to his stay in a retirement home during the early 2000s; in between, we see how he becomes involved with Russell Bufalino (Joe Pesci, who returns to acting after a nearly twenty-year retirement for his old pal Scorsese), the head of the powerful Bufalino crime family, and eventually with labour union boss Jimmy Hoffa (Al Pacino, who until now has shockingly never featured in a Scorsese film), the latter of whom he would become most synonymous with, especially in his alleged involvement in Hoffa’s sudden disappearance in 1975.

Less of a biopic and more of a study of the grim business of mobster activity, Scorsese’s film is a true epic in every sense of the word. Spanning several decades, containing rich human drama, and of course that very extended running time in which it is shown in all its glory, The Irishman is fantastically realised by the legendary director, who tells the story with such rich detail that every single scene pops with life, even when it seems that not all that much is even happening on-screen. At times, you don’t even notice how long it is, because there is such a fascinating world being shown on the screen for you, filled with interesting and larger-than-life characters that more than hold your interest, who are all brought to life by some truly impressive performances. It’s great to see not just Robert De Niro back in Scorsese’s realm, and give one of his best performances in years while doing so, but also Joe Pesci who is so quietly menacing in a role that feels tailor-made for the retired actor, and is one that he fits perfectly. As for Al Pacino – who, again, shocks you with the fact that it’s taken him this long to partner up with Scorsese in any capacity – he is outstanding as Jimmy Hoffa, brilliantly capturing the man’s brash ego and putting his typical OTT acting style to good use in a shouty and enjoyably cartoonish performance that never becomes caricature. The three leads do some awesome work here, and it’s their powerful and intimidating turns that serve as the bare minimum for a movie that requires a good chunk of your attention.

It also feels like a very different kind of crime drama from Scorsese; whereas movies like Mean Streets, The Departed and especially Goodfellas are ones where you could argue the violent lifestyle of gangsters are glorified in a certain sense, The Irishman is an instance where Scorsese deliberately foregoes the fetishizing of the criminal underworld and instead portrays it for what it is, in this case being a cold-hearted, ruthless and even brutal business. It’s a life that has clearly left Frank Sheeran as someone lacking in the most basic of emotions, which in turn has caused him to become distanced from his family, particularly his daughter Peggy (played as an adult by Anna Paquin), and even when he is on the job he seems to find no joy in what he does. Orders for hits are treated as cold and calculated business transactions, made by figureheads who equally have very little soul left within them, and what the movie does so well is that it shows these people not as maniacal and devious stereotypes – not even Pacino’s Hoffa, despite him being the most over-the-top character in the movie – but as people who see this whole thing as just another day on the job. Scorsese and writer Steve Zaillian use the lengthy running time to their benefit, replicating the rather mundane and straightforward nature of the business without really glossing over some of the less vital parts of it, and in doing so they have made a gangster movie that isn’t entirely comfortable with being a gangster movie, but intentionally so.

The much-hyped use of de-aging technology to make De Niro, Pacino and Pesci look decades younger in scenes is mostly flawless; the one time that it unquestionably slips into uncanny valley territory is in an early flashback to when De Niro’s Sheeran is shown forcing the enemy to dig their own graves, when he looks more like something out of a Call of Duty game than an actual person. Even then, the scene isn’t very long, and most of the rest of the time it’s hardly noticeable; you get used to it very quickly, and more often than not it doesn’t distract you from the story, characters, performances etc that should be, and is, the primary focus of the movie. Other films like Gemini Man could learn a thing or two from a movie like The Irishman, in terms of using de-aging technology effectively and without it being the only thing worth talking about when discussing it.

It’s a little early to tell if this truly is in the same league as Scorsese’s other classics like Taxi Driver, Raging Bull and Goodfellas – though I suspect time will be kind to this movie, even if it isn’t being especially kind to your time spent watching it – but The Irishman is an impressively told gangster epic that is easily one of the director’s best films in years, and certainly one of the year’s greatest movies. Maybe skip getting that extra soda at the concessions stand, though – your bladder will never forgive you.

The Irishman is a true Scorsese epic, with the legendary director making great use of the three-and-a-half hour (!) running time to tell a very different gangster story, filled with compelling characters and some of the best performances the likes of Robert De Niro, Al Pacino and Joe Pesci have given in years. It’s definitely one of the year’s best movies, but perhaps best experienced without a full bladder.

Want to decide what the movie’s like for yourself?
Check out The Irishman showtimes in London
via