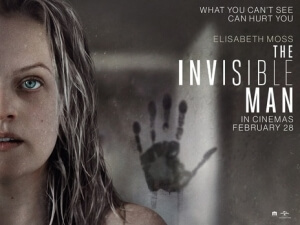 BASICALLY…: A woman (Moss) is haunted by an unseen figure that she is certain is her abusive lover (Jackson-Cohen), thought to have committed suicide…

Although Universal’s plans for a “Dark Universe” went kaput in the immediate aftermath of The Mummy’s poor critical reception and disappointing box office, perhaps its failure to launch was a blessing in disguise.

It seems that the studio’s focus is now on what it always should have been on: creating strong and legitimately frightening new spins on classic movie monsters, driven by the passion and vision of individual filmmakers rather than a Marvel-esque mapped-out plan across multiple movies. And what better person to approach for this kind of content than Jason Blum, the founder and mega-producer of Blumhouse Productions who has struck a number of hits with low-budgeted fare like Get Out, Insidious and Paranormal Activity, many of which have won over critics and audiences with scares that kept the costs down but also proved far more effective than their more expensive competitors.

His method of making these kinds of movies, which place creative control firmly in the hands of the storytellers, is exactly what Universal is looking for when it comes to rebooting some of their classic horror properties, and The Invisible Man delivers two-fold on this potentially ground-breaking new venture.

Loosely inspired by the classic H.G. Wells story of the same name, as well as the classic Universal film from 1933, this version of The Invisible Man doesn’t so much focus on the man, but more who he is terrorising. That person is Cecilia (Elisabeth Moss), who we first see escaping from her abusive boyfriend Adrian (Oliver Jackson-Cohen) during an intense sequence that neatly sets up the intense thrills later on. Shortly after she leaves him, he is found dead from an apparent suicide, but Cecilia refuses to fully believe it, knowing that he was too controlling and narcissistic to suddenly kill himself. Sure enough, she begins to experience a number of disturbing encounters with a figure who she cannot see, but is certain that it’s Adrian who has somehow found a way to become invisible.

Given that this movie comes from writer-director Leigh Whannell, who previously made the extremely underrated sci-fi action film Upgrade, it manages to be both a thrilling ride with a unique style, and also a courier for smart and timely themes that should resonate well with today’s audiences. So much of the film’s horror and suspense comes from not just the fact that you cannot see the threat in any way shape or form – there are scenes where he’s not even in that you feel like he could be, lurking somewhere in the background watching everything going on in the forefront – but also from how much of a psychological toll it is taking on the lead character. She is a victim of abuse, yet her cries of an unseen force stalking her largely go unheard by people who keep telling her that she’s crazy and just imagining things, even blaming her for some of the things he is doing. It’s classic gaslighting, but the worst thing is that people are doing it to her without even realising that’s what they’re doing, because it creates a free reign for the real abuser to continue with what they’re doing while dragging the victim further through the mud. It serves as clever commentary on both the system of abuse and also other people’s reaction towards it, which one could argue is even scarier than some of the actual scares that are in this movie.

Although, make no mistake, this movie is legitimately terrifying. Whannell paces the movie so well that the scares, even the obligatory jump-scares (of which there are very few, thank goodness), feel well and truly earned thanks to a creepy atmosphere he brings to the scene and also some legitimately shocking turns which completely throw you off guard. It’s elevated by a stupendous turn by Elisabeth Moss, whose emotional and physical commitment to the role in and of itself is impressive, making her character extremely sympathetic as well as looking absolutely terrified even when acting opposite (supposedly) nothing. Her reactions to certain things that the unseen menace is doing make the scene feel even more intense than it already is, because you never know exactly where he’s at and whenever he strikes it legitimately looks like she’s been caught off-guard.

It’s such a well-paced, well-acted and extremely effective horror movie that is legitimately smart and thoughtful about what it wants to say, and how to say it. If this does indeed finish what The Mummy started and kick off a brave new world of evil monsters and supernatural terrors, then this is a pretty damn good set of foundations on which to build it all; but maybe this time, instead of trying to cram in so much world-building, just focus on making the monsters, well, monstrous. That’s why we love characters like Dracula, Frankenstein, The Mummy and The Invisible Man, because they are legitimately terrifying monsters that we enjoy seeing be deliciously evil, and if this film is any indication then we may well be on our way back to an era of new, scary takes on classic horror icons that both fit into today’s culture and also be as spooky as we remember them. Sure enough, there may be some light in this Dark Universe after all.

The Invisible Man is a well-paced, well-acted, and extremely effective horror reboot of the H.G. Wells story and the classic Universal monster series, which contains not just a seriously creepy amount of scares which are handled brilliantly by writer-director Leigh Whannell, but also carries a clever social commentary on the cycle of abuse and our obliviousness towards it. Unlike the titular threat, you really need to see this.

Want to decide what the movie’s like for yourself?
Check out The Invisible Man showtimes in London
via