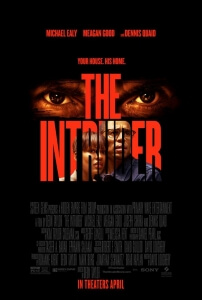 BASICALLY…: A young couple (Ealy and Good) must deal with their obsessive neighbour (Quaid) who used to own the house they’ve just moved into…

This movie is an absolute and utter delight, and not once is it for the reasons it intends.

The Intruder, to clear up any confusion, is awful; badly written, awkwardly directed, horrifically edited, it is a failure in both storytelling and filmmaking. However, I laughed more consistently through this movie than most of the comedies I’ve seen so far this year; this is the kind of film where you can sit back and have a good old chuckle at its incompetence, the plot which increasingly makes no sense as it goes along, and especially some of the over-the-top performances that make this movie an unintentionally hilarious experience.

The film is about Los Angeles couple Scott and Annie (Michael Ealy and Meagan Good), who end up buying a house in Napa Valley. However, the person they buy it from is Charlie (Dennis Quaid), who has a very strong connection to the house and continues to show up unannounced even after they move in, which begins to leave the couple on edge, especially when his more sinister intentions start to show.

That’s really all you need to know about the plot going in, because as simple as it may seem – from the offset, it looks like just another one of these trashy stalker thrillers you’d see from the mid to late 90s – nothing will prepare you for the onslaught of hilarious nonsense this movie constantly finds itself in. For instance, the very first time we meet Charlie, there is something incredibly off about him, and yet this couple – particularly Annie, who warms to him far easier than Scott does – still finds him incredibly reasonable; even later on, when it’s clear that he’s doing so much to make these people’s lives a living hell, they either are unsure it’s him doing all of this stuff or are for whatever reason unwilling to accept that maybe, just maybe, the crazy old guy who’s been giving them wide-eyed stares and sinister smiles this whole time might actually be a threat. You can’t believe how stupid these main characters are, a problem that starts and ends with the script which gives neither Ealy nor Good anything to work with outside of acting dumb as hell for 102 minutes, and their blind ignorance is so mind-boggling, especially when Quaid is clearly acting crazy throughout the whole thing (trust me, we’re going to talk about Dennis Quaid in this review), that it very quickly becomes hilarious to watch, like you’re watching clowns perform slapstick in the most banal of circuses.

The filmmaking itself is so inept that even that can raise a few strong belly laughs; the editing, for example, is so random as characters will just appear and disappear in between cuts during the same scene, it will cut to “artistic” close-up shots of characters’ eyes for no reason, and exterior shots will be accompanied by blatant ADR from the actors giving us exposition, even when there’s no reason for us to know certain things (the audience never needed to know the actual address for the house that Ealy and Good are hoping to buy, but that ADR will just give it to us anyway, whether we wanted it or not). Director Deon Taylor certainly makes the most of his $5-8 million budget by reusing the same locations over and over, in a practise that Tyler Perry would be proud of, and inserting what is clearly fake rain over an exterior shot of the house at night, in perhaps the most hilarious example of filmmaking cheapness because it’s the most fake-looking rain you’ve ever seen in your life (it’s not even showing on any of the cars in the shot). The poor filmmaking perfectly complements the even poorer writing, since it makes everything look and feel even more like a trashy thriller that would have felt right at home on the direct-to-video shelves in the 90s and early 2000s.

You can laugh at the sheer incompetence of the writing, direction, editing et al all you want, but I guarantee you that nothing will make you laugh harder than the gleefully manic performance that Dennis Quaid provides for us here. Like I said earlier, the very first moment you meet this guy there’s something off about him, and right from the word go Quaid is giving the crazy eyes and morphing his face to form a smile that looks like a cartoon character half the time, and it is nothing short of glorious. Every single scene he occupies – and thankfully, he is in a lot of the film – he chews on like it’s the last slab of roast beef at the buffet, with his rubbery face giving all sorts of expressions that you’d immediately want to hang up on your wall. What’s even funnier about his character is, when you start to learn what his intentions actually are and why he’s been doing all of this crazy stuff to begin with, he makes absolutely no sense whatsoever; he has a major connection to this house, which he’s lived in for practically his entire life, so why he would put it up on the market to begin with (even though later on it does provide a thin reason as to why) if all he was going to do was terrorise the poor saps unfortunate enough to buy it from him is a baffling failure in the script department, but Quaid seems to be entirely aware of what kind of movie he’s in, so he delivers a performance that might as well come right out and say, “I don’t give a rat’s ass about logic, I’m just having fun being the craziest I’ve ever been in a movie.”

The results, as wrong as they are, give this movie the life it needs to work as a so-bad-it’s-hilarious romp that is undeniably awful, but is so inept in its storytelling and filmmaking qualities that you almost have to see it to believe it.

The Intruder is, from both a writing and filmmaking standpoint, utter garbage as it throws out dumb lead characters, a plot that continuously makes no sense, and some very inept stylistic choices within the guise of a trashy thriller you’d find from the 90s or early 2000s – but it makes for some unintentionally hilarious entertainment, especially with a manically over-the-top turn from Dennis Quaid who goes for broke in a deliciously hammy central role.

Check out The Intruder showtimes in London
via