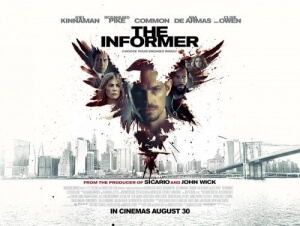 BASICALLY…: An ex-convict (Kinnaman), recruited by the FBI to infiltrate the mob, is forced to return to prison for a new assignment…

There are so many crimes movies out there that are similar to The Informer that it’s hard to really say how different it is to all the others, because they all just blend together at this point. You can watch this film and point out all of the plot points and clichés that you’ve seen elsewhere on multiple occasions, but it doesn’t matter as there have been plenty of films like this in the past and there’ll be plenty more in the future.

The one key difference that The Informer has over some of the others, is its quality; while it’s certainly bogged down by one crime movie cliché after another, it is a well-made movie with some good acting, decent suspense and some fine cinematography which immediately puts it at a very slight cut above the rest – the key phrase being, “very slight”.

We start off with – or more accurately, are just kind of thrown in to – Joel Kinnaman’s Pete Koslow, a Polish-American ex-convict who is working with the FBI as an informant within the Polish mob, on a drug deal that goes wrong when the dealer – an undercover cop – is shot dead. Under fire from his corrupt FBI handlers (Rosamund Pike and Clive Owen), Pete is forced to return to prison as part of a sting to uncover and expose the mob’s drug network from the inside. However, when it appears that he has found himself royally screwed by the feds, and with a vengeful NYPD detective (Common) on his tail, Pete must take measures into his own hands if he is to finally be free and return home to his wife (Ana de Armas) and daughter (Karma Meyer).

The worst thing about the movie is easily the script; not only does it contain nearly every cliché associated with crime movies, gangster flicks and even prison dramas, but it does neither its actors nor even director and co-writer Andrea Di Stefano – himself an actor – any favours with some really dumb plot twists and cheesy dialogue. Characters are introduced who seem like they’re going to be major players in the film’s climax, such as Eugene Lipinski’s soft-spoken mobster known as The General, but they end up being shoved to the side so hard that they practically become embedded within the walls; in their place, we’re left with more pathetic threats such as Sam Spruell’s gormy-looking corrupt prison guard, who ends up being a vital ingredient in the film’s absolutely ludicrous climax (one part in particular, which you’ll know when you see it, relies so heavily on happenstance that you’ll be wondering why, from this certain vantage point, anyone would even fall for what is going on in front of their eyes). It feels like there were a number of scenes cut from the movie that could have tied it all in much neater than the final product – if you look at the very first trailer for this film, released back in December for its original April debut before it was pushed back to August, you’ll see a couple of moments that are nowhere to be found in the actual film, which supports this theory somewhat – but whether it would have fixed the ridiculous overuse of clichés or the cheesy, often dumb, plot developments is highly unlikely.

However, while the script certainly doesn’t do it any favours, credit is due for at the very least making it entertaining to watch. A lot of that is down to the actors, who despite the questionable material still manage to breathe some intimidating life into their characters; Joel Kinnaman is a capable lead, which for me shows how far he’s come from being completely charmless as the lead character in the 2014 Robocop remake (the first thing I ever saw him in, having not seen the Easy Money movies nor the Netflix series Altered Carbon) to actually having screen presence in a role that’s better suited for him, and backed up with some strong supporting turns from Rosamund Pike and Ana de Armas too. Director Andrea Di Stefano also brings a level of intensity to his scenes, which are well shot by cinematographer Daniel Katz and keep the momentum going strongly enough for you to at least be curious about where it’s all leading to, even if where it does all end up isn’t entirely satisfying or particularly well thought-out.

It goes to show that with a competent director and a strong cast, even the lousiest turds can be polished with the fanciest shine that money can buy, even though at the end of the day it’s still a turd you’re polishing. However, it’s a serviceable yet entirely disposable popcorn thriller that you can just switch your mind off and let into your eyeballs with no harm done.

The Informer is a serviceable yet entirely disposable crime thriller with an extremely fault script filled with endless clichés and ludicrous plot twists, but is saved by some strong performances and intense filmmaking.

Want to decide what the movie’s like for yourself?
Check out The Informer showtimes in London
via