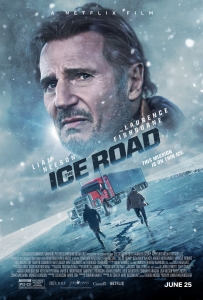 BASICALLY…: An ice driver (Neeson) leads a rescue mission across a frozen ocean to save a group of trapped diamond mine workers…

I don’t think it’s any coincidence that Amazon Prime Video (or Netflix, if you’re in the United States) decided to release The Ice Road the same week as Fast & Furious 9; after all, both are vehicle-centric action movies with implausible plotting and even more nonsensical physics, and oddly enough there are scenes in both of them where the main hero has to deal with his problematic younger brother. However, whereas Fast & Furious 9 is far more aware of how stupid it is, The Ice Road plays it a lot more straight, which somehow makes it seem even dumber than the movie where they actually fling a car into space (seriously, I don’t think many people are talking about that scene right now).

The film starts as a diamond mine somewhere in Canada suffers a major methane explosion, trapping dozens of workers roughly 400 miles underneath the Arctic Circle. The only way to ensure their survival is to transport some wellheads by truck along the “ice road”, a long strip of pure, fragile ice that lasts hundreds of miles, towards the mine’s pressure point. Among the truck drivers recruited for the rescue mission are Mike (Liam Neeson) and his mentally-challenged mechanic brother Gerty (Marcus Thomas), who are in between jobs and in desperate need of cash. They are led by the hilariously named Jim Goldenrod (Laurence Fishburne), and joined by young Native activist Tantoo (Aber Midthunder), along with actuary Varnay (Benjamin Walker) who is added to the mission by the mining corporation. However, Mike soon discovers that their already dangerous journey might all be part of a much larger conspiracy, and must find a way to confront the bad guys while also staying on track to deliver the wellheads.

I’ll give the movie this: it’s at least more entertaining than the last Liam Neeson action movie I saw, which was Honest Thief from last October (I don’t believe The Marksman, another Neeson movie from earlier this year, ever got a noteworthy release here in the UK, or at least not yet). This one is more in the same ball park as Non-Stop or The Commuter, which also had very basic plots surrounding a bunch of scenes where Neeson gets involved in a bunch of crowd-pleasing action, although in the case of The Ice Road there is stuff that happens here which dwarfs even the silliest moments in those films. There are moments in this film where people are put in perilous situations that nobody could realistically survive, and yet they do because then the movie would be over; it doesn’t matter if you’re in an explosion, you’ve got your leg tangled in thick wires, inside toppled-over trucks after trying to outrun some cracking ice, or ever pulled underneath the sub-zero, freezing ice water for a significant amount of time, for you will miraculously live to see another day in most cases. At least in Fast & Furious 9, characters actually acknowledge that they shouldn’t keep surviving so many of the dangerous things they find themselves doing, whereas The Ice Road really seems to take all of that stuff for granted, which you could argue muddies your suspension of disbelief a little bit more in this case.

It’s also a movie that relies heavily on a formulaic plot that is so familiar to viewers by this point that some of its biggest twists can be spotted a mile away. It’s very easy to guess who the main villains are, as well as the motivations behind their evil scheme, because so many other movies have used almost this exact same premise before (albeit in a slightly different context, but it’s still the same material nonetheless), and you’re simply privy to most of the storytelling tricks they’re trying to pull here. The movie doesn’t have much originality to spare, whether it’s the plot or the characters who often don’t have more than two notes to their name; Neeson, as ever, makes for a decent action lead, but you’ve seen him play this kind of down-on-his-luck character before, in movies that were perhaps a bit smarter than this one, or at the very least more tongue-in-cheek. His Of Mice and Men-esque double-act with Marcus Thomas, as the younger brother who (thanks to some PTSD-inflicted psychosis) now has the mind of a child, itself feels mined for audience sympathy, because while it’s not as offensive a portrayal of mental conditions as the one in Music, it still seems a little cheap for the film to insert this savant-like person as a major supporting character who’s only occasionally useful, and have him only exist so that Neeson can seem more likeable as a character.

There are some mindlessly enjoyable things about it, like some of the blatant CGI work can get rather hilarious, while a number of the villain’s plans to stop the main characters from completing a mission seem like they were borrowed straight from the guidebook of a Road Runner cartoon (they’re even carrying around the kind of giant dynamite sticks that Wile E. Coyote would often try, and fail, to properly use). It’s enough to a point where I can see people enjoying this as the kind of dumb action movie that you can just watch without having to think too hard about it, but even in that context I would still recommend Fast & Furious 9 over this one, because The Ice Road has much more of a serious tone and not enough of a self-aware vibe to really carry a lot of its really dumb moments. With the other film, you get exactly the kind of stupid action you want without getting too bored, whereas here it plays more by the rulebook of what constitutes a standard thriller, and so it’s not as interesting to watch.

Like with Honest Thief, it’s likely that The Ice Road will be remembered as just another in a long line of Liam Neeson action movies, although there is a bit more stupidity on display here for it to stand out a little bit more than the other once. However, when you’re buying more the fact that Han survived his Tokyo car explosion thanks to superspy trickery, rather than a film where Liam Neeson survives an avalanche caused by explosive chargers, then maybe The Ice Road hasn’t exactly achieved its “dumb fun” badge.

The Ice Road is an action-thriller which has plenty of stupidness and unoriginality, from its generic plot to its stock characters, but it lacks a truly self-aware touch to make itself more entertainingly dumb, which somehow makes a lot of its action and plotting more ridiculous than something like Fast & Furious 9.

The Ice Road is now available on Amazon Prime Video.