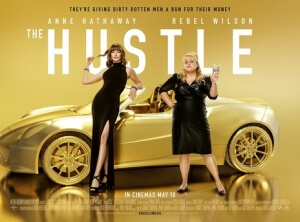 BASICALLY…: Two female con artists, one professional (Hathaway) and one amateur (Wilson), compete against each other on the French Riviera…

Before you accuse The Hustle of being an unnecessary remake of Dirty Rotten Scoundrels, just remember that the Michael Caine-Steve Martin comedy was itself a remake nobody necessarily asked for, specifically of the 1964 film Bedtime Story with Marlon Brando and David Niven. Having seen neither film, though I was at least aware of Dirty Rotten Scoundrels before seeing this new one, I was largely going into this with a fresher perspective than most; although at the same time, even though I have not gotten around to seeing the original(s), I would be willing to place good money on the likelihood that both movies combined are funnier than The Hustle.

I feel like I should mention before we continue that I am not knocking this film because it has female leads; this is a gender-reversed take on the story with Anne Hathaway and Rebel Wilson taking on the Michael Caine and Steve Martin roles respectively, and they are actresses I have enjoyed watching in several comedic roles prior to this because they are supremely talented and often very funny performers. However, it’s the fact that this is a laugh-free script that they’re working with, with virtually none of the jokes landing or so much as getting a smirk out of anyone I saw this movie with, is why this movie completely fails to work.

Hathaway and Wilson are two con artists from different walks of life; the former is Josephine, a sophisticated high-class British femme fatale who knows the art of the grift better than anyone, except for a legendary figure known as “Medusa”, while the latter is Penny, who’s more of a lowlife amateur who hasn’t gotten quite to grips with the game yet. The two happen to meet on a train towards the French Riviera, and although Josephine initially and reluctantly begins training Penny to better her act, a rivalry begins to form between the two and soon both agree to a wager: whoever is the first to con young tech mogul Thomas (Alex Sharp) out of $500,000 gets to rule the roost, while the other must pack up and leave. The game is on, but the laughs certainly aren’t.

It starts off like it’s setting itself up as an old-fashioned screwball comedy, complete with an animated opening credit sequence that’s rarely seen nowadays, but very quickly it reveals itself to be a dumb hybrid of classic farce and overlong schtick, most of it coming from Wilson who’s mostly reduced to either rambling on and on with no restraint or making constant jokes about her weight. None of it is funny, barely even raising half of a smile, because this script makes very little effort to expand on these situations and go beyond what is some pretty bottom of the barrel humour, again with a lot of it coming from Wilson who’s more than a little game to waltz into any scenario that has her play a blind person – a gag that’s actually a plot point that lasts more than half the movie – or a mentally-challenged princess who wears a rusting chastity belt. It’s far more awkward to watch than actually laugh, since the vast majority of jokes are dying in the arms of two very capable comedic actresses, who have been saddled with material that includes one of them feeding the other a French fry after soaking it in toilet water; yes, that’s the kind of humour we’re talking about here.

You have to partially feel sorry for both Hathaway and Wilson, who are just given this utterly DOA script to work with as well as some awkward direction from Chris Addison – who is himself a comedian, and a pretty amusing one at that, so I have no idea what went wrong with this directorial debut of his – although you can’t pity them too much because at least they seem to have gotten to spend a little bit of time in the gorgeous scenery of the French Riviera (although I’m not sure for how long, seeing how most of it was apparently shot in the UK), which is kind of like what most people accuse Adam Sandler and his team of doing, that being using a pretty terrible movie as an excuse to take a nice holiday in a luxurious location. Still, as beneath them as the humour is, to the actresses’ credit they are at least trying to make it work; they in no way succeed, but you have to admire effort when you come across it. Hathaway’s been in some comedies that are far more intolerable than this film – as bad as this movie is, Bride Wars was a lot worse to sit through – so this may as well be a walk in the park in comparison; she’s by far the more appealing of the two leads, only because the actress goes full camp with a high-class British accent and more exuberant personality, as though she figured that she can’t save the material so she might as well have a bit of fun with it.

From what I do know about Dirty Rotten Scoundrels – at least, what I read about it following seeing this one – this movie practically follows the formula exactly, without many alterations aside from the gender of its lead characters. With that in mind, as much as I didn’t care for this film at all, I can imagine the experience must be even worse for people who have seen and enjoy the earlier film, who are witnessing such a movie have all the humour and fun sucked out of it by a shoddy script that makes very little sense, awkward direction that’s wildly cheaper than you’d expect for a mainstream movie such as this, and with very little of the charm intact. Again, that’s coming from someone who HASN’T seen Dirty Rotten Scoundrels, or even Bedtime Story; imagine what someone who has seen it would think of this.

My guess is that they wouldn’t think much of The Hustle at all, as do I.

The Hustle is a flat remake of Dirty Rotten Scoundrels that completely fails to score even one laugh from its shoddy script, awkward direction, and mostly embarrassing performances from leads Anne Hathaway and Rebel Wilson, who despite their talents and efforts to make something of this material can’t save it from feeling like a con job of its own.

Check out The Hustle showtimes in London
on Walloh.