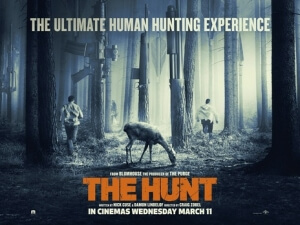 BASICALLY…: A group of strangers discover that they are being hunted by other people for sport…

Not to fall in line with every single other review out there for this film, but it’s impossible to talk about The Hunt without addressing the “controversy” surrounding it. Originally scheduled to come out last September, it was delayed indefinitely in the wake of mass shootings in Dayton and El Paso, as well as tweets by Donald Trump in which he heavily criticised “Liberal Hollywood” while supposedly pointing to this film as an example.

Although the film was shelved by Universal, that didn’t stop so-called “Liberal Hollywood” from releasing other violent and gun-heavy thrillers like Ready Or Not, which barely got a mention in the apparent war between liberal and conservative media – which begs the question, why go after The Hunt specifically? It’s no more violent than Ready Or Not was, and it even tackles some of the same themes as that film did, so what was it about this one that caused people to lose their utter minds over it?

I can think of a couple of reasons off the top of my head as to why it caused such a fuss; one, it’s a film that contains deeply political topics designed to shock and throw off people on both sides of the political debate, but its extremely tongue-in-cheek tone and self-aware attitude may be somewhat lost among certain people; and two, the movie is not especially deep or even that smart when it comes to depicting said themes, which is certainly causing a divide amongst critics and audiences as this review is being typed out, for entirely understandable reasons. However, as a pure bloodthirsty exploitation flick that’s both dumb and smart enough to entertain, it’s much more appealing.

The film starts out as a group of people wake up in the middle of nowhere, and soon discover that they are being hunted by unseen assailants. So far, so The Most Dangerous Game, but as we soon find out the people being hunted come from a predominantly conservative background – trucker hats, southern drawls, penchants for racist slurs etc – and the people hunting them are wealthy liberals, who are constantly boasting about their smug achievements while also being in tune with political correctness and current hot topic issues.

So, it’s basically Red vs. Blue: The Movie, only if the filmmakers took aim at both sides instead of choosing a clear victor.

The multi-faceted targeting is ballsy, especially in this day and age, but it does lead to some issues regarding what it actually wants to say about any of it. By taking shots at not just right-wing conservatives – references to Fox News host Sean Hannity and pride in owning multiple guns come up in their conversations – but also left-leaning liberals –  two of the hunters have a back-and-forth about the proper term to address black people, and one gloats about Ava DuVernay responding to one of their tweets – it has no real moral ground to speak of, nor anyone to completely sympathise with because they’re either hot-headed hillbillies or pretentious elitist snobs. The only person who comes closest to being any kind of character – and even then, not a wholly defined one, but at least someone who isn’t black-and-white – is Crystal, a Mississippi woman played by Betty Gilpin who is the only one of the hunted to actually possess the skills and knowledge to fight back; Gilpin’s steely performance, with traces of strong and subtle comedic timing, is by far the best part of this movie, because it makes you want to know a whole lot more about this person even when the script doesn’t give her a whole lot to work with. Aside from her, there aren’t many characters worth rooting for in this scenario, and it just comes across like an empty political statement more than a biting satire, one that’s nowhere near as clever as it thinks it is.

If the heavy-handed politics of this movie don’t do it for you, then perhaps its B-movie personality will win you over instead. It is unapologetically violent, with people getting blown up, impaled, gassed, kicked, punched, and having their heads blown off, so much so that I imagine anyone complaining about the over-excessive gore in Rambo: Last Blood will have an absolute heart attack over what goes on in this film. One fight sequence near the end is nearly on the same level as The Raid in terms of choreography alone, which livens up everything and, albeit momentarily, makes you forget how none of what’s going on really makes any sense in a realistic world. When it hones in on this kind of action, the movie actually does pick up significantly, and you can see where – if the script was a lot smarter – this could have been a really fun modern-day exploitation flick.

Unfortunately, it’s bogged down by a script – co-written by, of all people, Damon Lindelof who dived much deeper into political issues in his recent Watchmen miniseries – that has no concrete message to say about any of the politics it is poking fun at, instead feeling more like a tweet designed to get multiple likes and retweets by all sorts of politically-activated influencers than an actual movie. Though it’s not as abhorrent in that regard as Black Christmas was – this movie at least had some fun elements to it – it’s not worth getting angry about either, and especially not worth cancelling its whole release over.

The Hunt has some deliciously over-the-top B-movie thrills, led by an entertaining turn by Betty Gilpin, but its heavy-handed stab at political stereotypes on both sides makes it feel less like a movie and more like a politically-charged tweet that gets lots of likes and retweets because of its ballsy shock value alone.

Want to decide what the movie’s like for yourself?
Check out The Hunt showtimes in London
via