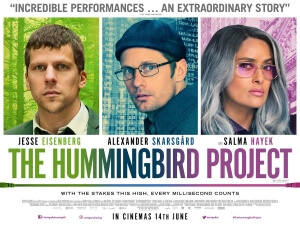 BASICALLY…: Two high-frequency traders (Eisenberg and Skarsgård) go up against their ruthless former boss (Hayek) in an effort to make millions from a fiber-optic cable deal…

Not many movies about high-frequency trading and the construction of fibre optic cable lines across multiple states can claim to be all that exciting, which is what gives The Hummingbird Project the slight edge in that extremely limited field.

French-Canadian writer and director Kim Nguyen – whose 2012 film War Witch was nominated for the Best Foreign Language Film Oscar – is behind this surprisingly intriguing corporate drama, which has no business being as thrilling and even fascinating as it is, given its rather confusing subject matter, but through the power of reasonably compelling storytelling as well as a couple of great central performances, it pulls through to be a nice little surprise.

Set in the early 2010s, cousins Vincent (Jesse Eisenberg) and Anton (Alexander Skarsgård, sporting a bald cap) are high frequency traders working for their ruthless boss Eva Torres (Salma Hayek) for a major New York trading firm, but have ambitions to construct a fibre optic cable line from Kansas to New Jersey, which would give them a millisecond head start over the competition. They soon resign from Torres’ firm and get straight to work on their project, facing several obstacles including finding a way to legally drill around government land and even dealing with a stubborn Amish community whose land they need to drill under – but they also have to deal with an irate Torres who can and will do anything to diminish their scheme, not to mention a surprising illness that greatly affects one of the two leads.

Making a movie about such a niche topic is daring, mainly because very few people outside the cutthroat world of finance barely know half of the jargon they keep harping on about, but The Hummingbird Project doesn’t do what The Big Short did and break down some of the more complicated terms in very tongue-in-cheek and entertaining ways (there’s no Margot Robbie in a bubble bath here to explain the ins and outs of high frequency trading), and instead gets right into the heart of things whilst expecting us to catch up with it as we go along. Somehow, it works because the movie is able to hold your attention for long enough that eventually you start picking up what it is that is basically going on, even if you know next to nothing about how this particular corner of the financial world functions; writer-director Nguyen doesn’t make things too complicated to understand, but neither does he treat the audience like children thanks to dialogue and characterisation that keeps the conversation respectful and accessible to complete novices around this particular subject. He paces it like a high-stakes thriller at times, which also helps to keep the suspense running high; as the movie goes along, you really do want these guys to actually fulfil their ambitions and stick it to their ruthless former boss, because the movie does a rather strong job at keeping things interesting and intense, even when it’s all centering around something that in any other situation would bore the living hell out of anyone unfortunate enough to listen.

A very large factor as to why you’re so invested in these guys and their passion project is because both Jesse Eisenberg and Alexander Skarsgård are really good in this, in what might be some of their strongest work in a long while. Eisenberg is playing more of the straight man here, whereas Skarsgård is playing the kind of role that, if this were made a few years ago, probably would have been played by Eisenberg, in that he’s a socially awkward and slightly eccentric guy who’s clearly on the spectrum but has enough social skills to at least interact with more than one person. It’s fun to see these two actors playing against type a little bit, and also rather refreshing; Eisenberg actually suits the smarmy fast-talking business type far more than whatever he was going for as Lex Luthor, and he has some very dramatic scenes as the movie goes along that feel genuine thanks to his focused and mature performance which is made to feel all the more believable thanks to the strong work he does here. On the other end of the line, Skarsgård does things here that you normally wouldn’t expect to see the actor do in a movie, and I’m not just talking about sporting a bald cap for the entire thing; like Eisenberg, he seems to relish in playing a role so far removed from what he’s used to playing, and because this is new territory for him in terms of characterisation and overall personality he finds new and exciting ways to bring fresh energy to his role while making his emotionally-stunted character feel like an actual person at times, and not just a walking caricature. That’s saved more for Salma Hayek, who with her silver highlights and threatening demeanour – honestly, at certain points during this movie, she’s more intimidating than Skarsgård who’s already quite a hulking and threatening presence (especially to someone like me who’d just finished binge-watching the first series of Big Little Lies before seeing this) – is the closest this film comes to turning into a full cartoon, as some of the things she does here are so over-the-top evil that it threatens to undo a lot of the more grounded tone this movie has successfully managed to convey; however, she is having fun in the role despite how thinly written it is, especially in a film that desperately wants to not appear so black-and-white about these things.

While the movie certainly stretches credibility at times, including a late third-act twist that feels like it’s designed exclusively to get a cheer out of the audience, it manages to do the impossible and make a very uninteresting subject feel like the most captivating thing in the world, a surprise I never would have predicted in a million years that also reminds me why I don’t work in the stock market.

The Hummingbird Project takes its potentially uninteresting subject and turns it into a surprisingly compelling and fascinating thriller, thanks to strong direction and writing, and two excellent lead performances from Jesse Eisenberg and Alexander Skarsgård who both relish in playing against type here.

Check out The Hummingbird Project showtimes in London
on Walloh.