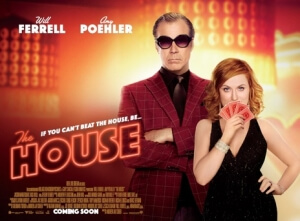 BASICALLY…: To raise the money to pay for their daughter’s college tuition, Scott (Ferrell) and Kate (Poehler) start an illegal casino in their friend Frank’s (Mantzoukas) basement…

As of this review, The House has joined several other adult comedies this summer – including Rough Night, Snatched, CHiPS and Baywatch – that have seriously underperformed with both critics and audiences, and outright flopped at the box office. There’s an article on Variety’s website at the moment that focuses on this story, and asks the question of whether audiences are finally fed up with the raunchy adults-only nature of those films, a craze undoubtedly sparked by the success of the first Hangover film in 2009, just like they were fed up with several other underperforming franchises this summer, from Pirates of the Caribbean to Transformers.

I, however, have an alternative theory about this: maybe, just maybe, audiences aren’t going to these films anymore not just because they crave something new and fresh, but because all of those films, including The House, are not very good at best. In The House’s case, it’s not very good at all; in fact, it kind of sucks hard.

That’s rather unfortunate, because there is promise in the film’s set-up: doting parents Scott (Will Ferrell) and Kate Johansen (Amy Poehler) want to send their daughter Alex (Ryan Simpkins) to college, but thanks to corrupt councilman Bob Schaffer (Nick Kroll) denying them a scholarship that would pay for her tuition, they decide to open an illegal casino to recoup the costs, along with their friend Frank (Jason Mantzoukas) who transforms his house into a fully-operational gambling centre that quickly earns them a hard reputation.

Unfortunately, all of that promise is completely wasted in an 88-minute comedy that somehow pads itself to that length with an endless assault of mostly unfunny improvisation and failed comedic one-liners from its undoubtedly talented cast. Ferrell and Poehler are two great comedic actors, from their individual early days on Saturday Night Live to their respective successes with Anchorman and Parks and Recreation, but even they feel underutilised with material that they can’t save no matter how much improv they throw at the wall, and characters that are so thinly written and developed that they may as well be playing themselves. There is rarely a moment of comedy that works here, from their desperate attempts to mine laughter from the line-o-rama roulette they are constantly using to actual scripted laughs that just do not land at all; mostly, you’re just sat there watching Ferrell and Poehler bomb on-stage for 88 minutes, while occasionally getting some relieving material from Mantzoukas who pretty much steals the show (or whatever was worth stealing).

Even at a brisk 88 minutes it feels over-stuffed, with plot-lines that go almost nowhere and characters that disappear as soon as they are introduced, even when they are built up as an important player later in the movie. There are some semblances of ideas, such as the meek Scott being persuaded to adopt a much harsher public persona to earn himself some street cred, but again they get lost in the mix and take a back seat to some comedy that rarely gets the laughs it thinks it deserves. Again, there are bits that Mantzoukas are able to make funny, even though a lot of them were given away in the trailers, but again established comedic actors like not just Ferrell and Poehler, but also Kroll and Rob Huebel are stranded by the lacking material and resort to either mugging or yelling at random to try and mine for laughs. By the end of it, you’ll be so dissatisfied with the resolutions and the attempt at comedy to even care for the mid-credits outtakes montage, and just want to forget this mess as soon as you walk out.

This marks the directorial debut of Anthony Jay Cohen, who is best known for co-writing both Bad Neighbours movies, as well as last year’s comedy flop Mike and Dave Need Wedding Dates, and you can certainly see some of the qualities of those movies in this one, albeit in a much lesser capacity. There is an underlying bitterness to the comedy, with characters that are either annoying and unlikeable or too uninteresting to really care about, and situations that come across as a bit mean, no matter what the intentions were. There will be some moments of comedy that are so out there that they do get a small amount of laughs, like the ultimate fate of a cameoing A-lister that gets so overblown it’s kind of amusing to watch (and not in an ironic way, either), but this is very much a laugh-free affair that you will be forgetting about as soon as you leave the auditorium, and what few memories you will have of it will not be very pleasant.

Again, it’s kind of a shame that this movie turned out to be as bad as it did, because the premise can actually work if it had a way better execution and didn’t just rely on a lot of unfunny improv to get by, and like I said there is some genuine talent involved, from Ferrell and Poehler to Mantzoukas and Kroll. But no amount of actual talent could end up saving something this rotten, and The House rightfully earns its place among the many other underperforming comedies this summer so far; maybe it will finally serve as a lesson to studios that in order to make your comedies hit, they have to actually be funny, and not just having popular comedic actors to carry it on their shoulders. As though it needs to be said, an unfunny comedy is no laughing matter.

The House is a giant wasted opportunity of a comedy that squanders a promising premise and a talented comedic cast in favour of some unfunny improvisation, lame and dumb scripted material that not even the likes of Will Ferrell and Amy Poehler can save, and some underlying bitterness that only the writer of the Bad Neighbours films could come up with.