The Hole In The Ground (Review)

The Hole In The Ground (Review) 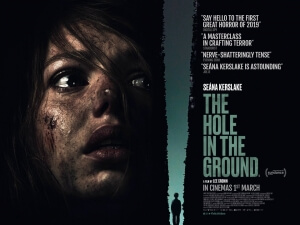 BASICALLY…: A young woman (Kerslake) begins to suspect her son’s (Markey) increasingly disturbing behaviour is linked to a nearby sinkhole…

One of the worst fears that a parent can have is that their child soon grows into a person who is very, very different from the wide-eyed innocent years of their youth – it’s an incentive that makes people cherish those moments even more with their children, and it also makes for an interesting idea to make a horror movie out of.

But while The Hole In The Ground doesn’t exactly rewrite the rulebook on creepy-kid horror flicks, it does play around with that particular parental nightmare in intriguing ways that hold your attention even when the film takes an unexpected nose-dive into conventional scares.

The film follows Sarah (Seána Kerslake) who moves with her young son Chris (James Quinn Markey) to a small fixer-upper in rural Ireland, as a means to escape from her abusive partner. One day, Sarah discovers a giant sinkhole in the middle of the woods, but thinks nothing of it – until Chris suddenly seems to disappear one night, only to show up acting noticeably different than normal; he’s eerily well-mannered, he has the courage to make friends at his new school, and even enjoys sprinkling cheese on his pasta which before was virtually impossible. However, Sarah becomes more and more convinced that this may not actually be her son, especially after a terrifying encounter with a mentally-disturbed neighbour (Kati Outinen) who immediately recognises that whatever may be impersonating young Chris is something much more worrying.

While comparisons are inevitable with The Babadook – another horror film that played with psychological mother-son relationships – and, while we’re at it, just about every other horror movie to ever feature a sinister young child, The Hole In The Ground aims for a much smoother and even a more refined pace that doesn’t throw every scare it can muster at the audience in one fell swoop. Rather, it takes its sweet time building up its scary potential through moody, atmospheric shots of the Irish countryside, especially in the dark when its creepiness really becomes more apparent, and when those shocking moments do eventually come they’re a lot more reserved and soft-spoken than the scares which usually come with a movie like this. Director and co-writer Lee Cronin wisely holds his cards close to his chest until the third act, as until then we’re left as uncertain and also extremely creeped out by the situation way before the more supernatural element comes into play, and even when it does things are still left interestingly vague enough to where you’re curious about answers but you also respect how it never spells out everything that’s going on and leaves much of it to your imagination.

However, the main problem with the film is that, while it is certainly effective in its creepiness, it’s not an especially scary movie, largely because we’ve seen this type of horror movie many times over and it doesn’t do a whole lot to spice things up a little. Narratively, it takes the steps you would expect a creepy-kid movie like this to take, so much so that you can easily predict most of what ends up happening after, and the scares – despite being well-shot and well-acted – just don’t land as hard as they are intended as a result. It’s a movie that just follows the steps through and through, not really putting a foot out of line too much to where it rebels against its own formula, and you’re just left watching an effective, but largely by-the-numbers, horror movie that features yet another creepy kid (this isn’t even the only film like this I’ve got to look forward to this month; The Prodigy, with Taylor Schilling, is coming out within the next couple of weeks, and guess what? It features yet another evil little child that the mother thinks is crazy but no-one else seems to think is – so it’s nice to know I’m getting two movies within the same month that are practically the same as each other).

It’s not an especially scary movie, despite Cronin’s atmospheric efforts, and by the time it does reach a crescendo it kind of loses its way when it just kind of pulls certain reveals out of its own sinkhole. Without going too much into detail, the climax unexpectedly becomes a mixture of It and The Descent, and again while this sequence is effectively made – claustrophobics with a fear of getting stuck miles underneath the surface are going to have a panic attack in the cinema if they go to see this movie – it feels way more over-the-top and inconsistent with the more grounded and psychologically questioning tone that the movie has spent its previous two-thirds establishing. It doesn’t gel as well with everything that the movie had been aiming for previously, which is a shame because it’s not like this is a bad horror movie by any stretch of the imagination – there are plenty of movies, some of them with their own creepy kid, that are far worse and more insulting to your intelligence than this – and the acting along with the filmmaking is reasonably good, but as a horror trying extremely hard to be on a level above the standard fare it doesn’t work as well to be anything different than any of them, as much as it tries its damnedest.

Though there’s no doubt the efforts were noble, The Hole In The Ground sadly doesn’t set itself apart enough to truly stand out in an over-crowded field of moody creepy-kid horror films; though based on what I hear about The Prodigy, something tells me I might be pining for this movie’s inconsistencies after seeing it.

The Hole In The Ground is a noble and mildly effective attempt to stand out amongst a crowd of other similar creepy-kid horror movies, but it ends up following the formula a little too closely and eventually loses its way in the third act to really be anything more than a collection of moody and atmospheric woodland shots.