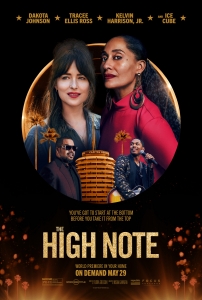 BASICALLY…: Maggie (Johnson), the assistant to superstar singer Grace Davis (Ross), finds an opportunity to fulfil her dream of becoming a producer…

Early into the COVID-19 lockdown, a group of Hollywood celebrities from Gal Gadot to Natalie Portman to Mark Ruffalo released a cover of John Lennon’s “Imagine” on social media as a means to provide a bit of joy in a bleak situation – however, it backfired immensely, with many people calling it an insensitive and patronising ploy by the rich and famous to comfort the lower-classes from the safety of their luxurious Beverly Hills mansions. The lesson taken by an alarming number of people online seemed to be that the rich and famous apparently deserve little sympathy, even though they clearly went into it with the best of intentions.

I imagine those same people will have a hard time empathising with anybody in The High Note, which makes few apologies for its glamorization of the famous lifestyle as well as the romanticised Hollywood message of always following your dreams, but anyone else who is willing to not let petty jealousies get the better of them will mostly be won over by its impeccable charm, which does make up for a number of its staggering familiarities and moments of cheesiness.

Our hero is Maggie (Dakota Johnson), the overworked assistant of music superstar Grace Davis (Tracee Ellis Ross); when she’s not scattering all over town picking up dresses and bottled beverages for her boss, she has dreams of becoming a producer, even gently remixing some of Davis’ classic hits into cleaner versions in her own time. Maggie eventually finds an opportunity to venture forth with her ambitions when she meets David (Kelvin Harrison Jr.), who is himself eager to break out as a singer, and the two of them begin working together to achieve their dreams while Maggie also balances her commitments to Davis.

Davis, incidentally, has her own stuff going on, with her manager Jack (an on-point Ice Cube) persuading her to consider a residency in Las Vegas, which is usually the sign of a singer being well past their creative prime. That sends the singer on a self-reflective journey where she, as a middle-aged black woman, begins to realise there might not be room for her or her oversized ego for much longer; it’s one of the few instances where the movie really does feel like it’s trying to reach out with a clear message, about a topic that feels relatable in any field of work for women of a certain age, and isn’t just taking easy shots at the vapid nature of the industry. It works not just because director Nisha Ganatra – who previously worked on last year’s Late Night with Emma Thompson – lets these scenes breathe and gently get their point across, but also because Tracee Ellis Ross gives such an outstanding performance that you really feel her personal struggle. She feels extremely believable as a megalomaniacal diva in the same category as Mariah Carey or – ironically – her own mother Diana Ross, but the film doesn’t portray her as a walking caricature either, giving her some very touching and funny moments which greatly humanise a character that could so easily have been played over-the-top and cartoonishly. Whenever the movie focused on her, and this great performance that Ross is giving, it actually does work.

Unfortunately, it mostly takes a back seat to a film that is otherwise a standard rom-com, one that revels in cliché after cliché without much of its own identity. While Dakota Johnson and Kelvin Harrison Jr. have good chemistry, and they are both as charming as they’ve always been, their characters and their romantic pursuits are by far the least interesting thing about this movie. It even contains the mother of all rom-com clichés, the third-act break-up, which in this case comes about because these people never realised their problems could be solved by a simple conversation, rather than lie and deceive others into thinking something else about them. It’s a shame that the movie focuses so heavily on this, when there’s a much more interesting movie about the Grace Davis character going on at the exact same time as this predictable and sub-par rom-com that you’ve seen millions of times before. I will say, though, that those two plots do intersect via a twist which I genuinely did not see coming; it’s a very cheesy reveal, and honestly I feel like an idiot for not picking up on it sooner, but I’ll give it credit for at least taking me by surprise, which not a lot of movies I’ve seen recently have been able to do.

The movie feels like you’re watching a long-lost Nancy Meyers movie from the early 2000s, and I say that as both a compliment and a criticism. It’s pure wish-fulfilment, plain and simple, but it has enough charm in its performances and its sweet overall tone to carry itself through some of its more ridiculous moments; that being said, it isn’t as deep or as engaging as it would like to be, serving mostly as a romanticised example of the classic Hollywood message of following your dreams with little regard for real-world consequences. Whether or not you’ll enjoy it will depend on your personal tastes, but personally I see it as a heavily flawed but digestible escapist fantasy, which in these dreary times is as good as we can get.

The High Note has elements of a much stronger movie beneath its skin, particularly when it focuses on the issues surrounding middle-aged music superstar Grace Davis, portrayed by an outstanding Tracee Ellis Ross, but its easy descent into predictable and cheesy rom-com territory hinders its much deeper and more meaningful potential.