The Haunting of Sharon Tate (Review)

The Haunting of Sharon Tate (Review) 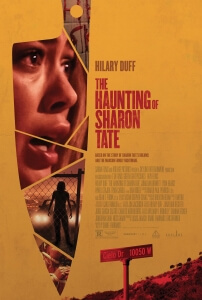 BASICALLY…: In 1969 Hollywood, actress Sharon Tate (Duff) begins to have visions of her gruesome fate…

Sometimes, curiosity gets the better of all of us. In my case, I had little to no intention of ever watching this movie – which got quietly dumped onto Netflix here in the UK – and it would have stayed that way, had I not read and heard reviews from several critics about what an absolute piece of exploitative monstrosity it is, with some calling it not only the worst (if not one of the worst) films of 2019 but also one of the worst films they had ever seen. Coupled with that, as well as the fact that there’s a far superior film out now in cinemas involving Sharon Tate and the Manson family, I finally decided to see what all the fuss was about.

Now, I really wish I hadn’t.

Every single thing you may have already heard about this movie is entirely true: this is crass, tasteless and wildly exploitative “entertainment” that takes a real-life tragedy and moulds it into a phoney and pretentious supernatural thriller, with little regard for the actual victims at the gruesome centre of it all. If that wasn’t enough to turn you off completely from ever seeking out this movie (as though you were already debating in your head whether or not to do that), then brace yourselves; you haven’t heard the worst of it.

The tone is set right away when the very first thing we see after the company logos is a quote by Edgar Allan Poe that reads, “Is all that we see or seem but a dream within a dream?”, before then playing the opening credits over footage of the corpses killed that fateful night in August 1969, the camera lingering heavily on them before finishing on the lifeless body of a heavily pregnant Tate. The “action” (and that is a term I use very lightly here) then shifts to a few days earlier, when Tate (Hilary Duff) is relaxing with her friends Jay Sebring (Jonathan Bennett), Abigail Folger (Lydia Hearst) and Wojciech Frykowsky (Pawel Szajda) while her husband Roman Polanski is away for work. She begins having terrifying visions of her and her friends being brutally murdered by members of the Manson family, and they only get more disturbing as the fateful day draws closer and closer.

This is a movie where nothing happens except for people lounging around the one location having very pretentious discussions about fate and destiny for just over ninety minutes, not once ever feeling like it’s an actual discussion that these people would ever have in real life. The writing is so bad, with paragraphs of clunky exposition and over-written sentences forming the dialogue, and the acting is even worse – there are porn stars that have given better performances than Hilary Duff and her lunk-headed co-stars – that it never feels like this is 1969, even down to the wardrobe which is less late-60s and more like something that the production quickly got on a sale at Abercrombie and Fitch. Everything about this movie feels half-assed, from the performances to the set design to the direction by Daniel Farrands (also the screenwriter), all the way to the pathetic attempts at jump-scares during its repeated insistence on this being a horror film, when in fact it’s the most poorly made of its kind in years. Nothing happens to a point of uncontainable annoyance; you just don’t care about these blank slates pretending to be the actual murder victims, and you care even less for the very self-indulgent monologues about being masters of our own fate, which feels like it was written by a film school student who hadn’t mastered actual plot or dialogue before filming their final thesis.

It unforgivably takes full advantage of the fact that it’s based on a real murder, and in some scenes shows the killing of Sharon Tate and company in far gruesome manners than most slasher films recently; not even Quentin Tarantino’s Sharon Tate film is this gory, and exploitatively so. It amounts to a pretty disgusting feeling inside, knowing that the filmmakers decided it was a good idea to make this kind of movie around people that actually died in a very tragic manner; it’s like if you took the sinking of the Titanic and turned it into an animated film with musical numbers and where all the passengers survive at the end (and yes, I know that movie exists too, to my utter dismay).  You’re just left appalled that someone would actually think to make this, and to do it in such a crass manner that completely dishonours the actual victims while having absolutely no merits as an actual horror movie on its own merits.

Then, of course, there’s the one thing that most if not all critics have brought up with this film; the ending, in which it kind of does turn into a Tarantino movie, in the sense that it goes in a completely different path than what is historically accurate. It’s not that you can’t play around with history – again, Tarantino does it in all of his films, including Once Upon A Time In Hollywood – but if you are going to do it, then you have to be exceptionally good at what you do in order to pull it off; this movie is made by tasteless hacks who had no intention of properly honouring the victims of this tragic murder, and who aren’t even that good at what they do, so it just feels like cheap, harmful exploitation made for a quick buck and an extra bit of attention as a much higher profile movie about the same topic dominates the zeitgeist.

It kind of worked, as it got me to actually watch it, and now I feel as unclean as anyone involved in this utter dreck.

The Haunting of Sharon Tate is an absolutely tasteless and vile piece of exploitation that takes the real-life tragedy and turns it into a cheap horror-thriller complete with awful performances, lazy filmmaking and pretentious dialogue. As much as the far better Sharon Tate movie Once Upon A Time In Hollywood is one of the year’s best, this is one of the worst.