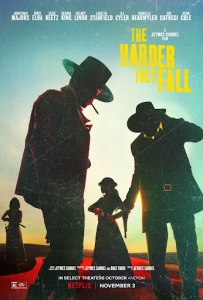 BASICALLY…: An outlaw (Majors) reassembles his gang when he learns that his sworn enemy (Elba) has escaped custody…

This review of The Harder They Fall was conducted as part of the BFI London Film Festival 2021.

What do we think of when we talk about Westerns? Perhaps the first thing to come to mind is that of Clint Eastwood or John Wayne riding on horseback across the American Wild West, in search of villainous bandits (often Hispanic) for a hefty bounty, or going up against a band of Natives (or, to use the less-PC term, “Injuns”) for dominance of the land. It is, upon closer glance, a genre that has predominantly favoured white narratives across the many decades, with multi-ethnic groups being largely relegated to either the background or, in arguably a worse outcome, stereotyped roles that only serve the white hero.

It’s a concept that director, co-writer, producer and composer Jeymes Samuel – perhaps known better as musician The Bullitts – eagerly wants to challenge with his debut feature The Harder They Fall, a Western which features an all-black main cast playing actual black heroes of the American West, long since forgotten by the whitewashing of history but are now formally given a true chance to shine. Samuel’s film does not let you forget a single one of these figures, in a film that is an absolute blast of pure genre cinema, and is quite possibly the coolest film you may watch this year.

After a prologue that sees our protagonist, Nat Love (Jonathan Majors), witness his parents being murdered as a child at the hands of outlaw Rufus Buck (Idris Elba), before then having a cross carved into his forehead, we flash forward to some years later where Nat, now an outlaw himself, learns that Rufus – who has since been locked up, seemingly for the rest of his days – has been sprung from captivity. In response, Nat rounds up his own posse of cowboys and outlaws, including his former flame Stagecoach Mary (Zazie Beetz), cocky gunslinger Jim Beckwourth (RJ Cyler), gender non-conforming Cuffee (Danielle Deadwyler), and deputy marshal Bass Reeves (Delroy Lindo), who all go up against Rufus and his own gang – chief among them his right-hand woman Trudy Smith (Regina King) and slick gunslinger Cherokee Bill (Lakeith Stanfield) – when they seize control of the black-populated frontier town of Redwood, while also giving Love an opportunity to take revenge on the man who destroyed his family.

Standard-issue Western plot though it may be, Samuel is a filmmaker that does not do things by halves, here injecting plenty of life and charisma into a narrative where every single moment counts. There are nods to Sergio Leone and especially Quentin Tarantino in the director’s style, right down to a funky soundtrack (overseen by producer Shawn “Jay-Z” Carter) and a level of violence matched only by the likes of Django Unchained and Sam Peckinpah’s The Wild Bunch, but Samuels brings a unique level of charm and awe to the story – from a punchy script he co-wrote with Boaz Yakin – which gives some of the more familiar beats a real freshness. You can tell that behind the camera, Samuel is a director with a real vision, making it all the more impressive that this big Hollywood Western with a hugely impressive A-list cast is indeed his first fully-fledged feature (he had previously directed another Western, They Die by Dawn, which unlike this two-hour-and-ten-minute adventure runs at only 51 minutes, which barely qualifies it as a feature), since his stylistic flair is one that you would often find being workshopped in smaller-budgeted fare as Tarantino did with Reservoir Dogs, let alone be put into motion right out of the gate in this costly genre flick.

As for the real-life heroes that Samuel is paying tribute to – in one of the numerous instances in playfulness on his part, the opening text states that while the events of The Harder They Fall are fictional, “These. People. Existed.” – you can pick any number of them and they would all be considered near-instant icons. A great win for Samuel is in getting a highly charismatic cast of actors to portray these larger-than-life characters with swagger and absolute coolness; no matter whether it’s a hero or a villain, you are absolutely in love with each and every one of them, because they are written well and they are performed with irresistible charm. You have two strong lead turns by Jonathan Majors and Idris Elba, both great actors who transcend the typical hero/villain roles with incredible ease, and then there’s plenty of memorable supporting turns from the likes of Zazie Beetz, Regina King, Delroy Lindo, Danielle Deadwyler (even Marlon Wayans Jr. has a small part in the movie) and, in my personal favourite turn of the whole ensemble, Lakeith Stanfield who seriously needs to be in his own movie as Cherokee Bill because the actor steals every single frame he’s in.

Samuel does a very good job at building momentum as it inches closer and closer to its explosive climax, from some of the intense monologues that some actors dominate with (highlights include Regina King relaying a childhood experience while slicing an apple), to maintaining a good sense of humour with a lot of tongue-in-cheek gags that Spike Lee would unilaterally approve of; at one point, the main characters must visit an all-white town, where everything is literally coated in the whitest paint possible. When the time comes for everything to be brought to a head, it’s highly satisfying with some fun fight choreography, tricksy camera work, and even a surprising amount of emotion; by that point, The Harder They Fall has well and truly transcended beyond just simply being a Western with an all-black cast, and has become just a really good and fun Western in general.

There is a legitimately good chance that The Harder They Fall could become an audience hit, which would ensure a lot more black-led movies like this in the future, and thus lead to a much-needed palette expansion of classic genres we once used to associate exclusively with whiteness. Here, they’ve made one hell of a strong first step in the right direction.

The Harder They Fall is a ferociously entertaining Western that showcases a formidable new filmmaker in the form of Jeymes Samuel, and an incredibly charismatic ensemble cast who drive the engaging, if familiar, narrative forward.

The Harder They Fall will be available on Netflix from Wednesday 3rd November 2021.

It will also be showing in cinemas nationwide from Friday 22nd October 2021.