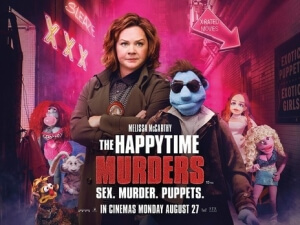 BASICALLY…: In a world where humans and puppets co-exist, puppet PI Phil (Barretta) teams up with his former human cop partner Connie (McCarthy) to investigate a series of puppet murders…

I don’t usually pray for exceptionally bad movies to come my way – largely because it would mean actually having to see them in the cinema – but I really wanted The Happytime Murders to be one of those truly special ones, especially when you read up on its history. It was a project that had been in development hell for about ten years, had actors like Cameron Diaz, Katherine Heigl and Jamie Foxx come on board only to then drop out, and even switched studios after Lionsgate eventually lost the film rights to STX Entertainment; and in all that time, its selling point of it being a raunchy adult comedy and murder mystery with felt puppets remained the same, with its bizarreness being the one thing that kept people at the very least interested. But then, shortly before it finally debuted in the States, reviews were quick to label it the worst comedy of the summer, not to mention one of the worst films of the year; and this was after a trailer campaign that tended to reuse the same jokes which led many people to believe that the movie was significantly lacking in them.

Naturally, I got myself worked up for this one; I knew it was going to be terrible after seeing that first trailer, but according to nearly everyone this was a cinematic trainwreck that I as a film critic could not pass up, even if it again meant that I had to sit down and watch the damn thing. So I went in, got my ticket, grabbed a drink, and sat down to experience the awfulness for myself… only to then find myself incredibly disappointed, even more than I was expecting. Now, don’t be mistaken; The Happytime Murders is definitely a bad movie, but it was not the unholy mess I was told to expect, and I somehow feel cheated by this movie even though I knew going in it was going to be a stinker. This isn’t bad on the same level of something truly abysmal like Grimsby, The Emoji Movie or Status Update; it’s just your average run-of-the-mill bad, which given everything I had read and heard about this movie makes me all the more sad that it wasn’t what I thought it was going to be.

The film is set in a version of Los Angeles where puppets co-exist amongst humans (how they all operate without someone putting their hand up their behinds is perhaps best left unsaid), and where a puppet Private Investigator and former cop named Phil Phillips (performed by veteran Muppets puppeteer Bill Barretta) begins looking into a series of murder cases that have seen various felt cast members of the popular sitcom The Happytime Gang end up dead. When his brother, one of the actors on the show, winds up dead, he begrudgingly teams up with his former cop partner Detective Connie Edwards (Melissa McCarthy) to catch the culprit and solve the mystery.

Except, it really isn’t that much of a mystery because it’s pretty damn obvious early on who the killer is going to turn out to be, who else might be involved, why they’re doing it all, and how it’s all going to play out. That’s because, despite the fact that this is a comedy with puppets, the crime plot that they’re going with here is perhaps the most basic one that they could have gone with, and they’re not even satirising any of the clichés that come with it but are just doing them instead with a straight face. It’s fascinatingly lazy in how it sets up this plot, as if they think the audience is so stupid they couldn’t see everything coming a mile away, which goes hand in hand with how everything else in this world, from the forced-in social commentary about racism that makes Bright look like Zootropolis, to the way these puppets operate in society, is so uninspired, uninteresting, and really quite bland. There’s no creativity to this alternate universe, it’s just Los Angeles as we know it but every now and then there’s a puppet walking by, and you get the feeling that the filmmakers – among them director Brian Henson, son of Muppets creator Jim Henson and also the director of some of their most popular movies like The Muppet Christmas Carol and Muppet Treasure Island – put no thought into making this world seem interesting or at the very least provocative, if only so they could just get this movie out of development hell and over with so they could move on to hopefully better things.

If it fails as a mystery as well as a world-building exercise, it really misses the mark as a comedy. It’s just not very funny, with many of the jokes in this movie revolving around the fact that it’s puppets who are saying and doing all this raunchy and X-rated stuff, whether it’s cursing like a sailor to indulging in drug activity – they snort sugar like it’s cocaine – and especially sexual hijinks (for example, puppets ejaculate silly string, in case you were wondering; oh, and there’s also apparently a fetish for milking puppet cows that spray milk everywhere), which can all get very tiresome by the end of the first act. If you want a adults-only puppet movie that does this sort of debauchery to a much more effective and provocative degree, just watch Peter Jackson’s Meet The Feebles which did far more outrageous and disturbing things than this movie thinks it’s doing, and was above most other things actually funny every once in a while. That movie also didn’t waste talented actors in roles that only require them to show up and do next to nothing, like Melissa McCarthy who is just there doing her usual schtick with no alterations, and most notably Joel McHale who’s essentially the same character as Will Arnett in Show Dogs, only he gets so much less to do here that you wonder why they even bothered hiring him for this one. I would honestly advise you to save yourself some money and find a copy of Meet The Feebles somewhere online, or honestly any other adult-oriented puppet project like Team America or Avenue Q, all of which did the whole “Muppets but for adults” thing way better than The Happytime Murders does.

There’s so much about this movie that really doesn’t work, including parts I don’t even have much time to get into like how some of the puppets’ voices don’t always sync up with the puppeteers’ hand movements, and yet I still found myself utterly let down by this movie. While it certainly met my expectations by being a pretty bad movie, it did not turn out to be the disaster I had been told to expect; there are parts where you can tell that this director is at the very least trying to inject some life into it, and of course you can’t at all fault the incredible talents of these numerous puppeteers that are largely wasted on this film, but as lazy and uninspired as this movie is, which wastes an intriguing premise on a bunch of crude sex and language jokes, I just couldn’t find it in my heart to completely get mad at this one. I’ve seen plenty of films this year alone that are worse than this (hell, this isn’t even the worst Melissa McCarthy movie I’ve seen so far in 2018), but it’s still not a good movie at all; right now, I don’t know if this will make it onto my Worst Of list at the end of the year, but it might only because I just found it so underwhelming even as an expectedly bad movie.

It’s one of the few times I’m disappointed in a movie for not being enough of a disappointment, which is odd to say about a movie that was sold on a scene where puppets ejaculate silly string, but there you go.

The Happytime Murders is certainly a bad movie, marred by a slew of juvenile and unfunny jokes that do nothing to set up the puppet-centric world it all takes place in, but anyone going in expecting a colossal disaster may end up even more disappointed.