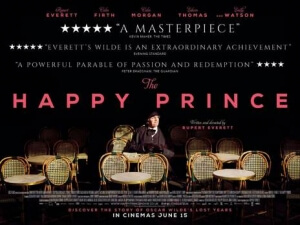 BASICALLY…: Disgraced author and poet Oscar Wilde (Everett) looks back on his past failures as he slowly approaches his own passing…

Given how much Oscar Wilde seems to have been a constant companion throughout Rupert Everett’s life and career, from acting in film versions of the playwright’s An Ideal Husband and The Importance of Being Earnest, to developing an early fascination with his work as a child, it’s quite a wonder why Everett hasn’t actually played him in a movie up until now. After all, he seems like the most perfect casting imaginable; strikingly similar in looks, flamboyant as holy hell, and theatrical to the extreme, often entertainingly so.

I assume that Everett got tired of waiting to be offered the role, because here he is now with The Happy Prince, a film in which he not only stars but also directs and writes, marking his feature debut in the latter two. It’s the Oscar Wilde film that Everett was born to make, of that there is no doubt, but while the production is certainly ambitious and well-made, there are certain other things about it that prevent it from being truly great.

The film follows Wilde (Everett) in the twilight years of his life, cast out of London society following his two-year imprisonment for gross indecency, and trying to live on what little he has left in Paris. As his health rapidly declines, he attempts to make amends with several figures in his life before he dies, including his estranged wife Constantine (Emily Watson) and his younger male lover Sir Edward Douglas (Colin Morgan), all with varying degrees of success. He also tries to make his last days count as much as they can, even as the money dries up and the friends become growingly scarce.

The Happy Prince takes its title from Wilde’s short children’s story, about an ornate statue who asks a swallow to take the treasured jewels from his body and give it to the starving village, only for both to die for their selfless deeds, and then receive eternal bliss in the afterlife. It’s no coincidence that Everett chose this as the name for his Wilde passion project; aside from being fascinated with the story as his mother read it to him as a child, there are a lot of notable similarities between the story and that of Wilde’s life. Oscar Wilde was a man who was loved by all for his wit and prose, which he gave to audiences like coins to a vagrant, only for him to pay the consequences when he was caught out for his homosexuality, and was subsequently shunned by almost everyone for his affiliation with the same sex. Everett portrays Wilde in this film as an amalgamation of both the statue and the swallow, someone who wanted to bring happiness to others but suffered greatly in his actions, and the film doesn’t shy away from the tragedy of his downfall, from being taunted and spat at by numerous mocking passers-by to experiencing a cold reunion with the brash and arrogant Douglas. It’s a role and depiction that only Everett could pull off, and the actor magnificently allows us to see the pathos in this man’s soul, while also letting us see that this was someone who wanted nothing more than to bring joy to everyone around him. After all, as Wilde himself once said, “There is only one thing in life worse than being talked about, and that is not being talked about.” Everett embodies that in his on-screen portrayal of Wilde, and his ability to show the tragedy and the light in his performance is what makes it one of the stand-outs of his career thus far.

Behind the camera, Everett has a keen eye that’s expanded further by John Conroy’s beautiful cinematography, which brings out the handsome colours of its European setting and, along with the vibrant costumes and sets, makes it a very well-crafted movie at the very least. However, it’s the script and the editing where the film falters most; Everett’s screenplay refuses to adopt a traditional narrative structure, which isn’t necessarily a problem when done well, but here it tends to jump around a lot to a point where it becomes slightly confusing as to which time period we are currently in. The story lacks any real emotional weight, as not enough time is given to certain relationships that make them seem somewhat cold when the end draws near for Wilde; at the beginning, he is shown to be in a friendship with two young French boys, but then they disappear for a while and only come back near the conclusion, where we are asked to become emotional over their sadness for their departing friend, only for that to backfire because we’ve barely spent much time seeing these boys interact with Wilde and forming a genuine connection with him. The editing, too, feels very random at times – it’s a non-linear narrative, which again has proven to work well in the past, but here in the middle of certain scenes it will just suddenly, out of nowhere, cut to a montage of Wilde’s trial and conviction, only then for spring forward again to a slightly earlier point in his later life. It’s like the movie was edited by a Thermomix, mashing together all these instances into something that ultimately tastes like a very uneven product, which is a shame because if the script was tighter and more focused then it wouldn’t necessarily have that problem, and Everett would have his masterpiece that he undoubtedly set out to make.

Though it is certainly ambitious, and you can see the passion in Everett’s acting, direction, and even parts of his writing, his tale of The Happy Prince is just decent’ a film that’s nothing really special but worth mentioning just for the cinematography, handsome production values, and Everett’s lead performance. That’s something of a shame, because this really could have been great. Instead, it’s just fine.

The Happy Prince is a passion project for director-writer-star Rupert Everett that mostly pays off, let down only by its uneven script and random editing, but save by handsome production values and Everett’s masterful lead performance.