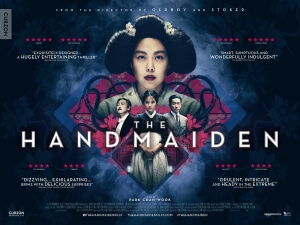 BASICALLY…: A young Korean woman (Tae-ri) is recruited by a conman (Jung-woo) to assist him with his scheme to marry and defraud a wealthy Japanese heiress (Min-hee), which leads to unexpected passions…

Korean director Park Chan-wook is known for making films that seem fairly straightforward on paper, but are given eye-opening and provocative twists when actually executed. For instance, his Vengeance trilogy – comprised of Sympathy for Mr. Vengeance, Oldboy and Lady Vengeance respectively – is a collection of mere revenge films at heart, but Chan-wook gives each of them a twisted, bloody mentality that really makes them stand out from other revenge movies like them. Basically, if you want a simple story to be turned into something far more complex and gruesome than originally intended, then Park Chan-wook is your man.

His latest film, The Handmaiden, is yet another example of these natural talents of his, taking inspiration from British author Sarah Waters’ book Fingersmith and adapting large chunks of what seems to simply be a passionate tale of forbidden love into not just an entertaining tale of lust and deceit, but one that is infinitely more satisfying than the source material it was based on.

Set in 1930s Korea, under occupation by the Japanese, a young Korean woman named Sook-hee (Kim Tae-ri) is hired to be a handmaiden for Japanese heiress Lady Hideko (Kim Min-hee). However, Sook-hee is actually a pickpocket hired by a conman posing as a Japanese count (Ha Jung-woo), as part of his scheme to seduce and marry Hideko, and then do away with her so he can claim her fortune. But the plan threatens to go south when Sook-hee and Hideko begin to have strong feelings of passion for each other, which paves the way for twist after twist to make itself known, revealing a highly complex plot that’s been going on the whole time.

The direction that Chan-wook has gone with to bring Waters’ story to the big screen – albeit in his native Korean language and environments – is to fully embrace its underlying themes of eroticism, perversion and sexuality, and it turns out to be one of the most genuinely erotic films of any nationality to be available in mainstream cinemas in years. Seriously, the Fifty Shades series WISHES it could be this titillating; in every scene wherein the two women fully embrace their burning physical desire for one another, you really feel the passion and the love they have for each other, and Chan-wook ensures that these scenes don’t go fully into the realm of just being pornographic, though even when it gets close at times – a POV shot of Sook-hee’s face from a vagina amazingly isn’t as silly as it sounds – it’s still respectful of the story and the characters’ personal journeys within that story. These themes of sexual discovery are recurrent throughout the film, with extended scenes of Hideko performing extracts from her abusive uncle’s collection of erotica to an audience of suited gentlemen, with the delivery of a robot performing Shakespeare. In those scenes, her wooden deliveries of such smutty material reflect a confined and manufactured attitude towards sex designed to supress a more burning desire, and it’s only in scenes where she and Sook-hee are becoming intimate with each other does she embrace a more animalistic side to her own sexuality. Hideko’s sexual journey is arguably a complex one, while Sook-hee is a bit more of a carefree and bubbly nature, though not without a side of darkness to herself either. Both women come together (ahem) for a combined sexual journey that is liberating to watch unfold, because Chan-wook takes the time to establish these characters and make them interesting in their own ways, so that when they do end up getting intimate it feels natural and progressive rather than exploitive.

However, the film is also a multi-layered crime thriller, one that includes fake personas, false pretences, and more double-crosses than your typical sting movie. In that regard, the film also works well, as the story always has your attention even when it’s constantly revealing another layer to everything, and you’re interested enough to see how everything comes together in the end. It’s fascinating seeing events we’ve already seen suddenly be played out under different meanings, and it always catches you off guard as much as it does certain characters in the film. It has tremendous re-watchable factors to it, only to see how these scenes will look once you understand the full context of them, although that might be difficult if you’re not entirely willing to sit during a film that’s almost two-and-a-half hours long (or just over, if you’re watching the extended Director’s Cut version, which is also playing alongside the theatrical cut).

But although at either length it can perhaps be a bit too long, it’s worth it for a conclusion that’s reasonably satisfying, more so than even the one in the book this film was based on, and ends up tying up everything neatly into a swift and neatly wrapped package. It serves as a near-perfect ending to a film that has constantly been entertaining with its encouraging and complex themes of sexuality and eroticism, and also its fascinatingly twisty plot and characters. Chan-wook has once again made a film that should be a simple story on paper, but given it a touch of personality and flavour to form a strong and intriguing identity, one that should not be ignored by lovers of foreign cinema everywhere.