The Half of It (Review)

The Half of It (Review) 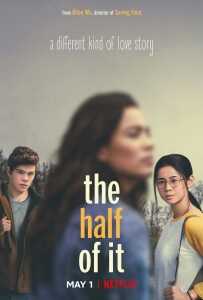 BASICALLY…: A shy high school student (Lewis) is asked by the school jock (Diemer) to woo the pretty Aster (Lemire) on his behalf, but she ends up falling for Aster too…

Edmond Rostand’s classic play Cyrano de Bergerac, in which the titular character woos the woman he loves through letters on behalf of another more dim-witted lover, has been adapted numerous times over the years through film, animation, radio and opera, and like many other stories told and told again countlessly it’s one where you have to really dig deep to try and find a fresh new take on the material for it to really work.

By not only transplanting the story into modern-day, but by having the main character be a female high school student of international descent whose sexuality is starting to emerge, The Half of It manages to make the familiar story seem like one you’re hearing for the first time, and it does so in a real, sweet and touching manner.

We begin as Ellie Chu (Leah Lewis) keeps to herself during her final year of high school, in a small town somewhere in the Pacific Northwest that seems to be deeply rooted in its religious beliefs (church seems to be a main port of call for many of its citizens). She manages to earn an extra bit of cash on the side by writing other students’ essays, which prompts dunce-headed jock Paul (Daniel Diemer) to approach her with a simple request: write a love letter to a girl he likes called Aster (Alexxis Lemire), who is the local pastor’s daughter and far smarter than he will ever be. Ellie manages to spark a written conversation with Aster, under Paul’s name, and it soon becomes clear to Ellie that she has way more in common with her than the guy she’s helping out, which causes her to realise, for the first time, who she really is.

There’s a number of clever things that writer-director Alice Wu does to match Rostand’s original story with themes that resonate much better in a more modern society. In the original play, Bergerac lacks self-confidence because of his enormous nose which he feels makes him ugly and unapproachable; in this film, the problems that the main character faces are a little deeper, with her overwhelming feelings of being an outsider coming from her and her father’s emigration from China (at numerous points, bullies drive past her on her bike shouting derogatory names towards her based on her last name), not to mention her realising that she is gay in a community which, again, seems very much rooted in Catholicism. You identify with the reasons why she doesn’t simply come out and say what she’s feeling, instead choosing to go along with this charade no matter how far it goes, because she is in a place that is steeped in quiet judgementalism towards everything she says and does, all because of the fact that she is different and thus taken for granted so many times. However, you also sympathise with her as she constantly makes connection after connection with this girl, only to look so defeated every time she is reminded that the girl she likes must end up with the boy she thinks she is talking to, and the way in which Wu paces her story out with enough room to let these characters breathe and form meaningful bonds with each other really drives the drama right through the most tender spots.

It’s a movie where you can tell at least two-thirds of it were written from personal experience, with Wu herself coming from an immigrant family who would later identify as a lesbian (she even explored similar themes in her feature debut Saving Face back in 2004). The first two-thirds feel like they come from someone who really knows what it feels to be in the position that Ellie Chu finds herself in, labelled as an outcast but nonetheless becoming more and more comfortable with her own desires, and there are multiple points in her script which certainly reflect the trials and tribulations of growing up in a community where the only exciting thing seems to be other people’s rejection of anything considered different. The final third, however, descends much more into contrived territory, with people saying and doing things which feel very out of character for them by that point, just so that the film can work in numerous third-act clichés that feel a lot more disingenuous than the movie started out as. Everything before then was working fairly well, with even some of the more familiar tropes being used to reasonable effect, but the fact that it had to be more of a movie than something which felt more real and honest is kind of a shame, because it was doing far better when it wasn’t leaning into the kind of stale clichés it was trying so hard to avoid.

The fact that it does kind of fall apart a little bit at the end, with resolutions that don’t feel very satisfying given the enormous build-up during certain character arcs, leaves me with not quite as glowing a review as other similar coming-of-age teen flicks like The Edge of Seventeen or Lady Bird, but it doesn’t change the fact that, for at least two-thirds of this movie, The Half of It was working well enough. It is a sweet film, where you really believe the chemistry between the characters who are funny and likeable enough to make you want to root for them, and it’s also smart with some of its translations from the original source material that really do make it feel a little fresher than some of the more straightforward adaptations of Cyrano de Bergerac.

It’s worth a watch, if you’re in the mood for something light but undoubtedly sweet.

The Half of It offers a fresh new take on Cyrano de Bergerac with timely themes that cleverly replicate some of the original story’s plot points, and a queer love story that’s made more delightful by some truly likeable performances and some heartfelt writing and direction from Alice Wu, even though the third act falls a lot more into overly-familiar territory.