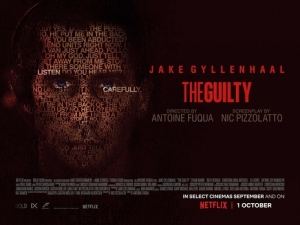 A movie like The Guilty – director Antoine Fuqua’s remake of the critically-acclaimed Danish film of the same name – is a product of its time, in that you can clearly tell with its limited on-screen actors and sets that it was filmed with severe restrictions and COVID-19 protocols on-set. Sure enough, not only did Fuqua shoot his movie during the height of the pandemic last year, but since he was within proximity to someone who tested positive for COVID-19, the filmmaker was forced to direct from a nearby van. Luckily, since the shoot lasted a whopping eleven days, barely any time was wasted in completing principal photography, and Fuqua can add “remote filming” to his CV of ambitious directing skills.

While the behind-the-scenes trivia is noteworthy in and of itself, the movie is also pretty decent – even though, as with any other Americanised remake of a European hit, it perhaps pales by comparison.

As in the original, The Guilty is set entirely within an emergency call dispatch centre, and predominantly features just one actor interacting with others over the phone. In the remake’s case, our main character is Joe (Jake Gyllenhaal), an LAPD cop who has been placed in a 911 call centre during an investigation into some of his on-duty conduct. Joe is largely bored with his temporary position, but one day receives a call from a woman named Emily (Riley Keough) who covertly informs him that she has been taken captive by her ex-husband Henry (Peter Sarsgaard) in his white van. As he traces the call and tries to pinpoint the van’s location, Joe begins getting too engrossed with the ongoing case, to a point where he stays on long after his shift is over and makes personal calls from his phone to investigate certain people’s background and put the puzzle pieces together.

For what is effectively a chamber piece, Fuqua does manage to keep the momentum going as much as he can with what few resources he has made available to himself. He makes effective use of the limited space in which we spend the entire movie, with tricksy camera angles capturing Gyllenhaal’s Joe at his desk or in tight close-ups where we can practically smell the sweat pouring down his head. The editing here is subtle in its role of building suspense, with frequent but well-chosen cuts subliminally crafting the illusion of a high-octane action scene despite never leaving this location. It’s certainly one of Fuqua’s tighter films in a while, after a string of films which perhaps needed at least one more go through the chopping block to get it down to a more natural pace and length (The Guilty comes in at about 90 minutes, the filmmaker’s shortest since his 1998 debut The Replacement Killers).

Then, of course, there’s the fact that Jake Gyllenhaal easily carries this movie the whole way through. As the only main actor on-screen, Gyllenhaal has a presence that is incredibly cinematic, restrained when he needs to be but loose and free whenever the script – by True Detective creator Nic Pizzolatto – and always giving the correct reaction whenever someone does something stupid, or tries to put him in his place, or even when he’s contemplating his own life choices. He absorbs your attention as he experiences overwhelming frustration in this incredibly tense situation, in a performance so well crafted that you too feel the mounting pressure he is under. As for the other actors in the film, many of whom are only ever heard on the other end of a phone call, the obvious joke would be to say that they’re all phoning it in, but there are some really raw vocal performances from the likes of Riley Keough, Peter Sarsgaard and Ethan Hawke, so much so that you are almost moved to tears yourself by turns you can’t even see.

However, if you’re a fan of the Danish original, you’ll likely watch this version and find that very little has been added to the story, other than the English language. From what I know about the original, Fuqua’s The Guilty follows it pretty much exactly to the last detail, although certain parts have been Hollywoodized to make it a little more appealing to Western audiences; for instance, a very disturbing detail of the unfolding plot is retconned here for the needless sake of a happy ending, which diminishes its impact significantly. Like a lot of American remakes of international hits, you likely won’t find better than the original, though this is hardly the worst example of Hollywood taking an acclaimed foreign picture and morphing it into something more contemporary. There are certainly a number of qualities to Fuqua’s version, but again they’ll likely come up short if you have the opportunity to view the original beforehand.

For the uninitiated, though, it’s a fine enough thriller which gets the job done fairly simply.

The Guilty may falter in comparison to the critically-acclaimed Danish original, but for newcomers there are noteworthy achievements from its tight and efficient filmmaking to Jake Gyllenhaal’s commanding central performance.

The Guilty will be available on Netflix from Friday 1st October 2021.