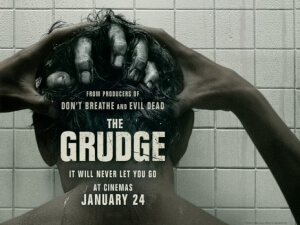 BASICALLY…: A police detective (Riseborough) investigates a house that has been cursed by a vengeful ghost who dooms anyone who enters it to a gruesome death…

So far, 2020 has given us two examples of typically lacklustre January horror releases, between The Turning and now the new version of The Grudge. While neither are particularly good, they’re also not worth getting too angry over – unlike audiences, who gave both films an F grade on Cinemascore – because they’re both so uninteresting and dull that any emotional reaction would be wasted on them.

The Grudge is especially derivative, because not only is it not scary in the slightest but it is also wasteful in a different sense, in that it squanders the talent of its filmmakers and its surprisingly pedigree cast for a series of lame jump-scares that fail to inspire even the slightest bit of fear.

Much like the previous films in this series – both the original Japanese ones, and the American renditions – the film is told in a non-linear format, making it feel like an anthology film of sorts. The main wraparound segment follows rookie police detective Muldoon (Andrea Riseborough), who along with her young son is new to the small Pennsylvania town where this all takes place, as she investigates a series of gruesome deaths that link to one seemingly normal house in the suburbs. From there, we see the numerous events that led to several people’s deadly demises; there’s real-estate couple Peter and Nina Spencer (John Cho and Betty Gilpin) who try selling the house shortly after the occupants’ murder-suicide; there’s Detective Wilson (William Sadler) who goes crazy after entering the house to investigate the aforementioned murder-suicide; and then there’s elderly couple Faith and William Matheson (Lin Shaye and Frankie Faison), who call upon assisted suicide consultant Lorna (Jacki Weaver) when Faith’s mental state rapidly deteriorates. All of them, including Muldoon, end up being connected by a vengeful ghost brought over from Japan, which dooms anyone who enters the house which it haunts to a horrible end.

The film shares similarities with Rings, another reboot/remake of a hit American remake of an original Japanese horror, in that it tries to expand the established mythology but in doing so it completely fails to be interesting or even scary in its own right. However, this movie is a notch above Rings – though not by much – because, for one, the acting is a lot better in this; there are a shocking amount of actors in this film who you would never imagine would want to sign on to a mediocre January horror movie like The Grudge, yet the likes of John Cho, Betty Gilpin, Andrea Riseborough, Lin Shaye and even Oscar nominees like Demián Bichir and Jacki Weaver are all present here and, even more surprisingly, give legitimately strong performances that a film like this honestly doesn’t deserve. On the one hand, it’s admirable that these actors are making the absolute most out of the light material that they’ve been given, but when you realise that all of their noble efforts are going into a movie that is utterly let down by a scare-free script you start to wonder why they even bothered to actually do their jobs when the material isn’t good enough for them.

It is no exaggeration when I say this movie has absolutely no real scares to speak of; sure, there are cheap jump-scare moments that plague nearly every bad horror movie, in a desperate attempt to mine at least one scream from its audience, but they are exactly that, and they’re not even done in ways that are interesting or even startling. Every once in a while there will be a creepy shot – which does show that writer-director Nicolas Pesce, previously of The Eyes Of My Mother and Piercing, has at least some idea of how to frame a spooky scene – but by and large, the scares come courtesy of writing that fails to draw you in because you’ve seen these types of scares before, and you’re counting down the seconds until a jump-scare happens instead of actually being sucked in to the atmosphere and unpleasant cinematography. It isn’t able to thoroughly hold your attention, because although the acting is strong the plot and characters feel undercooked and don’t make you care all that much, so for most of it you’re just left watching a pretty empty movie that has no substance to offer outside of some distinctive performances.

It’s definitely not a good horror movie, but much like The Turning it’s not worth getting too mad about because it’s just too boring to be worth it. If the movie had more of an unpleasant streak with elements that were legitimately insufferable, then perhaps I’d be madder at this movie’s existence, but because there is actual effort on part of the filmmakers and the actors to try and not make this a throwaway January horror release, it’s not as memorably bad as it could have at least been. I guarantee that in a couple of months – hell, maybe even a few weeks – this movie will be forgotten by pretty much everyone, which can be argued is a fate worse than being downright awful, because then people would at least remember it. Instead, The Grudge is a nothing movie that might as well be a ghost in and of itself.

The Grudge is an instantly forgettable horror movie that fails to scare or do anything interesting with its established mythology, despite a clear effort on the parts of the filmmakers and especially the surprisingly starry cast to try and make this a notch above other typical January horror releases, but in the end it amounts to nothing and feels vastly empty to anyone wanting actual chills out of a movie like this.

Want to decide what the movie’s like for yourself?
Check out The Grudge showtimes in London
via