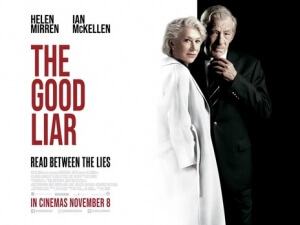 Having turned 80 this year, Sir Ian McKellen is well within his rights to start thinking about settling down before the inevitable kicks in, but films like The Good Liar are there to serve as a definitive statement that, in fact, he is not going anywhere just yet.

Collaborating with director Bill Condon for a fourth time – following Gods and Monsters, Mr. Holmes and Beauty and the Beast – McKellen is on top form as Roy Courtnay, a career con man who has been swindling people for decades. His latest target is Betty McLeish (Helen Mirren), a recently-widowed lady who he meets via an online dating service, and they soon hit it off to the reluctance of her grandson Steven (Russell Tovey), with Roy planning to eventually make off with her £2 million savings.

Given that this is a film all about deception and mistrust, it might not be all that difficult to guess where things go from there – but the beauty is in the journey, not the destination. Condon’s film, from a script by Jeffrey Hatcher who in turn based it on Nicholas Searle’s book of the same name, leaves you constantly waiting for the other shoe to drop, because you vaguely know what’s coming but you don’t know how it’s going to get there. There is a true Hitchcockian tone to the way it is paced and framed, with each scene setting up radical plot twists that leave you annoyed by the fact that you didn’t spot them sooner, and insignificant things from previous scenes suddenly becoming much more important than first thought. Both Condon and Hatcher have done their homework in replicating that style of storytelling which made Hitchcock such a revered name, but with their own cinematic voice that’s light on the surface and much creamier at its core. While Condon keeps the mystery intact with tight pacing, firm focus and a solid eye for detail, Hatcher lays the twists from Searle’s book on thick and fast, which often border on ridiculousness but are certainly never boring. Together, they make you fully invested in this juicy story from beginning to end, surprising you at every turn if, again, you have a rough idea of what is eventually going to happen – but by God, you have no idea how it’s going to get to that point.

They, however, are only the second-most effective duo involved with the film. Ian McKellen and Helen Mirren, two established actors who have remarkably never shared the screen together until now, are both exceptional in this, working well together as an on-screen couple and individually as the powerhouse actors that they are. McKellen plays wildly against type as a true bastard of a man, and as the story goes along you get to see more sides to him that make him truly despicable, resorting to violence, murder and later as we find out much worse to get his own way; needless to say, McKellen is having plenty of fun playing this dastardly figure who you’re just waiting to see get his deserved comeuppance. On the flip side, Mirren has plenty of great moments as someone who in an actual Hitchcock thriller would be the equivalent to Kim Novak in Vertigo, one of those leading ladies who at first seem too good to be true and then later on reveal there’s a lot more going on underneath the surface. It’s a couple of strong performances from two great acting legends, and they prove to be essential ingredients in the potion that compels audiences to stick with this story all the way through.

Once things finally start to unravel, and virtually everything leading up to it comes back into play in some form, this is when the film will most likely make or break it for viewers. Some will undoubtedly feel that the twists in this movie are rather silly and beyond elaborate, and it’s understandable why they would feel that way about it; for me, personally, while some of it got a little ridiculous I didn’t really care all that much because I was getting a lot of entertainment out of this wildly suspenseful ride and found myself completely accepting that this is the direction the film wanted to head down, no matter how far-fetched some of it could be. A couple of factors played into this – one, the performances from both McKellen and Mirren were so compelling that I had no trouble believing nearly everything that came out of their mouths; and two, Condon’s direction and Hatcher’s screenplay were ensuring that the pace was solid and never lulled for me to become completely uninterested. This is a case where the production values were so strong that they were enough to overlook the fact that, yes, some of what is going on right in front of us doesn’t completely add up when you really think about it; nobody goes onto a rollercoaster and spends the entire time thinking about how the laws of gravity are causing the carriages to pick up all that speed, they instead just accept the thrill of it all and have fun until it finally comes to an end.

That’s kind of how I feel about The Good Liar, it’s an entertaining thrill ride that certainly isn’t afraid to get a little bit ridiculous every now and then, but I honestly don’t care because I’m having so much fun on this incredibly convoluted journey that it’s enough to overlook some of its narrative flaws. It’s perfect for anyone who just wants to experience a fun throwback to classic Hitchcock thrillers without having to think all that much, or if they are so taken by the idea that both Ian McKellen and Helen Mirren are having an absolute blast in roles that feel tailor-made for their unique acting skills. In the case of McKellen, it’s one hell of a way to declare that turning 80 isn’t slowing him down just yet.

The Good Liar is an entertaining throwback to classic Hitchcock thrillers which, while certainly silly and even a little preposterous at times, never lulls thanks to suspenseful direction and writing, and two great actors like Ian McKellen and Helen Mirren at the top of their game and both having extraordinary amounts of fun in their meaty parts.

Want to decide what the movie’s like for yourself?
Check out The Good Liar showtimes in London
via