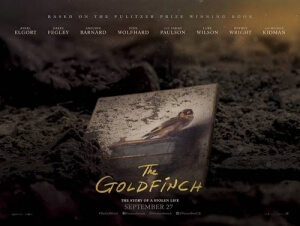 BASICALLY…: A young man (Elgort) carries a secret from his childhood when his mother is killed in a bombing at an art gallery…

I’ve never been much of a book reader, but that’s mainly because I lack the attention span to finish a whole novel without letting my mind wander. I just can’t seem to process the written word like I do with cinematic visuals, which is probably why I’ve always favoured movie adaptations of books more than the books themselves, because then at least I would be able to tell what’s going on without getting too lost or easily distracted (depending on the material, obviously).

Watching The Goldfinch, the adaptation of the bestselling novel by Donna Tartt, was a lot like reading a book for me; there’s so much information to process, some of it overwhelmingly so, but eventually I just lose interest and start thinking about better and more active things I could be doing with my life instead.

The film focuses on a young man named Theo (played by Ansel Elgort as an adult and Oakes Fegley in flashbacks), who as a child survives an explosion at an art gallery which claims the life of his mother. Theo is taken in by a family of wealthy Manhattan socialites, among them Nicole Kidman as the family’s reserved mother, but he is soon whisked to Las Vegas to live with his alcoholic father (Luke Wilson) and his girlfriend Xandra (Sarah Paulson). As an adult, Theo works as a salesman for antiques shop owner Hobie (Jeffrey Wright), and is engaged to wed Kidman’s daughter – but he has carried a devastating secret since the day of the bombing, and that’s the fact that, in the wake of the explosion, he took an extremely valuable painting which has since thought to have been lost. That painting is, of course, The Goldfinch by 17th century painter Carel Fabritius, who died in an alarmingly similar manner to the explosion in this story, and whose own life is probably a much more interesting and engaging one than what we get in this movie.

It is a consistently flat experience, with nearly everything from the plot to the characters to the performances all being either numbingly dull or two-dimensionally portrayed, leaving little room for anyone to actually care because there’s such little life to any of it. Most of the actors seem to struggle as they try to find anything worth salvaging from their thin character descriptions, with director John Crowley not giving them enough lively direction to make their performances stand out in any right way; Nicole Kidman, for instance, is supposed to be playing this quiet and reserved socialite, but her body movements and line deliveries are so robotic that you can practically hear the mechanisms whirring as she appears to be doing normal human things. There are a lot of performances like this from other good actors who are given very little to work with, like Jeffrey Wright who has very little character other than to give long and pretentious monologues about the importance of art, and especially both Ansel Elgort and Oakes Fegley as the respective older and younger versions of the protagonist, who is this very bland and uninteresting lead that you struggle to find a reason to empathise with other than the fact that he lost his mother in a bombing. The only character that actually succeeded in bringing much-needed life into this movie was Boris, a Ukrainian immigrant who Theo befriends as a kid (Finn Wolfhard) and reunites with as an adult (Aneurin Barnard), because he was a much more interesting character that both actors could find engaging ways to bring him to life, and it just makes you wish that this guy was the lead instead of the blank slate we’re left with as the main character, along with his equally blank supporting cast.

It is also a movie that you can tell, just by listening to ten minutes of it, was based on a book, because it relies heavily on descriptive dialogue that tells you important plot points without ever showing them, and will randomly intersect timelines so that one minute we’re spending time with him as an adult, and the next we’re flashing back to him as a kid. Obviously, I have not read the book that this film is based on (but from what I’ve heard not too many fans of the book are especially pleased with this adaptation), so I don’t necessarily know if it’s structured like this in the written form, but I don’t need to have read the source material to recognise when a movie adaptation is perhaps being far too faithful to the prose; it feels like they copy-and-pasted entire paragraphs from the book into the script, without reorganising it so that it could work in a more visual medium, which is what a movie is supposed to do at the end of the day. There’s almost nothing to this movie that feels like it’s visually trying to tell this story – except from the fact that it’s shot very nicely, which you should expect from veteran cinematographer Roger Deakins by this point – and so, as a movie adaptation, it doesn’t work because it seems like they were trying to be too much like the book. Perhaps by tidying up its messy narrative, giving more depth to these characters, and making the story pop on the screen as it presumably did on the page, then maybe this wouldn’t have been the two-and-a-half hour slog that it sadly has become, and would have been far more accessible to audiences instead of bombing hard at the US box office with a $2 million opening weekend intake on a $45 million budget.

I may not be much of a reader, but The Goldfinch certainly replicated the exact feelings of disinterest and boredom I usually get when I attempt to read a book, which I’m almost certain isn’t the intended feeling one gets when sitting down to read.

The Goldfinch is a flat and dull adaptation of the bestseller, which leaves most of the actors and the filmmakers with thin material to try and bring to any sort of life because it’s so boring you’d rather watch a painting dry.

Want to decide what the movie’s like for yourself?
Check out The Goldfinch showtimes in London
via