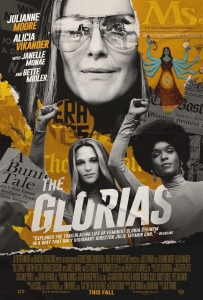 BASICALLY…: Various incarnations of activist Gloria Steinem (Moore, Vikander, Wilson and Armstrong) swap life stories with each other on a bus…

With her new film The Glorias, director Julie Taymor has high ambitions to create a Gloria Steinem biopic like no other. Her take on the multifaceted life of the iconic feminist and political activist is filled to the brim with intriguing ideas, stylistic choices, and the occasional dip into surreal territory, all of which the very visual director utilises to the best of her ability to tell as straightforward a decades-spanning narrative as she can.

The thing is, though, out of all those ideas that she clearly had for this movie, Taymor couldn’t simply choose one or two to go with; instead, she went with ALL of the ideas, and very quickly you see how that can lead to it feeling rather busy and overcrowded, even when there’s arguably very little going on in the moment.

One of the film’s many wraparound segments sees multiple versions of Steinem from across different ages – one as a young girl (Ryan Kiera Armstrong), a tween (Lulu Wilson), a young woman (Alicia Vikander) and a middle-aged woman (Julianne Moore) – travelling together in a black-and-white coach to an at-first unknown location. All of these Gloria Steinems actually interact with one another, and through them we see different parts of Steinem’s life play out; as a young girl, she moves around the country with her family; as a tween, she cares for her ailing mother; and as a young woman, she gets her start in journalism through her infamous exposés of Playboy and her reporting on the Civil Rights Movement as well as the advancement of her activism for women’s rights, something that continues well into her middle-aged years and beyond.

All the while, the Glorias of The Glorias inquisitively ask each other if they made the right decisions along the way, including the oft-repeated questions by male reporters as to why she wasn’t married and had no children, and if what she accomplished throughout her life and career actually did end up furthering the overall cause. Taymor’s inclusion of this particular narrative strand is a very interesting one, as it allows Gloria Steinem the chance to have her own selves debate one another about their choices and what they would do differently if given the option, thus furthering her character somewhat and adding some intriguing new dimensions. Unfortunately, like most other elements in this movie, it is far too often drowned out by the multitudes of other directions that it’s eager to take, and so it serves as only one in countless other stylistic choices that the director has opted to experiment with in addition to what she’s already playing with.

It isn’t entirely fair to say that the film as a whole is an absolute cluster; Taymor definitely knows what she wants to say here about not just Steinem’s legacy but also the fight for gender and social equality at large, and she also exhibits strong ambitions in how she presents her unique vision. However, it is definitely an overstuffed movie, like a gladiator arena where several individual ideas constantly keep fighting each other to assert full dominance in this director’s overall execution. You can feel an intense game of tug-of-war being played by itself as the editing randomly switches focus to when she’s a young woman travelling about India, only then for it to cut back to when she’s a tween and engaging in a tap-dancing number in a barbershop, and then later on when she’s raising awareness of abortion rights, it suddenly switches right back to her adventures in India. It can be very difficult to keep up with all of this non-linear storytelling, especially when it suddenly decides to dabble in some out-of-nowhere fantasy sequences where the Glorias all come together to enact something right out of The Wizard of Oz as directed by David Lynch, and a later sequence where Moore’s version of Steinem runs down a road like it’s a treadmill in a mid-80s music video. Put bluntly, it’s a lot to absorb.

There’s so much going on in this movie from the stylistic choices to the number of life events in Steinem’s life that several points tend to get overlooked. Characters played by the likes of Bette Midler and Janelle Monáe come and go during certain intervals, and in Monáe’s case she just drops out of the movie entirely at one point, while a fair few of Steinem’s early career highs like her undercover exposure of the horrific working conditions for Playboy waitresses aren’t given as much attention or weight as they perhaps deserve. The movie is so overrun with ideas that sometimes it even forgets to be a movie, and just turns into a series of loosely-connected vignettes showing random segments from Gloria Steinem’s greatest hits catalogue.

As frenetic as the movie often can be, it’s easy to admire the ambition that Taymor clearly has for this project. She has very obviously aimed high here, and even when the movie doesn’t quite work it’s still fascinating to see how the filmmaker has really gone out of her way to make her movie as extravagant and unique as she possibly can. The performances, too, from each of the Glorias all compliment each other wonderfully (sometimes in a literal sense), and they are given strong enough material to work in some really powerful moments even amidst the business of the script and direction.

For that, I simply cannot write this film off as a failure; it’s certainly got far too many ideas it wants to throw at you all in one go, but each one of them does have potential and you can feel the ambition in this filmmaker in trying to make them all work, even when they don’t exactly provide all the right results. Instead, I’d put it down as a wildly fascinating experiment, one that both honours and respects the legacy of Gloria Steinem with as much uniqueness as the woman herself often brought, but also manages to splatter itself all over the place with plenty of ideas that might have been way too much to handle.

The Glorias is a highly ambitious attempt by filmmaker Julie Taymor to document several aspects of activist Gloria Steinem’s life and legacy, though it perhaps tries to tackle too many intriguing ideas at once for it to fully work.

The Glorias is now available on Sky Cinema and NOW TV.