The Girl in the Spider’s Web (Review)

The Girl in the Spider’s Web (Review) 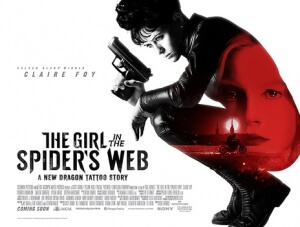 One of the most harrowing scenes in Stieg Larsson’s The Girl with the Dragon Tattoo – and if you know that story, that’s really saying a lot – is when our heroine, socially awkward hacker Lisbeth Salander, is anally raped by her sexually abusive legal guardian in exchange for access to her own riches.

It’s an extremely uncomfortable scene in any version of the story, whether it be Larsson’s novel or either one of the two feature adaptations of that particular book (the native Swedish version starring Noomi Rapace as Salander, or David Fincher’s version with Rooney Mara in the same role), so it pains me to use it as an analogy to describe The Girl in the Spider’s Web, director Fede Álvarez’s new follow-up based on the series continuation novel by David Lagercrantz after Larsson passed away in 2004; just imagine that the evil, sadistic rapist is main distributor Sony, and that Salander represents not just herself but the entire ethos that Larsson’s book trilogy established. In that sense, with The Girl with the Spider’s Web, Sony has essentially sodomised the very essence of the character of Lisbeth Salander for something so far removed from who she is that she no longer feels recognisable, in a story that becomes increasingly far-fetched and unfitting for a universe built up to be as dark and gritty by the original author.

I felt genuinely uneasy watching this movie as a result, and not from what was actually happening in the movie; I just couldn’t believe what an utter betrayal this movie was to a character that stood out for all the reasons this movie goes against, and I really hated this movie for that and other lacklustre qualities.

In this particular story, Salander (now played by Claire Foy) still does her hacking duties as job-slash-hobby, while also acting as a vigilante that hunts down powerful men who abuse women. When she is tasked by former computer programmer Frans Balder (Stephen Merchant) to hack into the National Security Agency in the US and retrieve software he had developed that can access the world’s nuclear launch codes, she is soon apprehended by masked assailants who steal her laptop and with it the software, and then leave her for dead. Now in a position where she is being hunted by the assailants as well as the government, she must use all of her resources to confront and stop the woman behind this plot: Camilla Salander (Sylvia Hoeks), Lisbeth’s estranged sister.

I know that Larsson’s original two follow-up novels, The Girl Who Played With Fire and The Girl Who Kicked The Hornet’s Nest – both of which were also adapted for the screen in Sweden with Rapace once again starring as Lisbeth Salander – also dove a lot more into the character’s dark and disturbing family history, often with mixed results, but at the very least those stories, and subsequently those two film adaptations, stayed true to who Lisbeth Salander is; a lowly, socially awkward woman who is very likely on the autistic spectrum but nonetheless does the right thing without often attracting too much attention to herself. There are very little of those character traits present in this film, which basically turns her into an indestructible superhero whose hacking skills are far beyond even the most advanced skills of any hacker (she breaks into the systems of both the NSA and a major airport like they were nothing, and with such exact precision and timing that wildly test the suspension of disbelief that audiences have been granted here), and whose personality here is basically that of a mix between Jason Bourne and John McClane from the later Die Hard movies. While Claire Foy does what she can in the part, and to her credit she is a good enough actress to pull a lot of this ludicrous stuff off, she is still saddled with a character who seems to have been intentionally written to be as far removed from Larsson’s original creation as possible, now moulded into something unrecognisable by a studio who clearly doesn’t understand the original version’s appeal and just wants to cynically promote her to being their new streamlined action hero in a post-Me Too world, even when that was never really what she was intended for.

But the film’s problems extend way beyond what they have done to Salander’s character, including a story that tends to rehash elements from the other Larsson books (for instance, she is framed for a crime and must go on the run from the authorities during which she also confronts her villainous family, just like she spent the majority of the last two books doing), gets way too ridiculous and action-oriented further down the line (like I said, the launch codes for the world’s nuclear weapons are a big part of this story; wasn’t this originally just a story about a journalist investigating a decades-old missing-persons case? When the hell did they decide to bring something as big as nuclear weapons into all of this?), and unnecessarily brings back characters who absolutely do not need to be here. Mikael Blomkvist, the aforementioned journalist who was a co-lead in the original Girl with the Dragon Tattoo story but had less of a role in the following two books, is forced into this story when he really contributes nothing, and is clearly only there because outside of Lisbeth he’s the only other character people recognise from this series. Even more distracting is how they’ve recast him with someone significantly younger than most people associate the character with; previous inhabitants of the role included Daniel Craig and the late Michael Nyqvist, both roughly in their mid-40s when they each played the part and suited the role of a slightly aged, somewhat disgruntled journalist perfectly well; but here, by casting the noticeably younger Sverrir Gudnason in the part, it feels like the studio just took some random, young and good-looking guy off the street and gave him the part right off the bat, without once considering that his much more youthful demeanour is undoubtedly going to be a distraction for any audience member, especially if they only know of Daniel Craig being in the part.

Characters also do incredibly dumb things throughout the film – even Salander makes mistakes that seem wildly out of character, although as I feel I’ve established that is the least of what they have done with the character here, and only come together through the most convenient of methods, largely through certain characters’ stupidity. There is a young child character, for example, who is a major part of the story that ends up doing something so reprehensibly stupid in order to kick the climax into gear that every single thing that transpires afterwards, every death and every method of torture, is entirely this kid’s fault (it is stated that this kid has some form of autism, but as someone who’s also on the spectrum I can easily tell the difference between being autistic and being a complete and utter dumb-ass).

It’s an aggressively frustrating movie that also doesn’t benefit from its incomprehensibly-shot action scenes and way-too-fast-paced editing, but an even bigger insult to fans of a character who stood out amongst numerous other literary heroines by turning this character into something she is most definitely not. I really did not like this film at all, which is just another in the long list of films that fit the criteria of “Goddammit, Sony”.

The Girl in the Spider’s Web is a frustrating, sometimes incomprehensible, studio mandate film that betrays the very essence of the great character of Lisbeth Salander as well as the whole ethos surrounding the late Stieg Larsson’s original book trilogy.