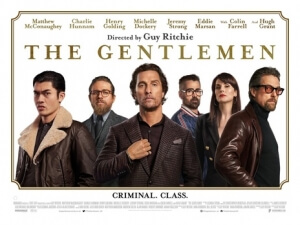 BASICALLY…: A marijuana kingpin (McConaughey) finds his domain threatened by rival gangsters who want to take it from him…

The Gentlemen is the most that Guy Ritchie has felt like Guy Ritchie in a long time. After making several big-budget studio flicks like The Man From U.N.C.L.E, King Arthur: Legend of the Sword and last year’s Aladdin (all of which underwhelmed either with critics or at the box office, or even both), he’s returned to the world of London-based criminal activity that put him on the map in the first place, and with his trademark dialogue and editing tricks all present it’s a welcome return to format.

While the movie itself is entertaining enough, even if it’s not perhaps as innovative as some of Ritchie’s other gangster flicks, there’s something that feels so right about Guy Ritchie being back in his comfort zone, and for anyone who’s stuck with him even in the darkest of periods – whether that be Swept Away or the King Arthur movie – this will be an utter treat.

The plot revolves around American drug lord Micky Pearson (Matthew McConaughey), who for years has grown and sustained a lucrative marijuana empire on several plots belonging to the wealthy upper class. However, he’s eager to close up shop so that he can spend more time with his wife Rosalind (Michelle Dockery), and sets up a potential buyout from wealthy Jewish American investor Matthew Berger (Jeremy Strong) – but word gets out about the deal, and it soon reaches Chinese gangster Dry Eye (Henry Golding) who becomes determined to seize control of the empire by any means necessary. All of this, by the way, is explained via the film’s time-jumping wraparound segment, where devious private investigator Fletcher (Hugh Grant) is carefully laying out his plan to blackmail Pearson for £20 million in front of Pearson’s closest associate Ray (Charlie Hunnam), in the form of a screenplay he has written about the events.

It’s Guy Ritchie at his most traditional, and also at his most meta; many of the trademark Ritchie touches are present and correct, from the lucrative dialogue to the waves of colourful criminal characters which position him as kind of like an East End Quentin Tarantino, but there is a much more self-aware attitude about it than some of his other films, especially his more recent ones. As it usually is with Ritchie films like Lock, Stock and Two Smoking Barrels, Snatch and RocknRolla, this kind of cheeky attitude will be accepted by some and will irritate others, but I definitely had a good time watching it as much as I did those other films, although it lacks a real sense of grittiness that they had. Everything feels just a little too polished, even scenes set in the rougher corners of the city, which doesn’t make it feel quite as authentic as something like Lock, Stock and Two Smoking Barrels and more like someone who’s been away from this genre for a while suddenly making it look like he never left, but you can still see traces of the life he led prior to returning to his roots.

Despite it not feeling entirely like one of his earlier flicks, for now it’s as close as we’ll get to a Guy Ritchie movie that he just doesn’t make anymore, and I had a reasonable amount of fun with it. Mainly, it was cool seeing certain actors play against type as these scuzzy and ratty figures, particularly Hugh Grant who growls and sneers his way through a middling Cockney accent in a role where he’s clearly having the most fun since Paddington 2, as well as Colin Farrell who is nearly unrecognisable as a tracksuit-wearing boxing coach and is great as always. In what might be a surprise to some, Matthew McConaughey doesn’t act typically McConaughey-ish here, largely playing it straight while letting other performers such as Charlie Hunnam, Henry Golding and Michelle Dockery bring a sense of colour to their respective characters; this is a much more intense McConaughey performance than, say, The Beach Bum, which is good because it shows the actor’s range with a more po-faced part like this, but anyone who’s hoping to see this just because they like his laid-back spirit will probably walk away feeling a little short-changed.

While it’s definitely superior to some of Ritchie’s most recent films, this is still a far cry from classic Ritchie. While the acting is certainly solid, and the style definitely feels like his, it’s not exactly something that will be talked about years from now when we’re ranking the director’s greatest hits. It’ll probably be mentioned at least once or twice, but not as much as Lock, Stock and Two Smoking Barrels, Snatch or even Swept Away which, as terrible as it is, has plenty of memorable moments (albeit for the wrong reasons). This movie will largely just be seen as something which is fun and entertaining in the moment, but doesn’t have much to it that sticks out for true lasting power, except for the fact that this is at least a step in the right direction following the disappointments of both King Arthur: Legend of the Sword and Aladdin. Between those two and this, I would much rather watch this again over both of those, but on its own it’s mainly a throwaway reminder that Guy Ritchie can still make the kind of movies that got him famous, though without the genuine spark of his early years.

The Gentlemen is certainly a step-up for Guy Ritchie after his last couple of respective critical and financial disappointments of Aladdin and King Arthur: Legend of the Sword, but while it is an entertaining throwback to some of his earlier work there is not much to it that immediately sticks out like any of them did, aside from the likes of Hugh Grant who’s having plenty of fun sneering his way through a Cockney accent.

Want to decide what the movie’s like for yourself?
Check out The Gentlemen showtimes in London
via